As I watched the 1st Round of this weekend’s NFL Draft, one thing really stood out to me – New Jersey’s got talent.  Of the 32 players selected in the first round, seven of them hail from the Garden State. 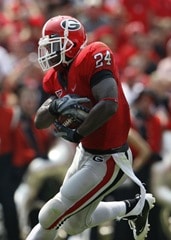 [UPDATE]: Thanks to commenter Curly52 for pointing out that Malcolm Jenkins is from New Jersey as well.  That makes an impressive 7 out of 32 first rounders from the Garden State.

That is a pretty impressive list of talent at some key positions.  Monroe was the 3rd OT selected, Raji the top DT in the draft, Moreno the top RB, and Cushing was the 2nd LB taken.

This year’s draft class largely represents the last half class of Willingham/first half class of Charlie Weis – the class which Weis tried to piece together while he was helping the Patriots win their third Super Bowl title in four years.  Since Weis took over, Notre Dame has recruited New Jersey pretty well – especially over the last few years.

The following players currently on the Notre Dame roster are all products of New Jersey.

Of this list, Kamara flashed NFL potential as a freshman, but regressed as a sophomore in 2008.  With a lot of young talent behind him on the depth chart, Kamara’s chance of adding his name to the draft hopefuls in a  couple years could get slimmer if he doesn’t have a strong fall camp.  Ragone came to Notre Dame as the five star tight end, but injuries have really slowed his development.  Williams has started to emerge this spring at DT for the Irish – could he be another BJ Raji?  That remains to be seen, but after the season raji just had, any Irish fan would love for Williams to follow in his footsteps.

The incoming freshman class represents some possibilities with Stockton, Riddick, and Calabrese bringing a lot of talent with them this year.

With Weis’s ties to New Jersey on top of the ties new Offensive Line coach Frank Verducci brings to the table, Notre Dame should be able to continue to recruit the state of New Jersey well.  Now lets hope that it pays off in the form of some future first round picks like we saw in this year’s draft.