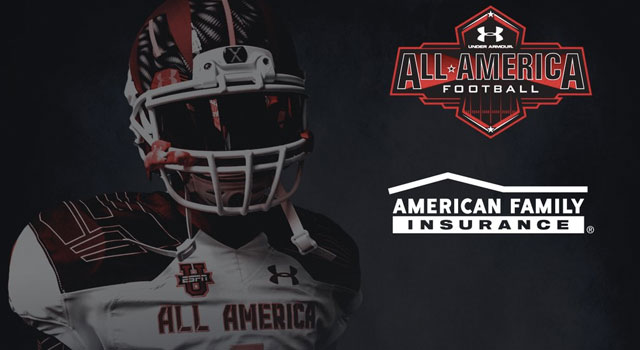 The final results from round one are as follows:

The American Family Insurance “#DreamFearlessly Fan Vote” is a five-week digital media contest that began on Oct. 20 by matching up 32 of the top high school football players in the nation in a bracket-style competition. After round one, 16 players remain. Fans can resume voting for their favorite players starting Nov. 4 at 2 p.m. CT on http://www.amfam.com/dreamfearlesslyfanvote and the athlete with the most votes in each matchup will move on to the next round.

Omnigon’s BracketPro, a fully customizable bracket building software platform, has created an interactive bracket that allows fans to vote for these players by entering the “#DreamFearlessly Fan Vote” web site. One fan can potentially vote for each matchup once per day. Video highlight reels of each competitor on the web site help fans determine their choice. Voting for round two begins Nov. 4 at 2 p.m. CT and concludes Nov. 16 at 2 p.m. CT. The schedule for each voting round will go as follows:

The player that ultimately receives the most votes from each side of the bracket will be selected to play in the ninth annual Under Armour All-America Game presented by American Family Insurance, a nationally televised football competition spotlighting the country’s top high school seniors. The 2016 Under Armour All-America Game is slated for Saturday, Jan. 2 at the Orlando Citrus Bowl and will be televised live on ESPN2 at noon ET.

The 32 “Fearless Dreamers” that began the competition were selected by a committee representing the Under Armour All-America Game. Four players were chosen from each of the eight U.S. regions (Northeast, Mid-Atlantic, Southeast, Midwest, Great Plains, Southwest, West and Pacific Northwest). A complete bracket with matchup details can be found on the “#DreamFearlessly Fan Vote” web site. Round two matchups are as follows: