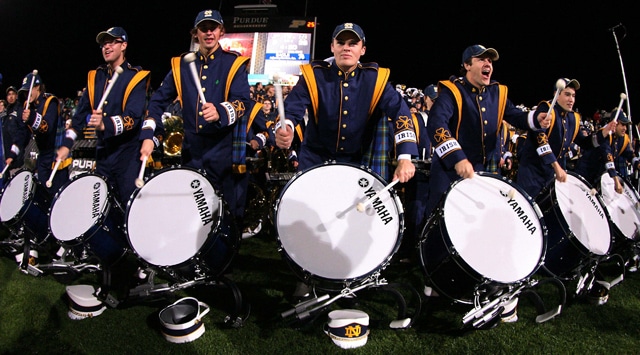 Before the band, and the drum line, perform on Saturdays (shown above), they put on a show for fans in front of the Golden Dome at midnight on the eve of kickoff. (Photo - Brian Spurlock / US PRESSWIRE )

One of the best things about Notre Dame football traditions is that they happen at all times of the day – and night. In fact, one of the biggest events, and a huge fan favorite, occurs at midnight — The Midnight Drummer’s Circle.

At a time when you’d think most visitors to campus would be back in their hotels preparing for game day, the campus is actually teeming with activity. On the Friday night before home games, students and fans alike gather at the bottom of the steps under the Golden Dome and wait for the drummers to arrive. After the bells of the Basilica chime the midnight hour, the drumline arrives and forms a circle within the middle of the crowd, marking the official beginning of game day.

Once in place, the drummers play for the crowd for forty-five minutes, playing the drum cadences that will be played in Notre Dame Stadium during the football game. These include most of the offensive, defensive, and sideline cheers that the band plays throughout the game. They also play the major fan favorites, the Notre Dame Fight Song and the Rakes of Mallow, which often leads to impromptu jigging from the adoring crowd.

The Midnight Drummer’s Circle, like Trumpets Under the Dome, is a fairly recent tradition. It originated in 2000 by members of the Notre Dame Drumline. “The idea of having it at midnight is that it would be recognized as the official kickoff to game day,” says assistant band director, Sam Sanchez. (Excerpt from UND.com )

The original Drummer’s Circle was held at the Stonehenge fountain, on the campus’ North Quad. In 2001 they moved the circle to the Golden Dome, and they have never looked back. After the first two years being a huge success, the drumline was able to get the support of the Student Activities Office, who decided to make the Midnight Drummer’s Circle an official football weekend event. Once the event was embraced and promoted by the Activities Office, the crowds began to grow larger and larger. What started with an original crowd of 40 students and fans now has hundreds and hundreds show up each and every home football weekend, rain or shine.

While admittedly a fairly new tradition, The Midnight Drummer’s Circle is a must-see attraction for any visitor to campus during a football weekend. It exemplifies the spirit and tradition that is Notre Dame, and allows fans to integrate themselves and celebrate with the student body, right under the most iconic building Notre Dame has to offer.

A big thank you goes out to Tyler Moorehead for his editing help & perspective on this story. Tyler is a Senior English major at Notre Dame (& writes for CollegeSpun.com). You can catch Tyler on Twitter at — @Tmoorehead627

You can also read his his latest piece on Manti Te’o over at CollegeSpun.