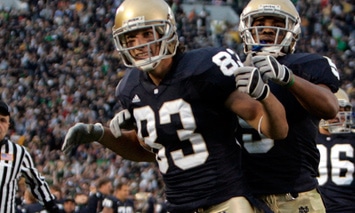 We move into the top 5 of our countdown and switch back to the offensive side of the ball after back to back selections on defense.  Our 5th best player of the 2000’s was a little known, under used wide receiver until Charlie Weis and his prostyle offense came to town.  Two years later, Jeff Samardzija virtually rewrote the Notre Dame receiving record book.

Samardzija is the second player on our countdown from Tyrone Willingham’s lone successful recruiting class of 2002 joining Tom Zbikowski, our #10 player.  He committed to Notre Dame fairly early on in the recruiting process and there never really was a doubt where the Valparasio, Indiana native would end up.  He saw playing time immediately as a freshman appearing in all 12 games in 2003 while recording 7 catches for 53 yards and making his presence felt on special teams.

Samardzjia’s sophomore year followed a similar pattern to his freshman year in that he made plenty of special teams appearances but did not see a whole lot of time at wide receiver – that is until the Insight.com Bowl anyway.  Samardzija recorded 5 of his 17 receptions and 89 of his 274 yards on the season against Oregon State in the bowl.  It was only a sign of things to come as Samardzjia was about to explode on the college football landscape under then first year head coach Charlie Weis.

In the 2005 season opener, the debut of the Charlie Weis era at Notre Dame, Samardzija was Notre Dame’s third receiver behind Rhema McKnight and Maurice Stovall, but it was Samardzija that stole the show with an acrobatic, diving catch in the back of the end-zone during a second quarter that blew the doors off of Pitt and skyrocketed expectations for the Irish and Weis.   McKnight’s knee injury in the second week of the season opened the door wide open for Samardzija and his seized his opportunity.  Samardzija’s athletic grab was again just a sign of things to come as ridiculous highlight reel catches became the norm and it became more surprising when the Shark failed to make a crazy catch than when he did.   Against Purdue, Samardzija nearly put together a career’s worth of highlights including a ridiculous one handed, diving catch that I still don’t know how he came down with it.  In the ’05 epic showdown with USC, Samardzija hauled in a 32 yard deep ball from Brady Quinn to tie the game at 14.  Samardzija also started the ’05 finale against Stanford off with a bang with a 80 yard touchdown on the second offensive play of the game.

Throughout the course of the season Samardzija set then Notre Dame records with 77 catches; 1,249 yards; and 15 touchdowns.

Samardzija saw his production dip slightly in 2006 as defenses began to adapt to Weis’s offense and playcalling but he still put up 78 catches – breaking his own record at the time – and his second straight 1,000 yard season with 1,017.  He also added 12 more touchdowns for another then Notre Dame record for 27 career scores (Michael Floyd has since topped Samardzija with 28 and counting).   Despite the slight fall-off in production, Samardzija recorded his signature moment in a Notre Dame uniform as a senior in 2006 when he hauled in a Brady Quinn pass around the 30 yard line, made a defender miss and raced into the end-zone to score the game winning touchdown against UCLA with just 27 seconds remaining.  The play was just the third time Notre Dame ever won a game in the final 30 seconds with a touchdown and the first time in 14 years.

Why Jeff Samardzjia is on the countdown

At this point in the countdown we are beyond explaining why players like Samardzija are on the but list, but rather why they are ranked where there are.  There have been a number of very good wide receivers to pass through Notre Dame over the last 11 years – some of the greatest that have ever worn the Blue and Gold – and finding Samardzija’s place among them was a bit difficult since he only really had the two years of production under Weis after his talent was wasted by the previous coaching staff.

Of all of the great wide receivers that we’ve seen over the last decade or so, three stood out above the rest – Samardzija, Michael Floyd, and Golden Tate.  How to rank the three proved to be a very difficult task.  At the end of the day though, we settled on Samardzija ranking third among the trio of great wideouts for the Irish.  First off, Floyd and Tate have both broken several of Samardzija’s records already and it could be argued that both played on slightly less high powered offenses – especially Floyd who’s 2008 and 2010 offenses couldn’t compare to the 2005 or 2006 offenses.

Secondly, when comparing Samardzija to Tate its tough to make a case for the Shark to get the nood.  Tate won the Biletnikoff as a junior and had a clearly superior season in 2009 than Samardzija’s 2005 campaign despite not having a legit #2 threat to take pressure off of him for most of the year while Floyd sat out with an injury.  If you look at the pair’s second best seasons (2008 for Tate and 2006 for Samrdzija), they are fairly even – Samardzija had more catches and a few more touchdowns, but yardage was similar and Tate contributed and additional 637 yards in returns.  Tate had the stats, awards, and records over Samardzija.

The harder case was to distinguish Floyd and Samardzija.  Up to this point, Floyd and Samardzija’s numbers are extremely similar.  Floyd has more touchdowns and is right on Samardzija’s heels for yards and receptions.  The tipping factor here was games missed for injury.  Had Floyd not missed significant playing time throughout his career, he’d very easily have surpassed most, if not all of Samrdzija’s totals by now.

All of that said, by the time Samardzija had left Notre Dame he had rewritten the Notre Dame receiving record books.  As mentioned, many of his records have since been broken but his place in Notre Dame history will never be forgotten as one of the all time greats – if only he had not wasted a redshirt his freshman year or had competent offensive coaching his sophomore season.

And more of his career highlights

Throughout Samardzija’s Notre Dame career he was a dual sport athlete and after exhausting his eligibility, he surprised many by deciding to focus his professional career on the baseball diamond instead of the gridiron.  Samardzija had already spent the past few summers in the Chicago Cubs farm system as a pitcher and in the spring of 2007 he made the switch to baseball full time.  Many had projected Samardzija as a potential first round draft pick in the ’07 NFL Draft had he opted for football, but the allure of playing for his childhood favorite Cubs was too much to pass up.

Samardzija made his Major League debut in 2008 and put up some impressive performances.  In 26 appearances that season Samardzija posted a 2.28 ERA with 25 strikeouts in 27 2/3 innings while putting together a 1-0 record.  Since then, however, Samardzija has battled consistency issues and has posted back to back 7.50+ ERA seasons in 2009 and 2010.

This season Samardzija is back on track with a 3.78 ERA and 5-4 records out of the bullpen and has made a career high 37 appearances and we’re not even at the All Star break.  Samardzija has greatly reduced his WHIP (baseball talk for the average number of hits and walks allowed per inning) back to the levels it was at in 2008.  The one area Samardzija is still struggling this season is in issuing walks.  In 47 2/3 innings he’s given up 34 walks, but at the same time his strikeout rate is at a career high.