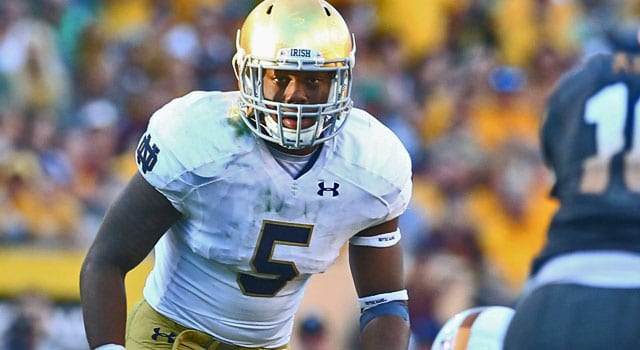 The long national nightmare known as “summer” is almost over and the wait for football is coming to an end.  Notre Dame kicks off its 2016 season in just a few days and the Irish will be looking to win 10 games in back to back seasons for the first time in 23 years this fall.  By now you all know all of the story lines so it’s predictions time.

1. Nyles Morgan will have 100 tackles

By half-time of the season opener, we may all be wondering why Morgan didn’t play more in 2015.  Well, we’re all actually wondering why that is already, but by half-time in Austin we’ll just be wondering even louder.  Morgan racked up tackles as a true freshman filling in for Joe Schmidt when he barely knew what he was doing.   Morgan has by all accounts had a dominant camp and looks ready for a breakout season.  To reach 100 tackles, Morgan will need to average just 7.7 a game.  That won’t be a problem.

2. CJ Sanders will score a touchdown rushing, receiving, and returning

I am a big fan of CJ Sanders.  Last year he returned both a punt and kickoff for touchdown.  In 2016, Sanders will get at least one return touchdown this year (most likely more than one) while adding both a receiving and rushing touchdown as well.  With Sanders’ speed and dynamic ability in the open field, he is going to be a lot of fun to watch this year.  Sanders took over the #3  jersey from Amir Carlisle.  Don’t be surprised if he makes bigger plays than his predecessor already this fall.

Miles Boykin won’t start for Notre Dame this fall baring injuries, but he will score more touchdowns than at least one starting wide receiver.  Boykin is a monster of a target and while he needs work to round out his game, I can’t think of a single reason for him to not be a primary target for Notre Dame in the red-zone this year.  Boykin won’t have as many catches as his fellow classmate receivers, but he will make the ones he makes count.

4. Daelin Hayes will have at least 6 sacks

Maybe I’ll file this into a prediction based on hope, but if all accounts of Hayes are even close to true, he could be the type of pass rushing threat Notre Dame desperately needs.  Reaching six sacks as a true freshman isn’t out of the realm of possibility either.  Prince Shembo had 4.5 as a freshman in 2010 and Aaron Lynch had 5.5 in 2011 as a frosh.  Hayes will be counted on as more, if not more than either of them were as freshmen.

5. Jarron Jones will have 15 tackles for loss

I was expecting a huge season out of Jones in 2015 before his MCL injury.  My expectations were tempered a bit when Kelly spoke so cautiously of him in his opening camp presser, but as camp has worn on, Jones has started to emerge again.  The injuries he suffered could make for a slow start in 2016, but by the end of the season Jones will be back to looking like the man-child he looked like that October night in Tallahassee back in 2014.

6. And so will Isaac Rochell

Jones won’t be the only monster on the defensive line for Notre Dame this fall.  Isaac Rochell is primed for a big time senior season as well.  Much like Sheldon Day in 2015, Rochell will essentially double his previous career high in TFL this fall.  Rochell reportedly played with some minor, nagging injuries that limited his work in the weight room the last few seasons.  Rochell might still be more of an interior lineman than a SDE but he will have a monster season this fall.

7. Nic Weishar will lead the tight ends in receptions

With Alize Jones lost for the season due to suspension, Notre Dame is in need of someone to emerge at tight end.  While Durham Smythe is the more complete tight end and better inline blocker, Weishar is the most athletic tight end on the roster for the 2016 season.  Weishar got lost in the mix with all of the excitement over Alize Jones a year ago, but people tend to forget he drew a lot of favorable comparisons to Tyler Efiert coming out of high school.  Weishar will emerge as a pass catching threat for Notre Dame at tight end this season and lead the group in receptions.

Notre Dame nearly had a pair of 1,000 yard rushers last season with CJ Prosise topping 1,000 and Adams coming up just a bit short.  Even with Tarean Folston back from injury this year we’ll see both backs get plenty of carries.  Notre Dame will run the ball early and often in 2016 and if both backs stay healthy, they both should top 1,000 yards this season.  If you think that’s far fetched, the Irish almost did it a year ago and would have done it in 2013 with Jonas Gray and Cierre Wood as well had Gray not gotten hurt on Senior Day.

Even with all of the running, Notre Dame will still find time to pass.  Brian Kelly always finds time to pass the ball.  When the Irish do put the ball in the air, Torii Hunter will be the leading receiving and will top 1,200 yards.  That number might seem high given that Will Fuller barely topped 1,200 last year, but Notre Dame had a deeper group of receivers last year.  Hunter is the most experienced receiver by far and will be the go to option for whoever is throwing the football for the Irish.  What Hunter won’t have this fall are Fuller’s highlight reel touchdowns.  Hunter is a different receiver and won’t get behind defenses as much.  He will rack up more receptions than Fuller had last year though and as a result will pile up the yards.

10. Malik Zaire will eventually be the starting quarterback

Speaking of quarterbacks, I’ve kept relatively quiet about the quarterback derby and Brian Kelly’s decision to play both Malik Zaire and Deshone Kizer against Texas so it’s time to change that.  Look for Zaire to be THE quarterback for Notre Dame by the end of the season – probably much sooner.  It’s not that Kizer isn’t capable.  He’s a future NFL quarterback.  Zaire just has the “it” factor that isn’t quantifiable in any stat or distinguishable in any practice.  When the lights go on Sunday night in Austin, Zaire will light up the South Texas sky just as he did a year ago to the Longhorns in South Bend.

Even with 12 new starters.  Even with an unsettled quarterback situation.  Even with a defense that has underwhelmed despite NFL talent.  Notre Dame will win at least 10 games this year.  On paper, there isn’t a single game in which Notre Dame will be outmanned this year.  Between having just three true road games and facing a slew of first time starting QBs and first year head coaches, Notre Dame’s schedule is set up for it to go on another run.  IF – and it’s a big IF – Notre Dame can avoid an early season hiccup, the Irish will be a damn tough team to beat by the time the roll into Los Angeles Thanksgiving weekend.

Week 1 currently scares me the most because of all of the moving parts, but since Texas isn’t exactly the model of stability right now, the Irish should be able to get by the Longhorns and set the stage for a playoff run in 2016.   They will need a little bit of the luck of the Irish to make the playoffs though.  I expect Notre Dame to cap its regular season 11-1 and that won’t be enough to make the College Football Playoffs unless one or two opponents vastly outplay their pre-season projections.