Welp, that post from this morning looking at reschedule options for the Notre Dame – Wake Forest game didn’t have a very long shelf life. Notre Dame and the ACC announced on Wednesday that this weekend’s game has been moved to December 12.

Here is the full release.

The Atlantic Coast Conference announced today that the Notre Dame at Wake Forest football game will be rescheduled for Saturday, December 12. The game was originally scheduled to be played Saturday, September 26.

The rescheduling follows the positive tests and subsequent quarantining of student-athletes within the Notre Dame football team. The conference and team are adhering to the outlined protocols within ACC Medical Advisory Group report, which is available on theACC.com (full report).

The Campbell at Wake Forest game that was originally scheduled for Friday, October 9 will now be played Friday, October 2. The game will be aired on ACC Network at 7 p.m.

As was previously announced, the 2020 ACC Football scheduling model includes 11 games (10 conference plus one non-conference). The 11 games will be played over at least 13 weeks with each team having two open dates. The two open dates for each team allows flexibility, when possible, to make necessary adjustments. Game times and television selections will be released in the future.

Notre Dame still has two bye weekends left but their margin for error is razor thin with one of those being 10/3 – likely too close to this outbreak to play football and the other being 11/21 – finals week at Notre Dame which has traditionally been off limits for fall sports. 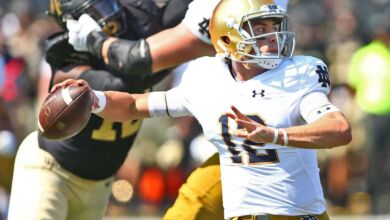