For 29 minutes on Saturday, it looked like there would be a storybook start to the beginning of the Marcus Freeman Era. Instead, the following 31 minutes turned Freeman’s first game into a nightmare. Still, there was a lot to like in Notre Dame’s loss to Oklahoma State, even if the bad outweighed the good, and that damn BCS/NY6 bowl streak is still very much alive and haunting Notre Dame.

The Notre Dame wide receiver room is about to be a damn mess. Transfers, injuries, and bad recruiting have decimated the room and likely will lead to a new voice in charge of the room soon. One of the few bright spots, however, is Lorenzo Styles. The freshman wide receiver had his breakout performance in the Fiesta Bowl and looked every bit the part of a future WR1.

Styles led Notre Dame in both receptions, 8, and yards, 136. Both were career highs for a receiver who is just scratching the surface of his potential. His previous highs were 74 yards (UNC) and four receptions (Stanford).

With Kevin Austin officially off to the NFL, Styles is Notre Dame’s WR1 for 2022. One thing to keep in mind heading into the off-season is Styles played in a run-heavy offense in high school, so he is just getting started.

Before the wheels came off on the Notre Dame offense, I really liked how Tommy Rees used Chris Tyree as a wide receiver and expect to see him in that role a lot in 2022. With the numbers what they are at receiver, motioning Tyree out to the slot in two-back sets will be a staple of the Irish offense.

The jury is still out if Tyree is an every-down RB1, but there is no doubt that he is a dangerous weapon who needs the ball a lot. He ended the Fiesta Bowl with six catches for 115 yards, including a 53-yard touchdown on a perfect call against the Oklahoma State blitz.

Expect to see a lot of Tyree as a receiver out of the slot in 2022.

Notre Dame’s defense had a second half to forget in the Fiesta Bowl, but when the Irish needed a miracle play, Isaiah Foskey delivered one. All Oklahoma State had to do was not turn the ball over with three minutes left and the ball in the redzone. Isaiah Foskey came up with a massive forced fumble on Spencer Sanders that could have been the turning point in a comeback, but unfortunately, the offense couldn’t capitalize.

The offense failing to turn Foskey’s heroics into a go-ahead score shouldn’t diminish how big of a play that was, though. It was perhaps the biggest play of his Irish career.

What a play by Isaiah Foskeypic.twitter.com/m8lXYxzn9l

Notre Dame now waits for Foskey’s decision on whether or not to return for his senior year, but if he does, he will be an All-American candidate and potential 1st round pick in 2023.

When we learned that Josh Lugg would miss the Fiesta Bowl, I openly wondered just how many snaps Blake Fisher could handle after a four-month layoff. Little do I know that Blake Fisher was a damn superhuman. Not only did Fisher play all 91 snaps, but he also played really well.

After a four-month layoff following his knee injury, Notre Dame asked Blake Fisher to play 91 snaps, including 72 dropbacks. The fact that Fisher managed to play them all is positively bonkers. No one should lose track of how incredible of a feat that was for Blake Fisher because there are very few humans who could have done that.

Between Fisher and Joe Alt, the Notre Dame offensive line will be bookended by two literal monsters for at least the next two years. That is something to love, not like.

Notre Dame asked Jack Coan, a quarterback without much mobility whose previous career-high in attempts was 35, to drop back 72 freaking times on Saturday. He responded with a Fiesta Bowl record of 509 yards which were also just 17 yards shy of tying Joe Theismann’s program record. He was a hair away from adding another 70 or so on a deep bomb to Lorenzo Styles that was oh so close to connecting.

There’s been a lot of Jack Coan slander on Twitter since Saturday, which blows my mind. Yeah, the offense stalled in the second half, but all Coan could do was run the plays that were called. Oklahoma State adjusted, and he had to be damn near perfect to move the ball – and he almost was. Anyone expecting Coan to be perfect on 68 freaking attempts is unrealistic.

Coan had over 500 yards and five touchdowns, and people are criticizing the kid like he’s the reason Notre Dame lost. STOP. I openly called for more Tyler Buchner throughout the season, and even with Coan having the game he did, I think it was a big miss of Rees to not insert Buchner for plays in the second half to jumpstart the running game. But, Coan played out of his mind on Saturday and turned in an all-time performance. Hats off to him for a hell of a game.

Podcast: Breaking Down Notre Dame's Fiesta Bowl Collapse And Looking Ahead to 2022 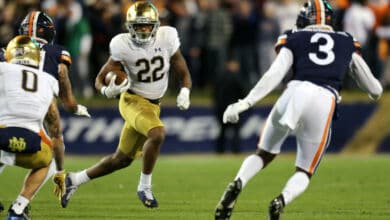