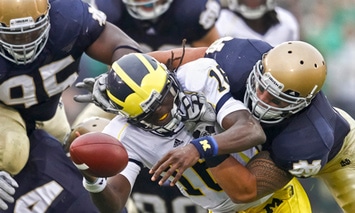 Her Loyal Sons hosted this week’s Irish Blog Gathering.  HLS has a special disdain for Michigan and I think you’ll see it come out in their questions.  Not that there’s anything wrong with that.  Head over there and check out all of the other responses when you’re done here.

1) Well that result really sucked. Please describe how you feel about the loss using lyrics from a pop diva (eg Brittany Spears, Rihanna, etc) song. Bonus points for video or pictures. (something good has to come out of last week)

Sorry, but I got nothing here.  Wish I could have thought of something good here but I just spent all day in airports and the brain isn’t working so well right about now.

2) While we all want to move on, last week’s game can teach us many things about the ‘11 Irish. After seeing what Week 1 brought us, do you find yourself more confident, less confident, or still confused as hell about our chances vs the Skunkbears? Why?

I am still confused because I really don’t know what Notre Dame team will show up this weekend.  Will we see the confident group that ended last year 4-0 or the squad that looked unfocused and undisciplined last week?  For as good as the defense looked at times too I am a little concerned that South Florida didn’t really do much to confuse the Irish defense and didn’t really provide the great preparation for Denard Robinson most thought they would.

I really don’t think anyone knows exactly what we have with this year’s team yet.  Notre Dame can obviously move the football between the 20’s, but what happens when they get inside the 20?  I like to think that last week is just going to be an aberration when we look back on the season, but there were too many red flags raised for me to be very confident this weekend.

3) Other than QB, which position group pleasantly surprised you this past week? Which disappointed? What player absolutely MUST see more time in Week 2? Again, no QBs.

Jonas Gray’s fumble aside, I would say I was most surprised with the effectiveness of the running game.  Cierre Wood is much improved over a year ago and looks like he is going to silence any critics he’s had over the years who have suggested he isn’t an every down back.  He ran hard, was elusive, and finished his runs.

The punting team is too easy to list as a disappointment so I will go with the safeties.  Zeke Motta and Jamoris Slaugher were both unimpressive last week and Harrison Smith’s back to back face mask penalties were just unacceptable for a 5th year senior captain.

4) Tommy Rees will lead the Irish Offense this week. Do you agree with Coach’s call? Either way, what part of Crist’s game will the Irish O miss the most, if any?

I agree with Kelly’s call to go with Rees.  As much as I’d love for #10 to lead the Irish to a win this weekend, you just can’t ignore the production Rees had in the second half last week.  He gets the offense, plays within himself, and makes quick decisions.  His decision making is the biggest difference between the two quarterbacks in my opinion.  Crist was often too hesitant and that is what cost him in terms of bad throws and drops.

The biggest part of Crist’s game we’ll miss is his downfield arm.  Rees’s arm strength improved since last year, but Crist can really stretch a defense was the cannon he has.  Remember his throw to Kyle Rudolph last year to give Notre Dame a short lived lead in Notre Dame Stadium?  Yeah, Rees isn’t making that throw unless he pulls the trigger much sooner.

5) What’s the key to beating the Wolverines this week? Just 1 thing. Not 2. 1. I have to agree with Her Loyal Sons and say stopping Denard Robinson.  Robinson is really Michigan’s only chance against Notre Dame’s defense and if we are being honest, he does give them a very good chance.  If you don’t think he does, just look at the tape from last year’s game and you’ll be reminded of just how bad he can make a defense look.  If Notre Dame contains Robinson and doesn’t have to go in comeback mode, they will be able to run the ball and wear down the Michigan defense.

7) Michigan: Just Another Opponent, Enemy, or Rival? Explain. 1 Bonus point for each use of the word ’suck’. Pretty sure I made my feelings about this question clear in an old column I wrote back in 2006.

8 ) It’s Michigan week. Name 1 thing in the world that sucks as much as Michigan, if you can.

The sequel to Boondock Saints.  Has anyone seen it?  I watched, or tried to watch it, on Netflix a few weeks back and it might have been the worst movie I have ever seen.  I LOVED the first one and used to watch it all the time back in college when I was working on projects, but the sequel was beyond awful.

9) RichRod is back, announcing for CBS. Can’t wait to see how that goes. Bet he’s horrible.

Well he can’t be any worse at announcing as he was at coaching Michigan… can he? What’s really sad about that is he was still somehow 2-1 against Notre Dame. Sigh.