Louis Nix Will Play for Notre Dame This Weekend 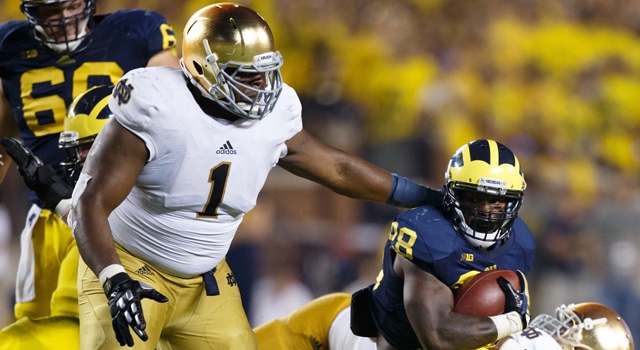 After missing the last two weeks with a knee injury, Notre Dame All-American nose tackle Louis Nix will play this weekend when the Irish travel to Pittsburgh to take on the Panthers in Heinz Field on Saturday night according to head coach Brian Kelly.

“He will play,  and it’s not hypothetical. He had a good week of practice – a full week of practice.  Moved around well, and was in the training room all week,” Kelly said on Thursday.  “Thursday is our 48-hour meeting with our medical staff, which is where we get our pretty definitive idea whether our guys are going to be full strength, and everybody feels like he is going to be good to go.”

With all of the injuries Notre Dame has suffered upfront, getting Nix back will be a huge boost for a defense that gave up over 300 yards on the ground to a much smaller Navy offense a week ago.  Since Nix has been out, Kona Schwenke and Ishaq Williams have both gotten hurt and Sheldon Day has been limited at times as he recovers from his high ankle sprain suffered earlier this season.  Schwenke and Williams will both be out this weekend making Nix’s return all that much more important for Notre Dame.

Nix originally suffered his injury against Southern Cal and after missing the last two games, Notre Dame’s cog that makes it’s defense go is ready to get back on the field.   “He was antsy last week,” Kelly said of Nix.  “The first week he was okay. He needs to be around the team. You know, he’s a guy that obviously football is so important to him. He is close to finishing his degree so a lot of his focus is about being with his teammates and being around football. I think the first week it was kind of, ‘Hey, this is some time off.’ The second week, he was around and he was on the sideline this past weekend and into the ballgame. So I think if you asked him, he is back where he likes to be,” Kelly added.

With Nix back int he starting the lineup the next focus is on the backup nose tackle position with Schwenke ruled out for this week.  Instead of 5th year senior Tyler Stockton, Brian Kelly said on Thursday that sophomore Jarron Jones will slide inside to back up Nix – a move that might not be temporary for Jones after he saw some time at the position against Navy.

“I’d say, standing here right now, that’s is a good possibility,” Kelly said when asked if Jones could end up playing the nose tackle position.  “He played pretty good against Navy.  We were pleased with his play.  He’s a big, thick kid that we just need to continue to develop. We feel like he can go in there and hold his own and contribute,” Kelly said of Jones time at the nose last week.

As Notre Dame searches for a replacement for Nix next season, it will be interesting to see how Jones handles playing inside behind Nix as Nix will most likely not be at his full volume of work in his first week back after spending the last two weeks on the sidelines.  The Irish don’t have an obvious heir apparent to Nix thanks to having to burn a redshirt for Kona Schwenke in 2011 and the departure of Eddie Vanderdoes before he ever set foot on campus this past summer.  If Jones can handle the position and continue to add sine bulk in the off-season, Notre Dame could answer one of the biggest questions looming for this off-season sooner rather than later.

For now though, the most important thing for Notre Dame is that Big Old #1 will back on the field this weekend making things difficult for the Pitt offense and making things easier for the rest of the Irish defenders.