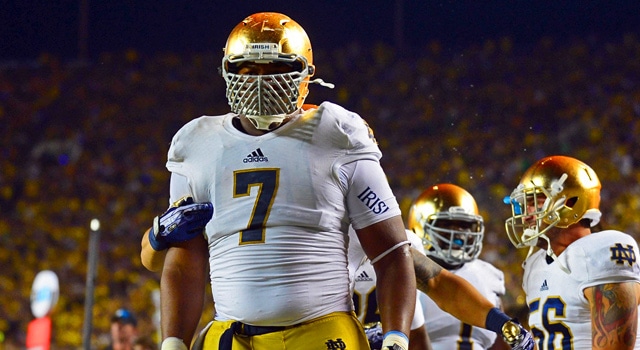 Notre Dame Fighting Irish defensive lineman Stephon Tuitt (7) celebrates with teammates after recovering a fumble in the end zone for a touchdown during the fourth quarter against the Michigan Wolverines at Michigan Stadium. Mandatory Credit: Andrew Weber-USA TODAY Sports

When Stephon Tuitt announced that he would forgo his senior season at Notre Dame in favor of entering the 2014 NFL Draft on Sunday, a giant hole was created on the 2014 Notre Dame defensive line.  A hole that Brian Kelly and his to be announced defensive coordinator will need to fill in order to get the Irish into the playoff race on the heels of a 9 win season.

Simply put, Notre Dame does not have an individual on the 2014 roster like Stephon Tuitt mainly because there are very few individuals that exist in the mold of Stephon Tuitt and even fewer that have worn a Notre Dame jersey.  That doesn’t mean, however, that Notre Dame can’t replace Tuitt on the line and still have a stout defensive line in 2014.

The first step in replacing Tuitt is to just get healthy up front.  Before the season Notre Dame lost both Tony Springmann and Chase Hounshell for the season.  Both players should be back for the 2014 season although Springmann likely won’t be able to participate in Spring ball as his recovery from an ACL injury has been slowed by an infection.  Hounshell though was practicing with the scout team during bowl preparations and will be back for the spring.

Will Hounshell, a one time four star recruit, finally stay healthy as he enters his senior season though?  Hounshell has missed the last two seasons with shoulder problems and hasn’t played a meaningful down since 2011.  In an ideal world, Notre Dame wouldn’t have to rely on Hounshell for much playing time next year given all of the time he’s missed, but with Tuitt and Nix both gone, it would be a huge boost for the Irish defensive line if Hounshell could stay healthy and start to play up to his recruiting pedigree.

Sheldon Day played in 11 for Notre Dame in 2013, but was slowed down for most of the season with a high ankle sprain that lingered and limited his effectiveness.  Much was expected of Day in 2013 but as the sophomore labored through the nagging injury he was limited to 33 tackles, 5.5 tackles for loss, and just a half a sack.  With a full off-season in the weight room, Day will be back to full strength and could be ready for the breakout season many envision he would have in 2013 next fall.

The one positive of all of the injuries that ravaged the defensive line this year was the playing time that both freshman Isaac Rochell and sophomore Jarron Jones received that they may not have tallied had injuries not forced them into the lineup.  Jones played extensively after Nix was shut down after the PItt game and after a slow start against the Panthers, Jones began to emerge over the final three games of the season.  Jones ended the season with 20 tackles, a sack, and two blocked kicks while starting one game.

With just Day, Jones, Rochell, and Hounshell coming back with any experience, Notre Dame could take a look at Ishaq Williams at defensive end permanently in 2013 after he played more of a hybrid role in 2013.  Williams played at a listed 261 lbs last season, but would likely need to spend some additional time with Paul Longo this off-season to pack on a few additional lbs to hold up to playing defensive end more extensively.   Williams too was hobbled by injuries in 2013 and missed two games completely.

The only freshmen defensive lineman to redshirt in 2013 was Jacob Matuska.  He will get a lot of playing time in the spring and might be called upon next season for some depth.   Matuska came in at a solid 275 lbs but needed a redshirt season in 2013 after many projected him to be a tight end out of high school.

Notre Dame is bringing in an impressive front seven class in the #GoldenArmy14, but it’s not clear if the Irish will receive much immediate impact up front.  Andrew Trumbetti figures to be the most likely to contribute early since he is set to enroll early this month and will have the benefit of an off-season with Longo.

Jay Hayes and Matt Dickerson might have the size to provide a few snaps, but it would be a shame to have to force either into action unless they show they are ready.   Both are listed in the 260 lbs range but would likely benefit from a redshirt season – especially Dickerson since he missed his entire senior season due to injury.   Jonnathan Bonner and Grant Blankenship are other potential ends in this year’s class, but both will also likely need time in the weight room before being ready for meaningful playing time.

Day, Rochell, Jones and Springman will give Notre Dame at least four very solid defensive lineman to rotate for the three starting spots in 2013, but for the Notre Dame defense to replace Stephon Tuitt, they will need a combination of Hounshell, Williams, Matuska, and Trumbetti to provide depth up front.

If the injury bug strikes Notre Dame along the defensive line again in 2014 though, things could get hairy for the Notre Dame defense in a hurry.  In 2013 Louis Nix Sheldon Day, and Sheldon Day combined to play just 23 snaps together.  If Notre Dame’s 2014 starting trio combines for that few combined snaps, Notre Dame is going to need to win some shootouts to be in the playoff mix.