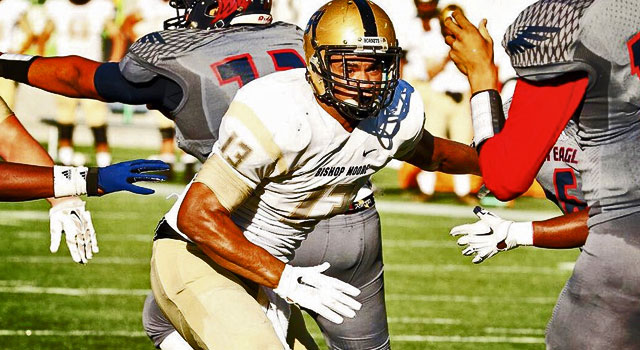 Notre Dame’s 2016 Irish Invasion started off with a bang on Friday when Florida strong side defensive end Jonathon MAcCollister committed to the Irish shortly after his arrival on campus for the yearly summer recruiting bonanza.

MacCollister held offers from more than 30 schools prior to his commitment to Notre Dame on Friday highlighted by offers from Ohio State, Michigan State, Clemson, Auburn, Oregon, and Miami.  Such an offer list suggests MacCollister’s potential might be greater than his current recruiting service rankings suggests.

Despite a list of elite suitors, MacCollister had been considered a strong Notre Dame lean since receiving an offer recently and it did not take long once he arrived on campus for him to pull the trigger on his commitment.  MacCollister told the Orlando Sentinel he just felt at home on campus.

“While I was walking around the campus I just felt home and I finally got to sit down and talk to the athletic director [Jack Swarbrick] and we really hit it off and while I was waiting to talk to Coach [Brian, head coach] Kelly I was talking with Coach [Keith, defensive line] Gilmore and really hit with me too.”

Also working in Notre Dame’s favor in the recruitment of Jonathon MacCollister was the presence of his high school teammate and current Notre Dame freshman offensive lineman Parker Boudreaux.  The pair won a state title together in 2015 and the frosh lineman did his best to recruit MacCollister.  In fact, Boudreaux and was the first person to welcome him to campus yesterday.

Currently listed at 6’4″ and between 230-240 lbs, MacCollister is still learning to play defensive end after playing as a 265 lbs offensive tackle upon arriving at Bishop Moore HS in Florida following a transfer from DeLand High School.  Since then MacCollister has slimmed down and has shown the type of versatility and athletic ability to be recruited as both a defensive end and tight end.  In fact, Ohio State offered MacCollister as a tight end.

Notre Dame, however, recruited MacCollister on defense and a potential future replacement at strong side defensive end where Isaac Rochell has been a mainstay for going on three seasons now.  In that regard, MacCollister is very much in the mold of 2016 early enrollee Khalid Kareem.