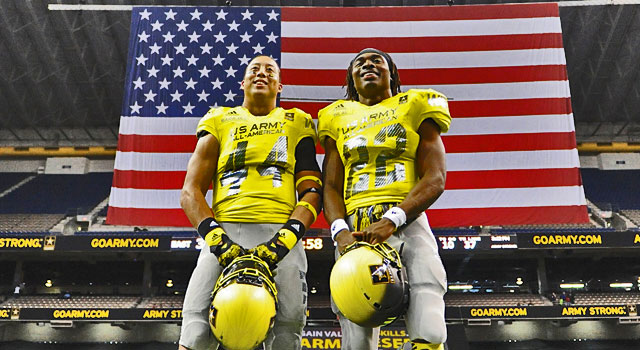 Historically, the state of Indiana has not been a hot bed of Division 1 talent which has always been a challenge for Notre Dame on the recruiting trail.  This year, however, the Hoosier State was the home of several highly touted recruits and Notre Dame’s dominance in it’s own backyard helped shaped the class that Notre Dame signed on Wednesday.

Notre Dame added four players from the state of Indiana to its roster today – linebacker Josh Barajas , safety Mykelti Williams, linebacker Asmar Bilal, and defensive lineman Brandon Tiassum.  According to Rivals.com, those four players were all in the top 6 prospects in the state with Barajas #2, Williams #3, Bilal #4, and Tiassum #6.

It might seem like a lot to get four prospects from your home state, but when you consider that Notre Dame had just six players from Indiana across all classes on the 2014 roster, you start to see that the state hasn’t been too kind to the Irish in terms of sending talented prospects to South Bend.

Justin Brent (Speedway, IN), Sheldon Day (Indianapolis, IN), Nick Martin (Indianapolis), Jaylon Smith (Fort Wayne, IN), Drue Tranquill (Fort Wayne, IN), and John Turner (Indianapolis) were those six players so you can see that when Notre Dame has gotten players from Indiana, they have produced.  Day, Smith, and Martin were all starters and will be back in 2015 – all possibly as captains.  Tranquill has a bright future after playing as a true freshman over several more highly touted players above him on the depth chart in 2014 and Justin Brent is considered a highly regarded young wide receiver.  Of the six, only Turner would be considered more of a role player at this point in his career.

The quartet of recruits who Notre Dame added today have the ability to add to that group.  Barajas and Bilal are part of a linebacking trio along with Tevon Coney that is one of the strongest position groups in the entire class.  All three of them have the ability to be multiple year starters for the Irish before all is said and done and all could be playing as early as this fall. Barajas could potentially play all three linebacker positions on the college level but has the locks of a dynamite SAM linebacker right now.  Bilal on the other hand has the athleticism of a safety which should serve him well as a WILL linebacker for the Irish.  Both backers were US Army All-Americans and drew rave reviews throughout the week in San Antonio because of how athletic they are.

Mykelti Williams was a late addition to the class but with the loss of Prentice McKinney and Notre Dame’s misses of Arrington Farrar and Nathan Meadors on Signing Day, he is the most highly rated safety in this year’s class.  We also ranked him as one of the hidden gems in this year’s class since not every recruiting service was as high on Williams as Rivals.

Brandon Tiassum has the ability to develop into a quality starting defensive lineman for Notre Dame as well if he continues to develop and puts in the time he needs to in the weight room.

Notre Dame does not benefit from being located in a talent rich state like Texas or Florida or California so when elite players are available in their own backyard, they absolutely have to land them.  Brian Kelly and his staff have done just that over the years by hauling in the likes of Day, Smith, and Brent – all of whom were very highly touted prospects.  They did it again this year as well.  Barajas was committed to Penn State at one point and Michigan offered stiff competition for Bilal.  Ohio State was in the mix for both as well and was reportedly making a late run at Williams before they were told thanks but no thanks.

Having this many highly ranked recruits come out of Indiana certainly won’t happen every year, but when it does, it is imperative that Notre Dame owns it’s own backyard and doesn’t let the likes of Michigan, Ohio State, or other Midwest programs to lure in-state talent away.  They protected the backyard this year and as a result, Notre Dame ended up with a pair of 4-star linebackers, a potential playmaking safety, and a defensive tackle that could develop into a fine player.

Now, can the state of Indiana please produce a pair of linebackers like Bilal and Barajas every year?