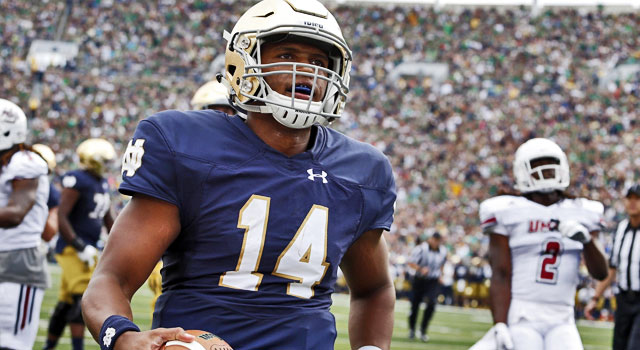 There’s a reason Notre Dame is a touchdown underdog to Ohio State in this year’s Fiesta Bowl matchup on New Year’s Day, and it has everything to do with the Buckeyes winning 25 of their last 27 contests. However, it’s important to remember Notre Dame was also a touchdown underdog to LSU in last year’s Music City Bowl, and the keys to defeating the Tigers, as UHND outlined leading up to kickoff, involved committing to the running game to keep LSU’s talented running back, Leonard Fournette, off the field. The plan worked, and Notre Dame was able to keep pace with LSU’s potent rushing attack, managing a time of possession of 36:39 minutes compared to LSU’s 22:41.

Faced with underdog status in yet another bowl game, what are the keys for a Notre Dame victory on January 1st?

If Notre Dame is going to upset Ohio State the Irish offense will need to score a lot of points, and that starts in the trenches. The offensive line battled through injury for most of November, an issue solidly in the spotlight after the poor showing against Boston College. Notre Dame mustered only 123 rushing yards on 33 attempts against the Eagles, an average of only 3.3 yards per carry.

Fortunately the offensive line appeared to be returning to its early form when Notre Dame ran wild on the Stanford Cardinal. True freshman Josh Adams piled up 168 yards – at an astounding 9.3 yards per carry – and quarterback DeShone Kizer chipped in another 128 yards with his feet.

A similar level of production against the Buckeyes will go a long way toward securing a Notre Dame victory.

Winning the time of possession battle was the most critical component of Notre Dame’s upset victory against LSU, and controlling the clock has to be one of the top priorities against Ohio State. The Buckeyes have made a living pounding their opponents into submission this season with star running back Ezekiel Elliott rushing for over 1,600 yards and 19 touchdowns, and quarterback J.T. Barrett rushing for another 500 yards and 11 touchdowns. Keeping the Ohio State offense off the field should be one of the top priorities for Notre Dame head coach Brian Kelly.

Notre Dame’s ability to control time of possession has taken a fortuitous upswing in recent days with the suspension of starting defensive tackle Adolphus Washington following a solicitation citation and the foot injury to fellow defensive tackle Tommy Schutt, whose status for the Fiesta Bowl remains unclear. A healthy Irish offensive line against an increasingly depleted Ohio State interior line could play a critical role in Notre Dame landing an upset victory.

Defenses have to pick and choose their battles, and in the case of Ohio State, it’s a no-brainer. Defensive coordinator Brian VanGorder needs to sell out on stopping Ohio State’s potent rushing attack. Ezekiel Elliot and J.T. Barrett are both averaging over 6 yards per rushing attempt, and the Buckeye offense had a coming out party against bitter rival Michigan, embarrassing the Wolverines 42-13. Ohio State cut through Michigan’s defense to the tune of 482 yards of total offense, with Elliot rushing for 214 yards and Barrett piling on another 139 of his own. The duo combined for 5 touchdowns on the ground.

With Urban Meyer’s team displaying flashes of the unit that tore through last year’s College Football Playoff, it’s imperative that Notre Dame devote all of its resources to forcing the Buckeyes into an aerial attack.

Notre Dame did a superb job of bottling up Stanford’s Heisman finalist, running back Christian McCaffrey, in Notre Dame’s 38-36 season finale loss in Palo Alto, but there is a misconception amongst Irish fans that the big chunk plays surrendered against Stanford were due to VanGorder’s defense selling out to stop the run. That is simply not the case. Notre Dame’s secondary gave up big chunk plays to Stanford in obvious passing situations, such as Devon Cajuste’s 42-yard touchdown reception on third and long when safety Elijah Shumate was confused as to who he should be covering while playing in man coverage.

The Irish defense has proven it can contain elite rushing attacks but it has shown zero improvement in coverage. If Kelly’s squad has any chance to win in Arizona the defense must prevent big plays in obvious passing situations, which was Notre Dame’s ultimate downfall against Stanford.

1. Score touchdowns in the red zone

A reoccurring issue for Brian Kelly’s offense since his arrival in South Bend five years ago is its inability to score touchdowns once inside the red zone. Notre Dame boasts some of the worst red zone production in the nation and is tied for No. 89 overall. Failing to score inside the 20 yard line derailed Notre Dame against Stanford, and if not significantly improved, will cost Notre Dame once again. The Buckeye’s defense ranks No. 2 nationally in scoring defense and No. 6 in red zone defense, and anything less than a perfect red zone performance will see Notre Dame losing yet another major bowl game.

Overall, Notre Dame’s status as an underdog is justified. But the elements to pull off an upset against Ohio State are there, just as they were present last year against LSU. Now the task is for Brian Kelly to make sure his players execute.

Scott Janssen is a blogger for the Huffington Post and has authored several nationally-featured articles, including an appearance on MSNBC as a sports contributor. He talks football 24 hours a day, much to the chagrin of his wife and those around him. Scott can be reached at scottjanssenhp@gmail.com or follow him on twitter.