We will rate the GAMES in perceived degree of difficulty. This is based on quality of the opponent, where we play them and when we play them. This is not an attempt to rank the TEAMS on a preseason basis or where they’d be expected to rank at season’s end.

Think back to the Arizona State game of 2014. A normally dour crowd jacked up to a frenzy for the first visit by the Irish in a long time. Except this is not a normally dour crowd. This will be a BIG GAME for the CLEMSON faithful. They see FSU and South Carolina and Georgia Tech every other year, but this is NOTRE DAME. Watch the ticket prices climb on Stubhub. The Irish last visited Death Valley in 1977, and men and women of a certain age will remember the hostile crowd and some highly unusual penalty calls. On one drive the Irish had to amass 120 yards because of rabid zebras. Clemson, often obscured by the long shadow cast by Florida State has achieved a new plateau in the last three seasons. They are 32-7, with bowl wins over LSU, Ohio State and Oklahoma. Of the seven losses, three were to Florida State, two to South Carolina, and one each to Georgia and Georgi a Tech.

Clemson did lose a lot of their defensive talent, and Deshaun Watson, the designated heir apparent to the prolific Tajh Boyd, struggled with injuries during his freshman year. You may not have this game circled on your calendar, but rest assured that Clemson does. Clemson has thrown one other log on the bonfire. They play Louisville on Sept. 17th, a Thursday night. They do not play again until the Irish come to town some 16 days later. Crouching Tiger, indeed.

This will be a very big game, with an opportunity to wipe away the bad taste of last November. The Trojans have a lot of offensive ordnance, with one of college football’s most explosive receiving corps, age notwithstanding. Cody Kessler had a glistening 39/5 TD/Int ratio, especially appreciated in these parts. While Agholor departs for the draft, George Farmer may finally be getting healthy, but even if he’s not, Juju Smith is the next great Trojan receiver. Sarkisian is adding a couple of tall JCS to this class, so he is trying to make the rubble bounce at wide receiver. Troy has a huge offensive line with Zach Banner, 6’9” 350, Damien Mama 6’5” 370 and Viane Talamaivo 6’3 330.   But this time it is expected that they will get a closer look at Jarron Jones and Sheldon Day, who did not play in the Coliseum.

The Trojans, however, are vulnerable on defense. This is just not yet a Pete Carroll quality defense.

Certainly, Su’A Cravens and wunderkind Adoree Jackson are two of the best defensive backs in college football regardless of class. Biggie Marshall may be the next Trojan frosh phenom at Cornerback. But the Trojan front seven is something less than imposing. It will be another year (2016) before Troy fields an outstanding defense, at least in the front seven. Freshmen like John Houston, Porter Gustin, Jacob Daniel, Osa Masina and Rasheem Green will still be freshmen when the game is played.

Third Saturday in October. USC. Revenge on the mind. On a rainy Saturday, October 23, 1965, fifty Autumns ago, Ara’s Irish got their revenge for the 1964 national championship robbing loss to USC by pounding USC 28-7 as Larry Conjar muscled in four touchdowns. It will be interesting.

A Brian Kelly coached Notre Dame team has not defeated Stanford at Stanford Stadium. Stanford returns a veteran Kevn Hogan at quarterback. Late in the year, against Cal, UCLA and Maryland in the bowl game, Hogan seemed to shed his proclivity toward turnovers and played flawlessly. In those last three games, Hogan completed 45 passes in 59 attempts for 637 yards, with four touchdown passes against one interception. Hogan added 21 carries for 142 net rushing yards. He may be poised for a breakout Senior season. Stanford did lose a lot of the standbys in its defensive front seven and may not be as formidable a defense as in the past. The biggest unknown in this game is which team will have been impacted the most significantly by the inevitable injuries that occur during a college season. This game could be the feature game of Thanksgiving Weekend, or a complete yawn, of interest only to partisans of both schools.

Georgia Tech had a breakout season in 2014, escaping a 7-6/8-5 rut. They won three of their last four games, beating Clemson by 22, Georgia by six and Mississippi State by 15, the only loss by 2 to Florida State in the ACC Championship game. The Rambling Wreck lost their 2d, 3rd, 4th and 5th leading rushers, but return the fleet Justin Thomas, as fast a quarterback as the Irish have faced in recent years, perhaps ever. Further, you just know that Paul Johnson will have some runners ready to accept Thomas’ pitches and handoffs.

The dark side of the Yellow Jackets moon is that they are not imposing defensively. In the last three games, against sound offenses like Georgia, Florida State and Mississippi State , Georgia Tech allowed over 30 points per game.

This is a tricky scheduling spot for the Irish, right after the road trip to Charlottesville. This could be an uncomfortable Saturday, a Navy style nail biter, waiting for the Irish to outscore the Engineers.

Georgia Tech’s last visit to Notre Dame Stadium was for the 2007 opener. Ol’ Schematic Advantage sculpted his “David” of an (ahem) advantage, composing an “Eroica” of a game plan which relied on Demetrius Jones being the piñata for the Engineer defense. Tech won 33-3 under the crafty leadership of Chan Gailey. It was not a pretty sight. The Irish used that game as a springboard to a 3-9 season, including home losses on successive Saturdays to Navy and Air Force. Amortizing the bloated head coach’s bloated salaries, at least the losses were cheaper than the wins.

Charley Strong is building something special in Austin, after ending the Country Club that Mack Brown enabled. A lot of players would not accept Strong’s discipline and left on their own, joining the ones that Strong dismissed directly. It was so cathartic, so cleansing, that Roger Goodell sought Strong’s counsel in how to establish, for the lack of a better phrase, an “RKG” culture.

Strong reversed the recruiting momentum which Kevin Sumlin’s Aggies had established in the Lone Star State. Strong started 6-7 but is just beginning to build his program and restore Longhorn glory.

He will bring a solid defense to South Bend, but his offense is still under construction.

Notre Dame catches Texas early in Strong’s upward arc, and the Irish will have a significant experience and offensive skill edge. But the last time a former ND assistant came in for an opener with an “inferior” team, Skip Holtz’ USF Bulls embarrassed and upset the Irish in the 2011 opener.

The good news is that this is a favorable schedule spot for the Irish, coming between a trip to Lincoln Financial to play Temple and a home game against Wake Forest. The further good news is that, once again, Pitt has a new coach, the all too familiar Pat Narduzzi, fresh in from East Lansing. This is Kelly’s fifth meeting against Pitt, and the fourth different Pitt head coach he will have faced, following Wannstedt, Todd Graham and Paul Chryst. The Irish seldom have an easy go of it in Pittsburgh. Narduzzi, in his year of acclimation to the ACC, might rise to the occasion against a very familiar foe.

The Irish play in another former professional football venue, the home of the Boston Patriots of Butch Songin and Gino Cappelletti. While the map says Boston, this is a Shamrock Series game and the Irish should own the crowd, at least the sober portion. Steve Addazio is another former Notre Dame assistant and has compiled a14-12 record in 2 seasons in Chestnut Hill, including last year’s rout of USC, 37-31 when his Eagles racked up over 400 yards rushing against the Trojans.

Addazio loses the straw that stirred the Eagles’ offensive drink, quarterback Tyler Murphy. While Addazio prefers to “ground and pound” it will be difficult without any semblance of a passing threat. The Irish play BC the week before the trip to Palo Alto. Neither team’s performance will be as bad as the spectators’ sight lines. Folks will be reminded why they stopped playing football in Fenway. But those devious Eagles have sneaked an open date in the Saturday before the Irish invade the Fens and Fenway.

Mike London is a dead man walking. London is a mind-boggling 23-38 but somehow was granted a fifth year. Carrying coals to Newcastle UVA finished 9th in Rivals recruiting rankings for 2015 in the ACC.   But the Wahoos play a little defense and return 8 defensive starters, so they will not go quietly on their campus. Nevertheless, with the Irish having Pitt, BC, Wake and UVA on the schedule, the ACC rotation is very kind to the Irish in 2015.

What a perfect spot! Right between a visit to Clemson and a home game against USC. Keenan Reynolds returns, older and wiser. Prepare to be aggravated and frustrated when the Irish are on defense, delighted when they are on offense. Kelly’s Irish have averaged 45.6 ppg against the Middies in five contests. Enjoy the game, ignore the post-game injury report.

Matt Rhule, along with Justin Fuente and Jeff Brohm, should be one of the coaches moving on up after the 2015 season if he continues his progress with the Owls.   Rhule improved his team from 2-10 to 6-6, featuring wins over SEC foe Vanderbilt and prolific East Carolina. Temple returns its quarterback, P.J. Walker, along with 8 other offensive starters and all 11 defensive starters. This is the first game for the Irish after an open Saturday on October 24th.

Not at the bottom only because of the presence of UMASS. Wake is in a tough spot in the ACC, and even alum Jim Grobe, one tough cookie, could not make a go of it.

Dave Clawson put up a 3-9 in his first year in sylvan Winston-Salem and claimed he had Wake’s greatest recruiting class ever, though it finished 11th in the ACC recruiting ranking on Rivals.   On its last visit to South Bend lost a 38-0 rout to the Irish. In this instance past performance just might be an indication of a future result. The only complicating factor this time is that it is Senior Day.

UMASS has produced legendary athletes like Julius Erving and Marcus Camby. Neither played football. Mark Whipple put up a 3-9 last year, earning victories over Kent State, Eastern Michigan and Ball State. This should not be a challenge.

2015’s schedule is odd. It does not have the overhanging doomy, gloomy presence that Michigan and FSU offered going into 2014. But there is a potentially uncomfortable stretch from 10/3 to 10/17 when the Irish play At Clemson, Navy and USC. It is not any one opponent that is overwhelming, but the sequencing of the three that is nettlesome. The answer? Just win!

The counterpoint is the last five games are as undaunting a stretch as the irish have played in recent years. But know this: if the nincompoops in the media and the nattering nabobs of the internet are screaming bloody murder about a soft November schedule for the Fighting Irish (Temple, Pitt, Wake, BC, before the Stanford finale) it will simply be a clear indicator that the Irish came out of the first seven games with a solid, contending record. We want a

Is Jerian Grant the Best Dunker in College Basketball? 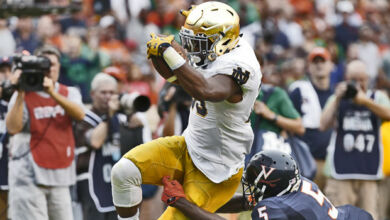 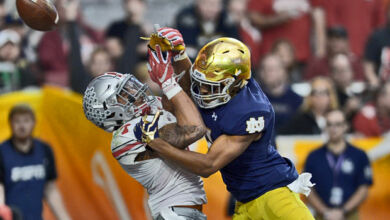 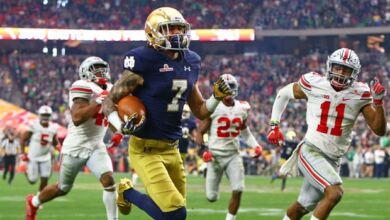