Unique – adj. being the only one of its kind; unlike anything else.  It is an absolute, binary term. Something is either “unique” or it is not. There is no “somewhat unique.”

The social media has accelerated the reduction to an electronic Tower of Babel-level absurdity of freedom of speech, and has completed the devaluation of our linguistic currency. But we are about to venture back, when talk was less cheap, to the gold standard of “unique” and “gifted.’  If you prefer optics to linguistics, then be sure your “unique” lens is sharp and clear and that your “gifted” lens is focused; otherwise you will misperceive the subject with a foggy blur, as if watching a 3-D movie without the requisite glasses. George Gipp was different in every way. Unique, Gifted.

Gipp was born in 1895 in Laurium, MI, way up there on the Upper Peninsula of Michigan. George Gipp was the son of a preacher man, Baptist pastor Matthew Gipp. He had 7 brothers and sisters.

He was like Catcher in the Rye’s Holden Caulfield as a teenager, rebelling at the strict Baptist values of his father and mother Isabella. J.D. Salinger made Caulfield tall at 6’2 not unlike Gipp’s 6’1, both gangly, alienated loners. Gipp had become a taxi driver, a pool hustler, a gambler and a womanizer even while he was in Laurium.

But if it involved a ball, he could play the game. He was a great athlete in high school, and while he played football, he had more compelling success in baseball and basketball. One year he led Calumet High School to a 24-1 basketball record and batted .494 for the baseball team. Gipp completed every play to the echo of the whistle, but never graduated from High School.

Still “finding himself” at the age of 21, he took the advice of Notre Dame baseball player Wilbur “Dolly” Gray and chose to venture to South Bend to play baseball for Notre Dame.

Jess Harper was the head coach at Notre Dame in 1916, with his lead assistant Knute Kenneth Rockne. Rockne was clearly the heir apparent, and was already taking control as the lord and master of the realm.

Rock got one look at Gipp, dropkicking a football some 65 yards while Gipp was practicing baseball. Rock treated other ND sports as if he were a medieval lord with “jus primae noctis” and Gipp immediately became part of the Notre Dame football team.

He was a natural athlete. And he possessed the three most important qualities needed to attain greatness: the qualities of body, mind and spirit. He had what no coach or system can teach-football intuition.
— Knute Rockne, Notre Dame coach (1918-1930) as referenced in “The Official Website of George Gipp” from CGM Enterprises

Gipp played with the freshman team in ’16, played professional baseball in the summer of ’17 and was ready to go on the Notre Dame varsity in ’17.

Jess Harper played Gipp immediately. Gipp had 63 carries for 244 yards and three completions in eight attempts for the 6-1-1 Irish. Gipp broke his leg in the third game of the year and thus avoided induction into the Army during World War I.

Harper had retired and Knute Rockne stepped up from heir apparent to Notre Dame Head Football Coach-for life, as it turned out.  Rockne unleashed his prize pupil Gipp as his key weapon. Gipp rushed for 541 yards, passed for 293 and scored 43 points for the 3-1-2 Irish. The loss was on November 16, 1918, in East Lansing, a 13-7 win by Michigan State. It was the last football game Gipp would ever lose.

“I felt the thrill that comes to every coach when he knows it is his fate and his responsibility to handle unusual greatness, the perfect performer who comes rarely more than once in a generation.”
— Knute Rockne as referenced in “The Official Website of George Gipp” from CGM Enterprises

Gipp played both ways, and though we do not have film to review, writers and players of the day claim that he NEVER had a pass completed against him.

“His kicking and ball carrying was about as fine as anything I have ever seen on a football field.”
— sports writer Grantland Rice as referenced in “The Official Website of George Gipp” from CGM Enterprises

In 1920, school president Father Burns expelled Gipp for cutting too many classes. Other football powers sought Gipp’s services, and, “The Horror” Michigan sought him for its baseball team and football team.  Father Burns, knuckled under pressure from Notre Dame boosters allowed Gipp back in, subject to Gipp passing a written exam.  The prodigal Gipp waited on tables in Brownson Hall, but found tuition supplementation easier by hustling pool in downtown South Bend, and then expanding his portfolio by traveling to Elkhart to play poker or pool with pay envelope enriched railroad and factory workers. “If you are in the game for 20 minutes and you don’t know who the patsy is, they you are the patsy.” (Warren Buffet)

Well, Gipp always knew who the patsy was and it wasn’t ever George Gipp!  This all occurred smack dab in the middle of his college career.

Gipp was at his performing best in his senior season. He ran for 827 yards, a mind-boggling 8.1 yards per carry, a record that still stands in this new Millennium.  He passed for 709 yards and scored 64 points, once again outscoring all 9 of Notre Dame’s opponents.  His career rushing record stood for 58 years, until broken by Jerome Heavens. His total offense per play and per game record stood for 40 years.  But the year was not without drama.

Hunk Anderson played for three years with Gipp, coached Notre Dame in the three years after Rockne’s death in 1931, and won a harbinger of the Super Bowl by coaching the Chicago Bears to the 1943 NFL championship. He knew, about football, a thing or two because he’d seen a thing or two.

He was born 60 years too soon. Had he been playing today, George Gipp would be called the greatest football player of all time. I know, I’ve seen them all.
Not only could Gipp do anything he wanted on the football field, he also was like a playing coach. He was a few years older than the rest of us and we looked to him for leadership.
Many a time he would make up a play during a timeout on the field. He knew the opposition keyed on him, so he would switch and become a decoy.
— Heartley “Hunk” Anderson” from an interview by Bob Curley, Orlando Sentinel Star, December, 1978, as republished in Irish legends.

We on the campus look upon George Gipp as the greatest football player ever turned out at Notre Dame, one whose ability has been surpassed if at all by few cleated warriors since the game was introduced in this country.
— Elmer Layden, Four Horseman backfield and Notre Dame coach (1934-1940) as referenced in “The Official Website of George Gipp” from CGM Enterprises

WHAT HAPPENED ON GIPP’S DEATHBED?

It is documented that he converted to Catholicism in his final hours. He had been less that an altar boy even back in Laurium, but repented and converted. Amazing Grace, influenced by convert Rockne, “saved a wretch like me.”  Otherwise we have the testimony of Knute Rockne, a secret he kept in his heart for 8 years.

In the course of human events, we highly value funereal oratory. On occasion, the elegant legacy of the departed is best captured more by what survivors do than by what they say.

Rockne may have reached the height of eloquence in eulogy by what he did in those early months of 1921.

The Winter and Spring after Gipp’s departure were a challenge for Rockne, having lost both the heart and soul of his first two unbeaten teams, as well as his erstwhile assistant coach. So Rockne, being Knute, went and glutted his sorrow on a morning rose of recruiting, corraling Harry Stuhldreher, Sleepy Jim Crowley, Don Miller and Elmer Layden. They would become Notre Dame’s Four Horsemen.

4-2 Notre Dame was playing unbeaten Army in Yankee Stadium. While the score was 0-0 at halftime, powerful, unbeaten Army seemed to be seizing momentum. The “breaks were beating the boys; the lads were up against it.”

Rockne knew that the apparition at Fatima occurred in 1917, just before Gipps’s appearance in a Notre Dame varsity uniform for the first time in the Fall of 1917. Rockne was aware that part of the lure of Fatima was that Lucia Santos did not reveal the third secret immediately: it was to be unsealed in 1960. The delay increased the impact of the revelation. It had been nearly 8 years since Gipp lay on his deathbed, rendering a final request to Rock.

The Notre Dame players filed into the locker room of Yankee Stadium and Rockne invented the halftime speech with such gusto, magic and elan that all subsequent halftime oratory has paled by comparison, a vile knockoff, full of sound and fury, signifying nothing.

“Well, boys … I haven’t a thing to say.  Played a great game…all of you. Great game.  I guess we just can’t expect to win ‘em all.   I’m going to tell you something I’ve kept to myself for years — None of you ever knew George Gipp.  It was long before your time.  But you know what a tradition he is at Notre Dame.  And the last thing he said to me — “Rock,” he said – “sometime, when the team is up against it — and the breaks are beating the boys — tell them to go out there with all they got and win just one for the Gipper.” “I don’t know where I’ll be then, Rock”, he said – “but I’ll know about it – and I’ll be happy.”

The Fighting Irish came roaring out of the tunnel to the field and Jack Chevigny scored a third quarter touchdown. As Chevigny flipped the ball to the referee he told his teammates “That one’s for the Gipper!”

Later, seldom used sub Johnny O’Brien came onto the field with the clock nearing the end of the fourth quarter. O’Brien was a track star, a mere sub on the football team, but with three minutes left Johnny Niemic hit Johnny O’Brien with a 20 yard pass for a TD and the final was 12-6. He became Johnny “One Play” O’Brien and Rockne’s Irish had indeed won one for the Gipper.

Buried in the records of College Football Hall of Fame is perhaps the most famous induction, ever, of a player.

George Gipp, from Laurium to South Bend, to the DNA of all true sons and daughters of Notre Dame. Nearly a century later, the legend lives on from the Chippewa on down. 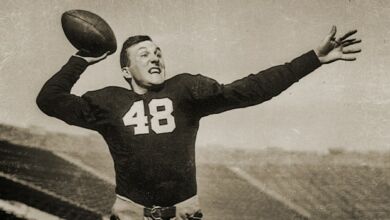