Get ready for today’s Notre Dame game with this week’s Gameday FAQ!

Notre Dame is Syracuse at Met Life Stadium.  Notre Dame last played Syracuse two years winning 31-15.  That Notre Dame team, however, was ranked #8 in the country and brought in an undefeated record with them.  This one limps in at 1-3 with possibly their bowl hopes on the line today.

For more background on Syracuse, we caught up with the ‘Cuse blog Tory Nunes is an Absolute Magician for some insight on the Orange.

Deshone Kizer will once again start at quarterback for the Fighting Irish today although Brian Kelly called his play last wee unacceptable.  Kizer’s starting job does not appear to be on the line but Kelly was not shy about mentioning that Malik Zaire is a great quarterback as well and is just waiting for his chance.

The Irish and Orange will play in the home of the New York football Giants – Met Life Stadium.  Notre Dame last played there in that 2014 game against Syracuse and have played there just one other time – an embarrassing 35-17 loss to Navy in Brian Kelly’s first season at Notre Dame.

Prior to Met Life opening, the home of the Giants – Giants Stadium or the original Meadowlands, was much kinder on Notre Dame.  The Irish held an 11-0 record there with the most recent contest a 27-9 victory over Navy in 2004.   The first game ever coached by Tyrone Willingham at Notre Dame occurred at the Meadowlands as well.

A rare early kick-off for Notre Dame today with a 12:00 PM ET/9:00 AM PT start time.  The start time of this game was only announced last week and almost certainly would not have been so early had the Irish not gotten off to such a terrible start this season.

Today’s game will be broadcast on ESPN nationally.

Yes, the game is available on the Watch ESPN APP and at www.watchespn.com.

There is a chance for rain throughout the day in the New York/New Jersey area this morning and afternoon.  At a minimum, there will be cloudy skies all throughout the game along with a chance of showers. 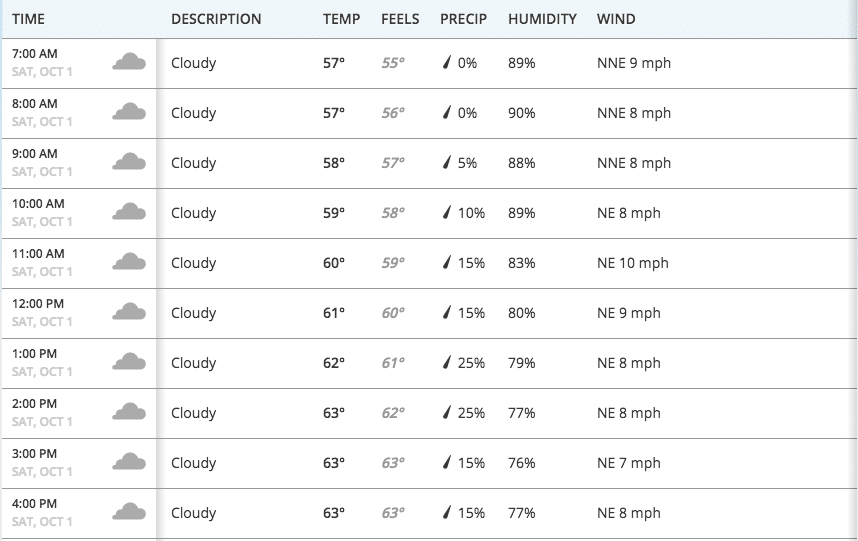 Notre Dame has been a double digit favorite throughout the week despite their 1-3 record.  The line did dip under 10 at one point this week but bounced back to 10 this morning.