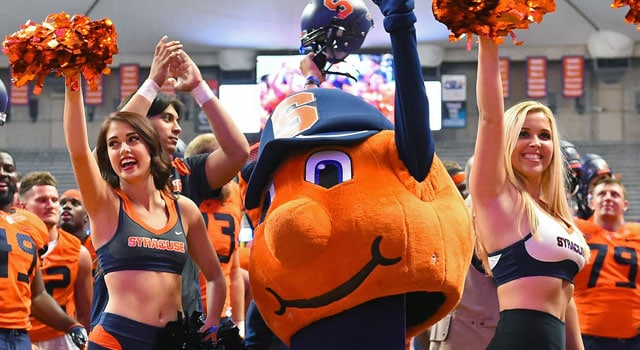 We caught up with John Cassilo of the Syracuse blog Troy Nunes is An Absolute Magician (@NunesMagician) to preview this weekend’s Notre Dame and Syracuse game at Met-Life Stadium outside of New York City. We traded questions with John to give Notre Dame fans a little more info on the Orange and their record breaking wide receiver Amba Etta-Tawo.

1. Where in the heck did Amba Etta-Tawo come from after never having more than 500 yards in an entire season at Maryland? And how, if at all, can he be slowed down.

We expected Etta-Tawo to come in and fill a vacancy when it came to Syracuse having a legitimate deep threat. He fit the mold of what Dino Babers said he was looking for in a wideout, and his extensive skill set does seem to be a natural fit for the system.

That said, we didn’t expect what we’re seeing this year. He’s a threat in any part of the field, is quick, big and physical and can make adjustments on the fly. He’s dominated every defender he’s gone up against, including all-conference corner Jamar Summers last week. If you try to jam him close to the line, he’ll likely blow by you. If you give him a short cushion, he’ll end up with a screen pass and a run after the catch. Summers played him with a 10-yard cushion for a good portion of Saturday and Etta-Tawo either ran right past him anyway, or out-muscled him for the ball once both were downfield.

Despite the numbers, Notre Dame has a more talented secondary than every SU opponent so far but Louisville. They’ll be able to keep up a bit better than UConn, but may need to double Etta-Tawo. That’ll open up opportunities for other receivers — which may or may not be good for the Irish.

2. A lot has changed at both programs in the two years since they last met at Met Life – what are the biggest differences for the Orange since then.

I mean, there’s the really obvious one in Babers. His arrival is a huge departure from what we know, and that’s awesome as a fan to see. The previous regime was built on defense and some older ideologies around the game, and some outdated thoughts on Syracuse’s ability to compete. Babers has brought in an exciting brand of offense, which leads to entertaining football, even in a loss. He’s an experienced head coach (Scott Shafer was not), and that allows us to see the plan much clearer from him and the rest of his staff. We know the rebuild is going to take time. But we can see the road laid out ahead. It’s going to be fun.

3. Will Fuller is no longer at Notre Dame, but the Irish have a lot of young and talented wide receivers – do you think the Irish will be able to attack the Syracuse secondary?

This isn’t to knock Notre Dame’s receivers, but I think any team can attack the Syracuse secondary. On top of being ravaged by injuries (two starters out for the season, plus several others sidelined), we have minimal depth, a lot of youth and we’re adjusting on the fly to a new scheme. The old staff recruited to a blitz-heavy, big-play focused defensive scheme. Babers runs a Tampa-2 that’s very coverage-heavy. Those concepts don’t really match, so the personnel we have has struggled to fit the scheme so far. Equanimeous St. Brown, C.J. Sanders and Torii Hunter Jr. will have plenty of chances to pad the stat sheet vs. the Orange.

4. Notre Dame has just one sack on the entire season. Is there any weakness in the Syracuse offensive line the Irish can attempt to exploit?

Syracuse was replacing three of five starters heading into the season, and then we lost three starters to injury prior to last week’s game. No telling how long they’re out for. But in any case, our O-line is young and inexperienced, and that’s caused some problems against quicker teams that can generate some pressure. UConn’s pass-rush isn’t much to brag about, but they were able to get behind the line of scrimmage a few times when they really dedicated to the blitz. This offense is built on quick releases in the passing game, but that hasn’t stopped opponents from creating a quality pursuit anyway.

5. How has the Syracuse defense held up in the second half of games this season with the uptempo offense running so many plays?

Surprisingly, the SU defense has looked better later in the game than they do early. Granted, still not an awesome unit overall (111th in total defense, 106th in scoring defense), but that comes with the territory of running at this tempo. The defense has issues related to a scheme mismatch, plus injuries and a lack of depth on the line and in the secondary. All of these things should add up to struggles, and they have. You’ve seen some real exhaustion from Orange defenders against teams that also run their offense at a similar clip (USF, Louisville). But last week against a slower team like UConn, they actually seemed to improve as the game wore on, getting a big goal line stop to keep the lead for SU.

Notre Dame clearly has talent and speed on their offense, so SU might look a bit overwhelmed by the time the fourth quarter rolls around in this one.

6. Aside from Amba Etta-Tawo, who else must the beleaguered Notre Dame defense shut down this weekend if they want to win?

Quarterback Eric Dungey (assuming Tuesday night’s undisclosed injury is nothing to be concerned about). He’s improved greatly this season and is protecting himself better with the ball in his hands. He’s not an amazing passer, but has found ways to make big plays, improve his downfield throwing and become more accurate than he was previously. Flushing him out of the pocket is a double-edged sword, because he actually throws well on the run, and has some speed around the edge. But he also wears down the more he’s hit. UConn didn’t get to him as much as other teams, and as a result, he threw for a career-high 407 yards.

Both defenses are bad, and despite the tempo Syracuse plays at, Notre Dame definitely has more talent on the offensive side of the ball. That talent, and the defensive playing with a bit of a chip on their shoulder this week, should be enough to grab the win. It won’t be easy for the Irish, and we’re bound to see a pretty high scoring game. But I’m not optimistic enough about the Orange to predict a win given all of their injuries. Give me a closer game into the third before ND pulls away for good. Notre Dame 52, Syracuse 41