Delay ‘Save Our Season’ Distress Calls 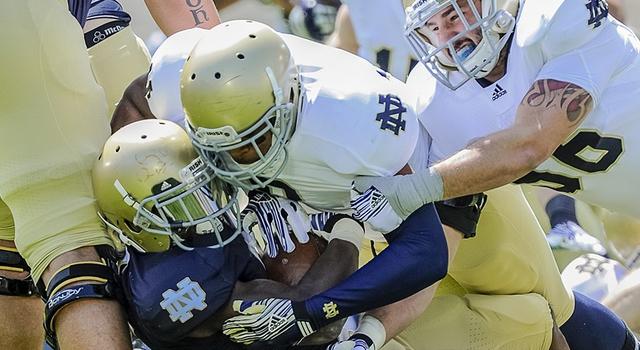 When it was announced Notre Dame’s starting cornerback Lo Wood ruptured his Achilles and was lost for the season, the first word that came to mind was “devastating”, which is a much cleaner word than I may have actually used (sorry, Mom). Being forced to seek out a replacement amongst a bevy of players with essentially no game experience is far from ideal. Almost equally as surprising as hearing of Wood’s injury was the reaction from many ND fans.  The most prevalent theme was the Irish season had now arguably ended before it even began. While I don’t deny a redshirt freshman quarterback with no experience facing the number one ranked schedule in the country – coupled with a green secondary that just became significantly greener – is definitely cause for concern, there are plenty of things to keep your eye on as an Irish fan in 2012.

Kelly Finally Has His QB Mold

Dual-threat Everett Golson was recently tabbed as Notre Dame’s starting quarterback this fall, meaning in year three Brian Kelly will finally possess a quarterback athletically capable of running his offense. The Kelly QB mold involves a signal caller who has the ability to run but will only do so when every possible passing target is no longer viable. The best instance of Kelly’s prototype to date has been Central Michigan star Dan LeFevour, or the “Wee Tebow”.

LeFevour was a Rivals 2-star with offers from the likes of Eastern Illinois and Ball State. In his first season LeFevour racked up a 63.7% completion rate with 3,031 yards and 26 TDs (not to mention his 521 yards and 7 TDs on the ground). By career’s end, LeFevour had set the NCAA record for most touchdowns with 150, besting quarterbacks such as Matt Leinart, Phillip Rivers and Notre Dame’s own former Heisman candidate, Brady Quinn.

While Golson is unlikely to match LeFevour’s numbers right out of the gate due to the Irish’s brutal schedule, watching Kelly finally get his “guy” at the QB position will make it worth tuning in.

I’ll admit it. When I first heard Brian Kelly hired former Tennessee Vols offensive line coach Harry Hiestand, I donned my armchair analyzer cape (there’s nothing wrong with a man in his twenties wearing a cape his mother made him while reading the news, by the way) and literally scoffed aloud. Hiestand had almost no experience with lines protecting mobile quarterbacks and his background was in pro-style offenses, not the spread. Well, I’m man enough to admit I had to fold the cape up and put it back in the closet.

Hiestand shut critics like me up by hauling in arguably the best offensive line recruiting class in the country within a few months of his arrival, and word coming out of ND camp is Hiestand has brought physicality to the line, something ND has sorely lacked in previous years. I’m not one to believe every little buzz word coming out of training camp (I mean, what guy is going to say he hates his new coach to the press? If a player did, I’d have to go get my cape out of the closet again), but there’s enough positive buzz that this will be worth watching. And with ND falling 209 yards short of having two 1,000-yard rushers for the first time in school history last season, there’s a very real possibility that, with strong line play, the Irish rushing attack will be even better than last year.

Has ND Hit the Jackpot in the Slot?

It never seems to be talked about but Brian Kelly has an eye for receiving talent. When Kelly arrived at Cincinnati, Mardy Gilyard was a Rivals 2-star running back with only one scholarship offer, not to mention Gilyard had been moved from running back to cornerback. Kelly flipped Gilyard’s position for the hat trick, this time to wide receiver. Fast-forward a few years and Mardy Gilyard finished his career with 204 receptions, 3,003 yards and 25 touchdowns. Oh, and I guess his being named an All-American, as well as Offensive Player of the Game at the 2010 Senior Bowl, didn’t hurt his cause when he was drafted by the St. Louis Rams.

Enter true freshman Davonte Neal. Neal is a Rivals 4-star wide receiver with speed and shiftiness the likes of which Notre Dame hasn’t possessed in a long time. If you haven’t watched his highlight film, do so immediately. I’ve watched it more than I can count, and every time it’s given me the vapors (and dirty looks from my girlfriend for saying “vapors” while watching a teenager’s highlight reel).

While Robby Toma is the starting slot receiver for the Irish, Neal is far too talented to redshirt and should receive (Why not? Pun intended) plenty of opportunities to show what he can do. It may be too early for him to become a dominant player but he has the ability to eventually lead Notre Dame down a path to the 4th best passing attack in the country, a feat Kelly accomplished his final year at Cincinnati.

A Sack is More Than a Bag at the Grocery Store

Let’s face it: if you’re a Notre Dame fan, you’re just not used to seeing sacks unless you watch former ND great Justin Tuck for the New York Giants play on Sundays. The Irish had 25 sacks last season, earning them a 59th national ranking. To make matters worse, recent USF transfer Aaron Lynch was responsible for 22% of that sack production.

The good news is former Rivals 5-star linebacker Ishaq Williams seems poised to have a breakout season his sophomore year. With Williams admitting he held himself back last year with his lack of aggressiveness, I cannot adequately describe the pleasure I derived from watching Williams hit a player a country mile out of bounds during ND’s Spring Game, nabbing him his first career personal foul. Sure, it was awkward I was standing up and cheering for a personal foul in a family-friendly atmosphere like a Spring Game, and maybe it did take me a bit too long to stop cheering even after the looks from mothers and children. But if a player is known for being laid back, watching him absolutely tattoo the opposition after a play has ended shows he’s definitely changed his attitude. Now all Williams has to do is find that happy-medium of aggression, and his quest to find it is well worth a watch in 2012.

In summary, yes, Lo Wood’s injury was crushing. My advice to you is to grab a paper bag to breathe into, have your mother make you a cape and enjoy the season.