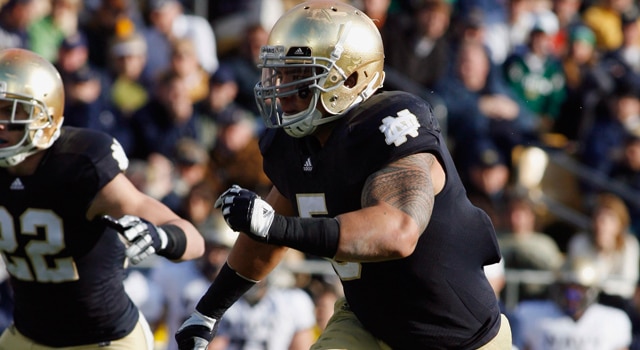 Notre Dame head coach Brian Kelly announced the captains for the 2012 season on Monday night and senior All Americans Manti Te’o and Tyler Efiert headline the quartet of captains with Kapron Lewis-Moore and Zack Martin joining them as season long captains.

Manti Te’o and Tyler Efiert have both found their names on numerous first team All American lists this pre-season as two of the premiere players at their positions in the country.  Both standout players had the chance to leave early for the NFL this past season, but both decided to return for their senior seasons – Te’o in the final year of his eligibility and Eifert with an additional season remaining in 2013 should he choose to use it.

Along with Te’o and Eifert, 5th year senior defensive end Kapron Lewis-Moore and senior left tackle Zack Martin form Notre Dame’s 2012 captains.  Lewis-Moore potentially could have left for the NFL after the 2011 season, but an injury midway through the season made a jump to the NFL unlikely for the Texas native.  Martin meanwhile enters his third season as a starting left tackle for Notre Dame with an additional year of eligibility left.

Te’o and Lewis-Moore both expressed how excited they were to be named captains by their head coach via Twitter.

Last season Notre Dame had just one line season long captain in Harrison Smith after Michael Floyd lost his captaincy role before the season following his off-season DUI arrest.  Floyd was able to redeem himself, however, and was named a gameday captain for the Champs Sports Bowl.

None of Kelly’s selections for captains should come as much of a surprise to anyone.  Te’o is pretty much the face of the 2012 Notre Dame squad and the first legitimate  star linebacker in a years.  He also embodies the values of a captain both on and off the field possibly better than anyone else to come through Notre Dame in some time.

One player not named a captain that very well could have been is senior center Braxston Cave.  Ever since he was recruited by then head coach Charlie Weis, Cave has been a leader for the Irish squad and was integral in keeping together what turned out to be the highest rated recruiting class under Weis.