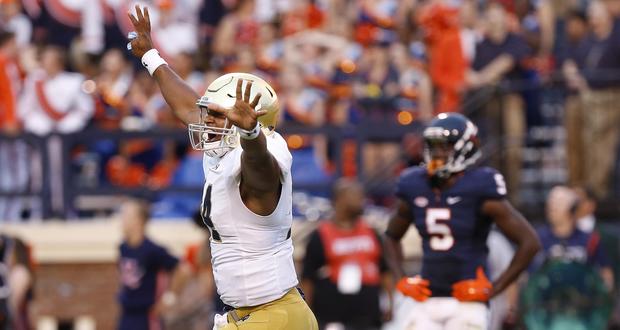 The 2015 Notre Dame football season was to be one of perseverance at the quarterback position, providing proof that with hard work, passion and patience, good things will happen. But no one could have guessed such descriptions would be for redshirt freshman DeShone Kizer and not starting quarterback Malik Zaire.

Kizer would be the last person you’d expect to make an impact this season. A former four-star recruit out of Toledo Central Catholic High School in Ohio, DeShone was described as a raw dual-threat athlete with a lively arm, and a six-foot-four-inch frame capable of taking punishment when running with the football. The one thing he lacked was polish, which led to sitting out the 2014 season to learn the nuances of the position.

Little was heard of Kizer this spring as he disappeared into the background while Everett Golson and Malik Zaire took center stage, dueling for the starting quarterback spot. With nearly all the reps going to the heated competition, Irish fans fortunate enough to observe practice were just as likely to see Kizer spending his time with the kickers practicing his holding duties than they were to see him actually taking reps at quarterback. Kizer’s offseason was made all the more stressful and gut-wrenching when a baseball-sized tumor was discovered in the neck of his girlfriend, Elli, which required an extensive 17-hour surgical procedure to remove.

Despite the lack of playing time in practice and the painful off the field situations, Kizer endured and was promoted to No. 2 on the depth chart upon the transfer of Everett Golson to Florida State, fending off feisty true freshman quarterback Brandon Wimbush in the process. But as fate would have it, Kizer would be in line for one more promotion.

In the waning moments of the third quarter Zaire would suffer a season-ending ankle fracture on a quarterback draw, forcing Kizer into a game very much still in doubt. Notre Dame’s coaching staff – perhaps foolishly – immediately threw him into the fire, forcing Kizer to make throws from the shotgun formation instead of leaning on its touted offensive line and running back C.J. Prosise, who averaged over nine yards per carry. And the pressure amplified when Virginia took a one-point lead with less than two minutes to go, leaving an inexperienced Kizer to march down the field to keep Notre Dame’s unblemished record alive.

With twelve seconds to go in the game, DeShone Kizer took the leap from one-time No. 3 quarterback to unlikely hero. Kizer rolled to his left after an excellent blitz pickup from Prosise and unleashed a perfect pass to star wide receiver Will Fuller – who had whizzed past senior Virginia cornerback Maurice Canady – for the game-winning 39-yard touchdown, lifting Notre Dame to a 2-0 record with Georgia Tech looming on the horizon.

The Fighting Irish’s showdown with the Georgia Tech Yellow Jackets – which was to be the first true test for Notre Dame’s College Playoff aspirations – has become much more daunting with the loss of Malik Zaire. Georgia Tech boasts an explosive offense that has scored a combined 134 points in its first two games. Head coach Paul Johnson’s squad demolished Tulane 65-10 while accumulating 571 yards of offense, 439 of which were gained on the ground. Quarterback Justin Thomas has lived up his star status, throwing for two touchdowns while chipping in an additional 71 yards and one touchdown with his feet.

If Notre Dame is to have a chance against Georgia Tech they will have to score, and score often. Notre Dame head coach Brian Kelly will need to pull from the bag of tricks he used at Cincinnati when, in 2009, starting quarterback Tony Pike went down with injury, and Kelly was forced to start inexperienced redshirt sophomore Zach Collaros. Collaros would preserve Cincinnati’s undefeated regular season by winning the four games he started, completing 75-percent of his passing attempts and throwing 10 touchdowns to only two interceptions along the way.

It’s too soon to know if DeShone Kizer is truly comfortable with the label of starting quarterback. For now, the label of hero will have to do.

Scott Janssen is a blogger for the Huffington Post and has authored several nationally-featured articles, including an appearance on MSNBC as a sports contributor. He talks football24 hours a day, much to the chagrin of his wife and those around him. Scott can be reached at scottjanssenhp@gmail.com or follow him on Twitter.