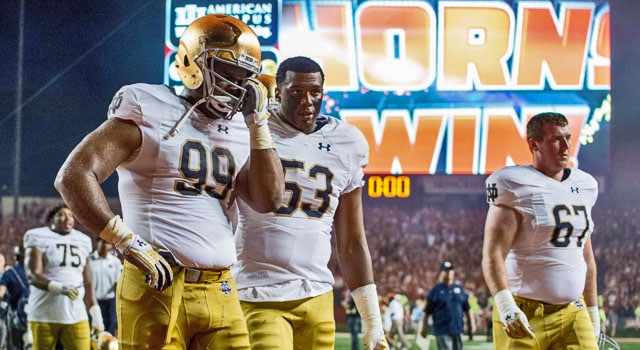 Week one is in the books and it brought the first market crash for the Notre Dame defense as they gave up 50 points and 517 yards on six yards a play in the loss to the Texas Longhorns and their freshman quarterback Shane Buechele. It was a performance that went against previous versions of the Irish defense early in the season, as was noted in the Week One stock report, which usually sees the unit perform at its best. That was certainly not the case on Sunday.

CJ Sanders continued his ascent in the Irish lineup with several good returns and three catches for 55 yards and a touchdown, with 45 of those yards coming after the catch. His stock continues to be on the rise. Jay Hayes, who was soaring as a player through spring practice and fall camp was held out of this game seemingly due to lingering effects of a high ankle sprain. Given his ability to stop the run and the struggles the defense had running the ball, his presence appeared to be sorely missed.

Let’s take a look at the Notre Dame stock market as we head into week two.

Studstill did not receive the start at free safety, but he was brought in late in the second quarter in favor of struggling junior Dru Tranquill and played admirably in his stead. He was solid as a tackler, providing seven tackles in less than a full game, and gave the defense a little more range at safety to disincentivize Texas from just chucking the ball deep every third play. A lot has been made about the football instincts of Studstill at safety, and sometimes that can be hard to identify for a fan. Those instincts were on display late in the 4th quarter with Texas driving and the game tied at 37 and Studstill jumped a pass in the flat that had been killing Notre Dame all night. Unfortunately, Buechele saw him and tucked the ball and ran for a first down. However, how many of us at home were getting sick and tired of that seven yard hitch route that was open all night? Turns out, Studstill was tired of it as well, and he broke coverage to try and make a play. First, that’s pretty gutsy from a freshman in his first game. Second, that shows a strong feel for the game right off the bat. I’m very high on this young man.

It might seem crazy that two defensive tackles are seen as having their stock rising after a game in which the team gave up 237 yards rushing and got little or no pass rush. But, you may be surprised to know that  Tillery and Cage were two of the highest graded defensive players according to Pro Football Focus with Cage leading the team at 77.5 and Tillery finishing with 70.9 (check out my guy Studstill with a solid 73.8). If you think about it, this makes perfect sense. If you are playing a defense that insists on playing a three down front against a team that is determined to run the ball right at you, then playing well doesn’t necessarily mean lots of production. It could very well mean that given the disadvantage the players were  put in, they did well to get what they did out of the situation. This tells us a couple of things. First, the team may not be as bad on the defensive line as we think they are right now. And two, they aren’t good enough to make up for a poorly thought out strategy defensively. We know the second one is true, we still need more evidence to make some determinations about the first.

The most common lament I’ve seen on Twitter and the message boards following the loss to Texas was the lack of talent Notre Dame has on defense. It is completely understandable to have that feeling after watching the game, in which every defensive player looked lost, a step behind, or played down right sloppy. Pro Football Focus had Notre Dame down for 24 missed tackles on Sunday night. Incredibly, that number seems low.

Here’s the thing, though, about the “Notre Dame doesn’t have talented players on defense” narrative. These are the same types of players Notre Dame gets to play offense, and no one says a thing about the talent level of that group. Think about it, what five star players is Notre Dame trotting out there on offense? None. They are littered with four star guys, as is the defense. The offense consistently performs at a high level, and the defense consistently performs at a lower level, at least in the last two seasons and one game. Consider that a guy like Jaylon Smith, who was by far the best talent at Notre Dame defensively since Manti (and was probably better) and a consensus top five pick before hurting his knee, was never the MVP of the Notre Dame team. That distinction went to a former walk-on in Joe Schmidt–who played eight games–and Will Fuller, a receiver who ESPN had as a three star and the worst recruit in the 2013 class.

When Jaylon Smith is turned into a guy who simply racks up tackles and is used to “clean up the mess”, as Brian Kelly put it, it’s extremely hard for me to say “we just don’t have the players.” Notre Dame had the best player in the nation last year and they were still subpar. And an offense with the same caliber of players seems to do quite well with the talent that is on hand. It is pretty clear what’s been going on here with the defense the last two seasons, and I don’t think it’s the talent level.

Why have rules? Why have replay?

Let’s be honest, nobody wanted to play two quarterbacks, it almost never works when you have two guys who want to start and do the same thing. I love Malik Zaire. He’s a great person, he’s a great player. This is DeShone Kizer’s team. The problem with agreeing to have the quarterbacks take every other series is you ultimately end up sitting the better player for extended periods of time. The most popular sentiment around the argument to play both guys is they are two of the best five players on the offense, so they both need to play. And on the face of it, that makes a lot of sense. The problem is, Kizer is the best player on the entire team. Sitting him for any amount of time is a disservice to all of them.

In a perfect world, Crawford stays at nickel and Nick Coleman figures out what’s going on at corner. But, of any one player who struggled the most on Sunday, it was Coleman. Notre Dame made the move to Julian Love in the third quarter, keeping Crawford at corner with Love at the nickel. Love held his own out there and as the starter Crawford is the preferred option at corner in that instance.

Injury might dictate this move as Avery Sebastian suffered a concussion late in the game against Texas. It was odd in general that Studstill’s insertion into the lineup came at the expense of Tranquill. It would have seemed to make sense that Tranquill would move to Strong Safety and Studstill to Free Safety. Tranquill’s game is more suited to being closer to the line of scrimmage and he is the better athlete to Sebastian just overall.

It’s pretty clear Sanders needs the ball in his hands much more often. He dazzled on some punt returns, took a crossing pattern and made a number of Texas defenders look a little silly as he weaved his way across the field, and of course the middle screen for the touchdown in the first overtime period. This is a special player in the open field. Look for more screens, jet sweeps and overall involvement in the passing game as Notre Dame needs more playmaking from the offense sans Fuller and Prosise. The hype regarding Sanders’ fall camp performance appears to be real.