Notre Dame won a football game on Saturday, which is a good thing. A lot of people are upset about this good thing that happened because winning and losing is almost beside the point at this juncture of the season. It’s all about “the standard” now, an elusive and subjective metric we use to decide whether the game was a success or whether it was a failure. So while Notre Dame won, they almost lost, which means it’s basically a loss, and it was to a “bad team” on top of that, which makes it all worse.

The reason we are at this place is the responsibility of the team, of course. When you get blown away by your rival in a big game to knock yourself out of playoff contention and eliminate the chance of what everyone would agree is a great season, the glass is officially half empty. That’s just the reality of it.

But, the milk is spilled, there’s nothing that can be done about what’s already happened, and the focus on a standard of play versus wins and losses only makes things worse. We’ve seen multiple Notre Dame teams miss out on their goals, and then the season falls apart, and I think in large part because of this standards vs. results question.

“The Standard” Ought To Be Winning

I mainly blame this on Brian Kelly, who always talks about playing to standards instead of playing for wins, and he ought to stop. Frequently he mentions playing to the standards when they play a lesser opponent, like Bowling Green, which is just code for “don’t have a letdown,” and isn’t something he should be reminding players on the day of the game. He can, of course, but if their level of play hasn’t been figured out before the contest–like say, at practice–then telling them not to play poorly isn’t going to be effective.

Speaking of level of play, this team has shown us week after week this year what they’re about and what level they can reach. And it has consistently been below playoff-caliber, which is why they were never very high in the advanced metrics like SP+. This isn’t them playing below the standard; it’s just who they are. If you’re watching them play at this point and feeling disappointment because they don’t look the way you expect, that’s pretty much on you. And maybe you’re the type of person who won’t settle for inefficiency or anything less than greatness (which would be weird since those types of teams haven’t really existed for Notre Dame in the last 30 years), in which case you’ll either stop watching or be very upset every weekend.

This isn’t to say Notre Dame should lower the goals or settle for something less than the playoffs and a national title as a program but in season? Where does that leave this team? The players aren’t going to just quit. And they can’t go back in time and do over Georgia and Michigan. All that’s left is to win the rest, however they can.

Winning Should  Always Be Enough

Which brings me to this. The signs have been apparent from the start that this team wasn’t as good as expected in the pre-season. The offense hasn’t been sharp against Power 5 competition, the defensive line not the week to week game wreckers we thought. Folks griped about the slow start against Louisville and Virginia, and the close call against USC. The most significant evidence Notre Dame had a chance to make a run was in a close loss at Georgia. That was, of course, all taken away against Michigan.

We’ve seen them be inconsistent on offense and defense all season, it cost them their two big games, and now all that’s left for them to play for is a double-digit win regular season. Surely this is a let down for the team after their success last season, and there was a predictable sloppiness to their play yesterday. They played like a team that wasn’t sure; their overall confidence was shaken.

But, they found a way to win, despite their sloppiness and their mistakes. And that should be enough for them and everyone else. It doesn’t matter how it looks anymore; there is no one left to impress with nice window dressing. Just win the games and be happy when you do. Don’t feel bad about winning close to Virginia Tech, or Duke next week, or any other team on their schedule. These are all Power 5 teams, and freakin Navy, who sits at 7-1 and is ranked #31 in SP+.

Should Notre Dame run the table the rest of the season, it will be a heck of an accomplishment, all the while not meeting the ultimate goal. At this point, it’s the best they can do, and if it comes, however it happens, no one should feel bad about it. Sure, there will be bad plays and frustrating moments and perhaps some unforgivable coaching mistakes. But, the focus should be on winning, which a real thing, and not on meeting some standard, which is a made up thing that means different things to different people.

Just win the games, and to heck with everything else. 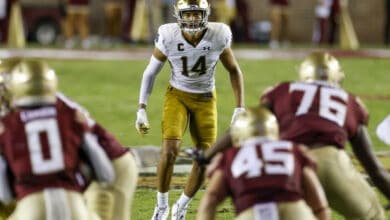