The Notre Dame football team is a little less than halfway through spring practice, with seven practices in and another seven prior to the final scrimmage on May 1st. While the Notre Dame beat reporters have not been able to attend any of the practices, the football team has been releasing three minute videos to the public after each practice. Usually we’d never be getting access to this kind of footage, with numerous shots of team scrimmages, one on one’s, and seven on seven action. So, while it’s been bad for the beat, it’s been great for the casual fan.

Because of this access, it’s a lot easier for us to make some of our own observations, rather than rely on others to tell us what they see. So let’s do that now, starting with the offense, position by position. And before we get into it, I just want to point out that the video clips do not portray a team that is going through the motions of spring practice. Everything feels competitive and high level. It could very easily be just the way it’s edited, and if so great job by them, but it has stuck out every time.

The depth so far is the biggest standout, with numerous big bodies inside, tons of athleticism outside, and a nice mix of players who have either proven themselves capable in games or are highly touted recruits who are poised to breakout.

By the looks of it, this group has completely dominated the green offensive line, with Kurt Hinish and Jayson Ademilola wreaking havoc inside, and the trio of Myron Tagovailoa-Amosa, Isaiah Foskey, and Jordan Botelho at end have flashed over and over again in the videos.

In addition, Rylie Mills looks like some kind of a monster, as does early enrollee Gabriel Rubio, and we’ve seen flashes of Justin Ademilola and Nana Osafo Mensah. Given the depth and talent of the front, this may be the group fans can feel most confident about on the entire team. Marcus Freeman has to be salivating.

First of all, I’m going to assume starting linebacker Drew White has some sort of ailment because he’s been missing from the practice videos lately. Haven’t heard anything concrete, or if it’s anything serious, but you’d think if it was serious there’d be some public info on it.

But, from what we’ve seen on the field, this group has looked dynamic, aggressive, and has been making plays in the backfield. Shayne Simon has flashed more than a few times, Bo Bauer is everywhere, Marist Liufau is flying on the blitz, and even JD Bertrand has made plays in the videos.

There is so much we don’t know about this group, especially with White out at the moment, as well as how Rover is going to adjudicate itself, though we’ve seen Jack Kiser playing that spot a bunch and he’s made a number of plays in pass coverage, including a pick six of Drew Pyne in a seven on seven drill.

There are more questions at linebacker than on the defensive line, but given the number of talented options at the position, and the fact that it’s coached by Freeman himself, it’s look good enough to give fans good feelings about the group.

Of every position group on the team, this is the one that has looked the roughest. It makes sense, practice vids are geared towards highlights, and when there’s a bunch of one on one’s and seven on seven action to choose from, which heavily favors the offense, the corners can look rough.

We’ve seen Cam Hart make some plays, and Brian Kelly singled him out yesterday for his improved play. Clarence Lewis has looked pretty shaky at times, but he’s continued to earn first team work, so he appears to be pretty locked in with that group.

The other notable action is early enrollee Philip Riley has been seeing getting first team work at corner, though we haven’t seen much playmaking from him.

There is a long way to go in the spring, and in the season, for this group and they’ll probably need it to get caught up to speed. The biggest question on the defense at the moment.

Houston Griffith was one of the most highly anticipated players participating this spring and he has not disappointed so far. Brian Kelly said yesterday he’s playing with a very high football IQ and the game is coming easy to him at the moment. If you follow the team closely at all, you understand the importance of any safety, in this case Griffith, having a strong spring to compliment Kyle Hamilton, who is out while rehabbing his ankle following offseason surgery. Griffith has been steady in the videos making tackles, being the right position, and has mixed in some playmaking as well.

DJ Brown has looked the way he has always looked. Consistently around the ball, consistently a step away. If he can make that last leap from someone who is there but unable to make the play, to someone who is making those plays and we’ve really got something at the safety position.

The other notable player here is early enrollee Justin Walters, who has gotten a ton of reps with the second team, which should serve him very well in the fall. 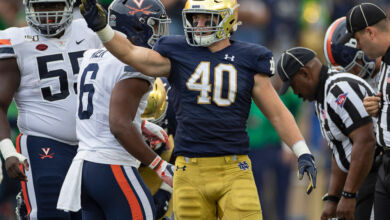 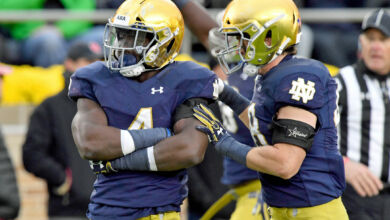 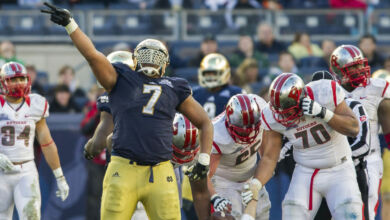