Brian Kelly told the media last weekend that he would announce the Notre Dame captains on Monday of this past week. It took a few days longer than Kelly expected, but on Friday, Notre Dame announced seven captains for the 2021 football season. This marks the third time in the last five years Notre Dame will feature seven captains.

Myron Tagovailoa-Amosa. The 5th year senior is currently going through a personal tragedy at the moment with the sudden and unexpected loss of his father. When he returns to camps, he’ll do so as a captain for 2021. The Hawaiian native is one of the more likable players on the team and a veteran on one of Notre Dame’s deepest position groups.

His inclusion as a captain seems like a no-brainer even though his inclusion in the recruiting class of 2017 wasn’t at the time. Tagovailoa-Amosa was one of several late additions to that class following the coaching turnover in the aftermath of the 2016 disaster.

Kurt Hinish. Another no-brainer to the captains as perhaps the face of the Irish defense. When he announced he would return for a 5th year, utilizing the free year of eligibility granted by the NCAA during the pandemic last year, he did so in a way that only he could.

Avery Davis. Of the group of captains, none of them has faced as much on-the-field adversity as Davis. He was recruited as a quarterback before moving to running back, then cornerback, and then finally wide receiver. Many players would have transferred at some point during that rollercoaster, but Davis always kept his head down and did what was asked of him. He finally found a home at receiver and made one of the biggest plays of the 2020 season with his long pass from Ian Book in the 4th quarter of the Clemson game.

Kyren Williams. It’s rare for Notre Dame to name a junior captain, but the offense runs through Kyren Williams and he is the spark plug both on and off the field for the Irish offense. He is the leader of a deep and talent running back room, and there is a chance that this is his last year if he replicates his 2020 success this fall. It’s remarkable that just two years ago, Williams had a disappointing freshman season that saw him relegated to scout team duty most of the season. Two years later he’s a captain.

Kyle Hamilton. He’s Notre Dame’s best player, maybe by far, on the field and he has grown off of it into one of the leaders of this team. I think we all know that Hamilton’s time at Notre Dame is short as a projected top 10 pick in the 2022 NFL Draft so it’s great to see Notre Dame learn from the mistake of not naming Jaylon Smith a captain in 2015 with the inclusion of Hamilton.

Drew White. Most Notre Dame fans were surprised when White won a starting gig two years ago. No one is surprised anymore and no one is surprised that White was named a captain today. He’s the favorite to lead the team in tackles this fall and early reports out of camp are that White has bulked up for this season.

Jarrett Patterson. The only returning starter along the Notre Dame offensive line, Patterson is one of the leaders of the entire team, not just his position group. Like Tagovailoa-Amosa, Patteson was a late addition to his recruiting class after a coaching change at his position group. Jeff Quinn‘s first big win on the recruiting trail could ultimately be one of his biggest.

Seven captains is a lot, but there isn’t a lot of position group redundancy giving Notre Dame a captain at almost every level of the offense and defense – everywhere really except quarterback. Some thought that Jack Coan might have been a captain this year, but having a grad transfer being named a captain would have been unprecedented. 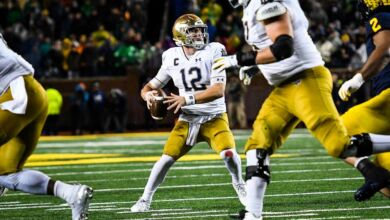 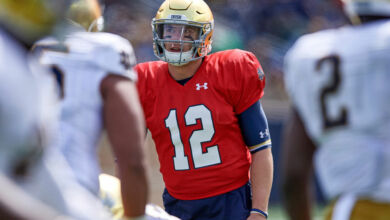