Notre Dame opened their ACC schedule with a win over Georgia Tech on Saturday afternoon.  The Irish beat the Yellow Jackets 68-59 after a sluggish start that didn’t see Notre Dame take its first lead of the game until a few minutes into the second half.  The win was Mike Brey’s 393rd as the head coach of the Fighting Irish which ties the school record held by Digger Phelps.

Bonzie Colson carried Notre Dame as he tends to do often with 22 points and 17 rebounds (tied for a career high).  All five members of Notre Dame’s starting line though did reach double figures: Martinas Geben (12), Rex Pflueger (11), TJ Gibbs (10), and Matt Farrell (10).  Geben’s 12 points were highlighted by three thunderous dunks in the second half.

The Irish bench, however, contributed just three combined points in the victory.  Notre Dame will need to find some help off its bench as it gets deeper into ACC play.  For Saturday though, the starting five powered by Colson’s monster afternoon was enough to start ACC play off with a W.

Notre Dame and Brey will go for record breaking win #394 on Wednesday when the Irish host North Carolina State.  The Wolf Pack are owners of a 10-4 record.  The game will tip off at 9:00 and will be broadcast on the ACC Network Extra (steaming through Watch ESPN). 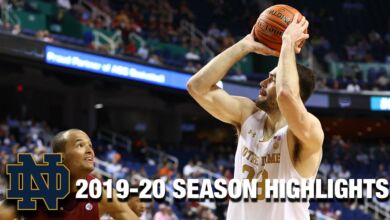