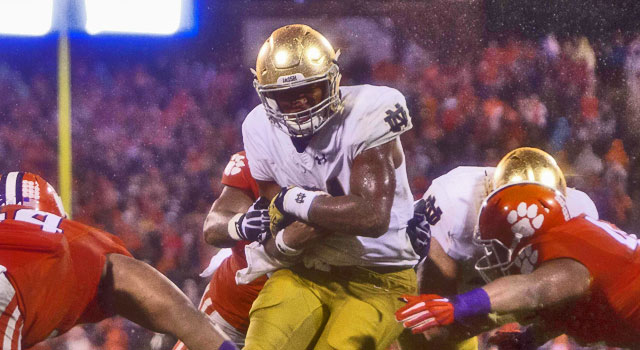 Notre Dame saw its dreams of an undefeated season fall apart in Death Valley on Saturday night, falling to Clemson 24-22. The Irish turned the ball over four times, had many costly dropped passes and were handicapped by perplexing play-calling, which combined to cost them the game. The Irish offensive line was also exposed as they could not open up holes for C.J. Prosise until late in the second half. Brian Kelly and the coaching staff also failed to make adjustments offensively, rarely passing on first down to create space despite consistently being stuffed on first down runs. The following players stood out in an otherwise disappointing game for the Irish:

The Irish quarterback did a very solid job in his first road start in a very hostile environment. Despite many crucial drops by his receivers and the complete lack of a run game, Kizer gave the Irish a chance to win. Kizer kept many plays alive with his feet, finding receivers downfield after scrambling and led the team in rushing with 60 yards and a touchdown. The Ohio native also threw for 321 yards and two touchdowns versus the Tigers, but would have been over 400 yards passing if not for drops.

Although it was not his best game Notre Dame’s number one running back had a solid showing versus Clemson. Prosise ran for only 50 yards on 15 carries, although that was no fault of his as the offensive line’s play was poor. However, Prosise made up for his struggles on the ground by making plays in the passing game. He led the Irish in receiving with four catches for 100 yards and a touchdown.

Seemingly close to fully healed from a hand injury Redfield was steady at his safety spot. The junior led the Irish defense in tackles with 14 and had more solo tackles (11) than any other member of the Irish defense had total tackles. Redfield supported well in run defense and was crucial to the Irish preventing big plays in the passing game.

Luke was another key player in limiting the Tigers to 97 yards passing. The junior corner also had a critical interception late in the third quarter to give the Irish life and start their rally. Luke also showed flashes of potential blitzing to combine with his solid cover ability. The Arizona native had two tackles to go with his interception.