Notre Dame limped into the Citrus Bowl losing two of their last three games with four players suspended and one of their starting receivers getting injured in practice.  To snap their January bowl losing streak they were going to need some players who haven’t done that much this year to step up.  Well, the Irish got just that along with some characteristically great performances from some of their star players and as a result beat LSU 21-17 to win their 10th game of the season.

Here are the top four players from Notre Dame’s Citrus Bowl win over LSU in the final Four Horsemen of the Week post of the year.

Best Player in the Country!

And here he is throwing around a big bad SEC defensive lineman like a rag doll.

We have been lucky enough to watch one of the all-time greats play for the last three years.  In fact, we won’t even be writing about how Notre Dame will attempt to replace him in the lineup next year because that would be impossible.

Again, Book and Boykin will get the headlines (rightfully so) but the only reason that Book and Boykin had the opportunity for their 4th quarter magic was because of the job the Notre Dame defense did throughout the game.  Tevon Coney played like a man possessed today with 17 tackles.  Coney’s 17 tackles give him 116 on the season.  Drue Tranquill was right behind him with 11 today and he played a whale of a game as well, but Coney was just on another level.

Notre Dame fans should be praying now that Coney’s game wasn’t enough to get him to leave for early for the NFL.  Should he return for his senior season, he’ll almost certainly move to the MIKE to replace Nyles Morgan and will very likely be an All American.  On Monday, he was the best linebacker on the field for either team.

Boykin took home the MVP honors, but Book turned in a pretty remarkable performance considering he started the game on the bench and got second team reps for much of bowl preparations.  When he came in the game, the Notre Dame defense showed some signs of life and while everyone will point to his 73% completion percentage for why he played better than Wimbush, but it was in the running game where Book really excelled.  Wimbush had not been making good reads on the zone-read over the last few games and that continued today.  On more than one occasion Book kept the ball and found wide open space to run by making good reads.

The difference between Book and Wimbush throwing the ball was very apparent.  While Book made one really bad decision that resulted in an interception, Book made throws that Wimbush wasn’t making.  Case in point came in the first quarter when Wimbush had St. Brown running wide open on a short route and couldn’t connect with him 5 yards from the line of scrimmage.

Book led Notre Dame on four scoring drives in five attempts.  The lone exception was his interception and even that occured in the red zone so Book had the Irish moving.  If Ian Book can eliminate the bad plays, he has a chance to win the starting quarterback position for 2018.  Can’t believe I actually just typed that.

Boykin made the headline grabbing play with his amazing one hand grab and run that gave Notre Dame the victory.  That wasn’t his first great catch of the game though.  Earlier in the 4th quarter Boykin hauled in a perfectly placed pass from Book between two defenders.  Boykin got lit up on the play but he made the catch and most importantly – he held on to the ball.

With Chase Claypool out with an injury and Kevin Stepherson suspended, Notre Dame needed a young receiver to step up. Boykin did just that.  With his breakout game, Boykin will now head into the off-season with a starting position in his sights.  It’s hard to imagine Stepherson ever playing for Notre Dame again and it’s still possible that Equanimeous St. Brown leaves for the NFL.  Even if St. Brown returns though, Boykin should be in the mix. 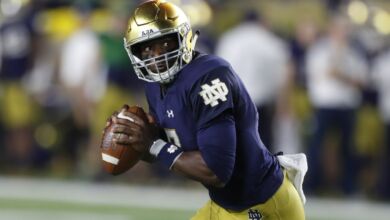