David Bruton made me look pretty smart yesterday.  For the last year or so I’ve said that Bruton would test off the charts and really improve his draft stock at the NFL Combine, and yesterday he did just that.  Bruton, the lone Notre Dame representative at this year’s combine, checked in at the top of the pack in every drill he ran yesterday in Indy and likely helped himself out quite a bit. 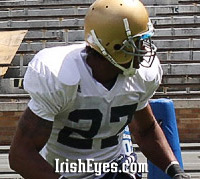 Here are his numbers from yesterday:

I’d say those results prove that Bruton pretty much owned the combine.  The 3 cone drill time surprised me some because he is a long strider and the 3 cone drill measures change of direction.

The Tampa Bay Bucs site Pewter Power said Bruton was the most impressive safety but still thinks he is a 5th or 6th round pick.

Bruton might have been the most impressive athlete out of the safety group on Tuesday. He ran a 4.46 40-yard dash time, which was third in the defensive back group, posted a 6.60 3-cone drill time (second best out of the safeties) and led the safeties in the vertical (41.5 inches) and broad jump (11’0″). Bruton posted seven interceptions at Notre Dame, including four picks in 2008. He helped his stock tremendously at the combine, but Bruton, who was inconsistent in college, still is projected to be a fifth or sixth round selection.

Sorry, but there is NO way a team with a need at safety lets Bruton out of the 4th round after the numbers he posted at the combine.  The only thing holding back Bruton from being a very high selection is his tackling.  He missed quite a few tackles over the last two seasons as a starter.

My beloved Eagles will likely be looking for a replacement for Brian Dawkins (assuming they resign him) in this draft and I would be thrilled if they could pick up Bruton in the 4th.

Corwin, We Need You in Chicago in '10 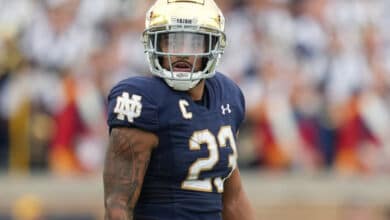