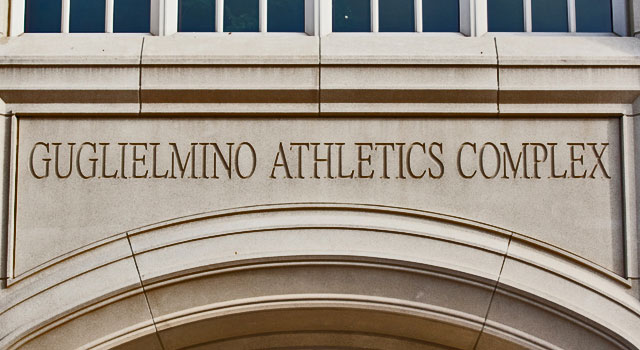 Former Heisman Trophy winner and Florida State quarterback Jameis Winston swung by Ann Arbor, MI, to visit Wolverines head coach Jim Harbaugh for some last minute, pre-NFL Combine advice. Winston had a lot to say about his visit to Michigan’s campus, but the NFL Combine wasn’t at the top of his list of discussion points.

“These guys don’t know how blessed they are to have this kind of facility,” Winston told the media in regard to Michigan’s players. “I mean, Florida State, we’re a very prestigious school, we have nice stuff, but we don’t have this. I’m sorry, I love Florida State. Go ‘Noles ‘til the day I die, but they’re so much [more] advanced than us.”

If you think Winston’s comments were merely a ploy to land one last job at his old school, a place where his relationship was almost always strained, think again. Former Baylor quarterback Bryce Petty – who also made the trek to Ann Arbor – echoed Winston’s sentiments.

“This is bar-none the best one that I’ve seen,” Petty said.

Lots of factors lead to a high school athlete choosing one university over another: academics, desire to play in the NFL, location. But one factor every prospect considers before making a decision is how comfortable they feel with their surroundings, and football programs have been engaged in an all-out arms race to make their facilities a home away from home.

The University of Michigan has invested large sums of money into their facilities in recent years, as Winston observed. The Wolverines possess a 104,000-square-foot indoor practice facility that includes a renovated locker room and weight room for a total cost of $26.1 million, which preceded the $226 million Michigan spent renovating the Big House in 2010. In addition, Michigan announced plans in 2012 to upgrade all of its athletic facilities over a 10-year span for $250 million.

As impressive as Winston’s visit to Michigan may have been, the former Seminole’s comments to the media won’t play well in Tallahassee. Florida State finished upgrading its facilities in 2013, four years after Michigan’s 2009 renovation. Additionally, in 2012 ESPN listed Michigan as only third in the Big Ten for football facilities, trailing Ohio State and Nebraska respectively.

While Jameis may not have been overly impressed with Florida State’s resources, Forbes would disagree.   The business magazine penned an in-depth feature of the unveiling of Florida State’s upgraded facilities, labeling them as “spectacular.” The renovated space, approximately the same size as Michigan’s facility, was funded by Florida State’s “Champions Campaign”, a $250 million fundraising initiative. Each locker is equipped with an iPad linked to Florida State’s video system so players can review game or practice film at any time, a setup very similar to most NFL teams. Florida State even had a life-size College Gameday set constructed where recruits and their families can have their pictures taken.

Forbes concluded its review of Florida State’s facilities on a prophetic note, stating that football recruiting is no longer a matter of a “campus tour and a nice dinner”, but has instead morphed into “helping the athlete see how he can fit into a story bigger than himself and into a story that is unlike one being told anywhere else.”

The University of Oregon took Forbes’ advice of being unlike everyone else to mean being a cut above the rest. The Oregon Ducks built the Taj Mahal of football facilities with an eye-popping 145,000-square-foot complex – 39-percent larger than Michigan’s and Florida State’s – at a cost of a cool $68 million. Phil Knight, co-founder and Chairman of Nike and an Oregon alumnus, describes the facility replete with Nike paraphernalia as a “Darth Vaderish Death Star.” The groundbreaking Oregon facility includes a barber shop, a coaches’ “war room” and even a hot tub for the coaching staff.

Notre Dame’s Guglielmino Athletics Complex, dubbed “The Gug”, was a step into the modern era when it opened in 2005. Prior to The Gug’s construction all of Notre Dame’s football facilities were scattered about campus, from Notre Dame Stadium to the Loftus Sports Center and the Joyce Center. The Gug centralized the football team’s location and offered a much needed facelift to the Fighting Irish’s structure. Ten years later Notre Dame’s facilities – measuring at 96,000-square-feet and costing $21 million to construct – appear modest in comparison.

While no plans are in the works to renovate or expand The Gug, head coach Brian Kelly and athletic director Jack Swarbrick have made substantial strides in overhauling Notre Dame’s program.   Swarbrick and Kelly orchestrated the installation of FieldTurf into Notre Dame Stadium, signed an historic 10 year, $90 million apparel deal with Under Armour and recently began construction on a $400 million stadium renovation project.

Notre Dame has long walked a fine line between staying competitive in the increasingly outlandish college football arms race while maintaining its status as an academic-first institution rather than an NFL farm system. It’s the reason why, to this day, players on Notre Dame’s football team board with the rest of the student body in dormitories rather than in condos or apartments made exclusively for athletes, a common practice for many universities. It’s one of the many elements that have always made Notre Dame unique.

Forbes describes college football as an increasingly chaotic free-for-all where programs continuously try to outspend one another in order to tell a recruit a “story that is unlike one being told anywhere else.” For Notre Dame, its story has always been unlike the rest. And for many future college athletes, that might very well be the story they’ve waited to hear.

Even if it means the coaching staff doesn’t have its own hot tub.