Wide receivers coach Mike Denbrock has a tough task in front of him this spring.  Replacing three starters is never ideal, but how do you replace three wide receivers that accounted for 142 receptions and 2,210 yards as well as 19 touchdowns?  Answering that seemingly unanswerable question is Denbrock’s task, and while there is still a long road ahead, senior wide receiver Torii Hunter Jr. is developing into the weapon Notre Dame fans believed they were getting when he signed his letter of intent in 2013.

The son of retired MLB star Torii Hunter, Hunter Jr. was an unheralded 3-star prospect from Prosper,Tex., that failed to make Rivals.com’s list of national recruits.  Despite his under the radar status Notre Dame recruited Hunter hard, a move that paid substantial dividends for Notre Dame after Hunter won MVP of Nike’s The Opening, one of the nation’s premier showcases for the best high school football talent in America.  Hunter’s eye-opening performance at the event landed him offers from the likes of Nebraska and Oklahoma and bumped him to 4-star status, but the early relationships established with Notre Dame put the Fighting Irish over the top for his services.

What promised to be a stellar career was sidetracked before it even began when Hunter Jr. broke his femur during practice week for the U.S. Army All-American game.  The injury stunted his development and forced him to sit out his entire freshman season, and limited his game action to seven receptions his sophomore year.  Last season, however, Hunter began to flash hints of his potential, hauling in 28 passes for 363 yards, including a beautiful one-handed grab against Ohio State in the Fiesta Bowl.

Head coach Brian Kelly has previously said Hunter’s limited appearances in 2015 had far more to do with the supreme talent of players in front of him – like All-American and Fred Biletnikoff watch list wide receiver Will Fuller – than anything else, and with those players finally gone, is Torii Hunter Jr. ready to step into the spotlight?  If this spring is any indication, Hunter is becoming a weapon.

Torii Hunter Jr. was recruited to Notre Dame to play as a slot wide receiver, or the Z position in Kelly’s offense, and he split time with Amir Carlisle at the position last fall.  But given his elite athleticism – after all, there’s a reason he’s a two-sport athlete at Notre Dame – he has the ability to play outside at the X position, the same position Will Fuller occupied last season.  Realizing the best way to weaponize athleticism is to give it flexibility, Kelly asked Hunter to learn all of the wide receiver positions this off-season.

“Coach really stressed that I should learn every position and know the concepts,” Hunter told the media recently.  “I’m not striving [to play] any position.  I told coach just keep moving me around until you find a fit for me.  I don’t really have a preference.  I played Z last season…I’ll just work to be the best at it.”

Hunter’s willingness to move around will provide Notre Dame with plenty of creativity this fall.  For example, if C.J. Sanders is able to translate his electric performances in the return game to the Z position Hunter could bump outside to the X, allowing Notre Dame to have two extremely quick athletes on the field at the same time.  Additionally, Kelly could move Hunter inside to the Z position in certain situations and bring sophomore Equanimeous St. Brown in to the X, which would give Notre Dame St. Brown’s size (6’4”) on the outside and a potential mismatch against the opposing defense with Hunter paired against a nickel cornerback.  Kelly could even give Torii Hunter a bit of the C.J. Prosise treatment and line him up in the backfield only to motion him into the Z spot to try and get a mismatch against an opposing linebacker.  The possibilities are plentiful.

How will Mike Denbrock replace the talent lost at wide receiver?  While still working on an answer, the freedom of movement that Torii Hunter is primed to give the Notre Dame offense will go a long way to making his job easier. 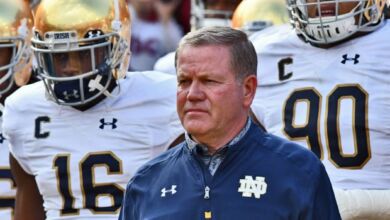 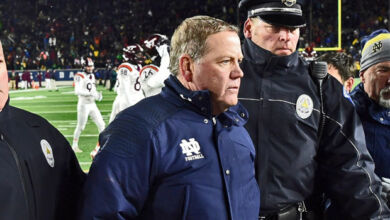 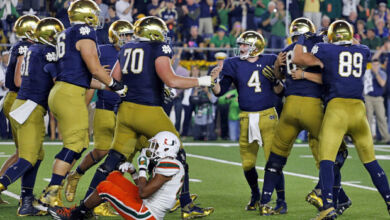