When Mike Denbrock left Notre Dame to become the offensive coordinator on Luke Fickell’s first staff at Cincinnati, we heard a lot about how Denbrock was going to lose his play calling duties at Notre Dame.  At the time, it was assumed Brian Kelly was taking them back under his control.  Then when news broke that Notre Dame’s new offensive coordinator was 33 year old Chip Long, we heard again how this was in an effort for Kelly to call the shots.  Well, not so fast my friend.

Notre Dame finally officially announced the hiring of Chip Long yesterday – gotta love that swift background check process at Notre Dame.  In the official announcement there was a bit of a bombshell layered in with the standard press release fluff.

“Chip will be given the full responsibility to call plays in 2017,” said Notre Dame head coach Brian Kelly. “His offense at Memphis displayed a unique blend of physicality, athleticism, versatility and explosiveness. Chip’s play-calling created mismatches all over the field and did it in a number of different ways. He likes to use players who can fill numerous roles in an array of formations, whether that be two and three tight ends or multiple running backs.”

This is big news for Notre Dame football, folks.  If Denbrock took the job at Cincinnati because he would be losing play calling duties, that means Kelly decided instead to hand over those duties to a 33 year old coach with one season of coordinator experience over a long time, trusted assistant coach.

Many felt that Kelly’s selection of Long was meant to bring in a young, fairly inexperienced coordinator to run his offense exactly as he wanted it.  If Chip Long is indeed calling the plays in 2017 though, Kelly has just handed over the keys to his offense to a young, up and coming coach who may just have some fresh new ideas for the Notre Dame offense.

It’s also very telling that Kelly has already announced that Chip Long will be given this responsibility.  Remember, when Kelly brought Mike Sanford on as offensive coordinator in 2015, he was evasive over who was calling the plays between Sanford, Denbrock, and himself.  It wasn’t until the end of the 2015 season that we knew who was actually calling the plays.   That vagueness led in part to a three headed monster that worked great in 2015, but not so much in 2016.

In past seasons Kelly had been cagey as well about who was calling plays when Chuck Martin ran the offense.  This is an about face.  Long hasn’t even spoken to the press yet as an official member of the Notre Dame coaching staff and Kelly has announced that he will be calling the plays.

Chip Long’s Limited Body of Work is Quite Good

Long called plays for Memphis this past season in his lone season as an OC and the results were quite good.  The Tigers ranked 16th in scoring with 38.8 points a game – nearly 8 points a game better than Notre Dame.  The Memphis passing attack was especially efficient ranking 19th in pass efficiency, 17th in completion percentage, and 14th in passing offense.  Uh oh, those are a lot of passing statistics.  I can sense the eyes rolling already,

Oh, Memphis was able to accomplish all of this despite replacing a first round NFL Draft – Paxton Lynch – at quarterback.  That experience will serve Long well in 2017 as Notre Dame works in first time starting quarterback Brandon Wimbush.  That also probably has a bunch of you wondering if Notre Dame will still be a pass happy offense in 2017 but that’s another topic.

It’s still very possible that this could be a short lived experiment for Brian Kelly if the offense struggles out of the gates, but on the surface it appears as though this is another positive development for Notre Dame as Brian Kelly assesses his program and what needs to be done to rebound from last year’s train wreck.

Add this on top of the impending restructuring of the Strength & Conditioning program after Kelly reportedly shuffled his long-time friend Paul Longo into a new role and it’s clear that Kelly is not playing favorites this off-season either.  Between Longo’s “new role” and Denbrock’s unceremonious departure, Kelly at least hasn’t been afraid to make some pragmatic changes this off-season.

Much More Remains to be Done

The work is just beginning for Kelly, Long, and the new offensive coaching that still needs a wide receivers coach to join the two along with Autry Denson and Harry Heistand.  For now, we know that the plan – at least for now – is for Long to call the plays.

Brian Kelly is facing a make or break type season in 2017 after last year’s 4-8 clunker.  With his back against the wall Kelly has nearly completely made over his staff and has given the keys to his offense, to a 33 year old offensive coordinator who was a graduate assistant at Arkansas the year before Kelly took over at Notre Dame.

Let that sink in for a second. 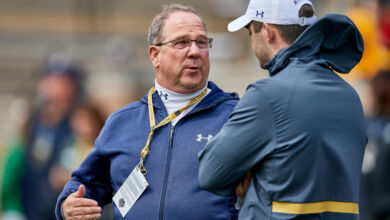 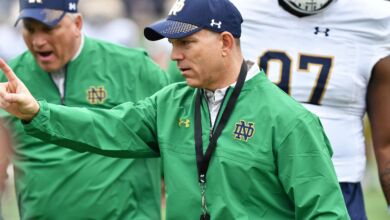