While Notre Dame got some great news on Friday night with the return of Drue Tranquill for a 5th year, the Irish also got a bit of news that could cause some uneasy stomachs in the coaches offices in the Gug for a little while.  Junior Tevon Coney told reporters that he is at least exploring his NFL options by requesting feedback from the NFL Advisory Committee.

Irish linebacker Te'von Coney on future: "It's something I have to think about."

The junior is weighing his options in regards to making the NFL leap or returning to Notre Dame for his senior season.https://t.co/Pqqq10EP6s

Tevon Coney became an absolute force in Mike Elko’s defense this year after not being much of a factor the last two seasons.  He led Notre Dame in tackles with 99 and tackles for loss with 13.  He added another 3.0 sacks as well.  Coming into the season, Coney had just 75 tackles in his career.  He did all of this while only starting 6 games.  Despite starting only half the games this season, he still was arguably the best linebacker on the roster and outshined teammate Nyles Morgan.

While this development obviously isn’t ideal, it also very well could just be Coney doing his due diligence in seeing how the NFL views his potential and to find out the areas of his game that the league thinks he needs to improve on.  NFL evaluations from the Advisory committee come with feedback attached so this could just be an exploratory mission.

Now, if the evaluation comes back with a high grade suggesting he would be drafted in the early rounds, odds are Coney could very well leave early for the NFL.  Given the relatively small body of work, however, that seems unlikely.  It seems much more likely that Coney is just seeing what he needs to improve on – in the eyes of the NFL – to be a high round pick in 2019.

Should Coney come back for the 2018 season, it would be very easy to see him be the highest drafted linebacker for Notre Dame since Manti Te’o.  Coney would be locked into a starting role in 2018 at either the BUCK or potentially the MIKE to take the place of Morgan.  Coney has the size to play the MIKE and displayed the playmaking ability required to man the position.  Mike Elko and Brian Kelly could decide they’d rather have a veteran manning the MIKE instead of a first time starter.

Coney would team with Drue Tranquill to form a hell of a duo in the linebacking corps for Notre Dame next year and his return is arguably even more important for Notre Dame’s potential success next season than that of juniors Josh Adams or Equanimeous St. Brown given the relative depth at both of those positions compared to the linebacker positions.  Jamir Jones, Jonathan Jones, and Asmar Bilal are the only other linebackers on the roster who have seen much game action.

This will certainly be a situation to watch as will that of Jerry Tillery who is a vital cog for the Notre Dame defense in 2018.  Tillery is also reportedly undecided on his future with regards to the NFL.  Should Notre Dame return both Coney and Tillery, along with Tranquill, Notre Dame will have the makings for hands down their best defense since the 2012 unit that ranked as one of the nation’s best. 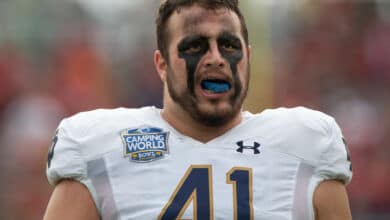 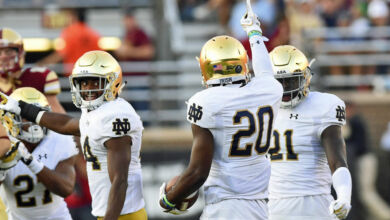