That one hurt folks.  That one hurt so much that my immediate overreactions are coming to you the morning after because last night I had nothing left in the tank to write. Notre Dame jumped out to an early lead, took the lead into half time, then fell behind only have a furious 4th quarter come back fall short.  It’s an all too familiar story for Notre Dame fans.  The Irish played well enough to win, but not clean enough to walk away victorious.

Brian Kelly didn’t have Notre Dame prepared for the environment

This one should be obvious to everyone, including Brian Kelly, but he did not have the Irish prepared for the situation.  For all the talk all week long about the practice conditions and all of the “road warrior” sound bites, Notre Dame looked ill-prepared for switching to the silent count when surprise, surprise, it was too loud.

Notre Dame had an embarrassing amount of procedural penalties throughout the night, and it started on the first drive.  This wasn’t “Miami 2017 deer in the headlights” bad, but it wasn’t a good look for Kelly who should have learned how to have his team prepared for such environments after ten years on the sidelines in South Bend.

Kelly’s mismanagement of the clock at the end of the first half showed that the head coach himself wasn’t ready for this one.  In a game where points were always going to be precious, Kelly squandered an opportunity for a touchdown.

Notre Dame still has to play in Ann Arbor next month, but after Michigan’s showing yesterday, there’s a good chance the Big House isn’t anything close to what Sanford Stadium was like last night. But still, Kelly has to go back to the drawing board – again – to figure out what he needs to do to have his team ready for this road environments.

That all happened on the first three drives of the game alone.

Notre Dame was missing fire-power on offense from the start with Jafar Armstrong, Michael Young, and Kevin Austin unavailable.  But we, and the Irish staff knew that from the jump.  The offensive line is a veteran unit for Notre Dame that could have made the difference.  Instead, the offensive line stalled drives and continually shot itself in the foot all night.

What made this all the more frustrating is that when they weren’t getting in their own way, they were taming the Georgia pass rush.  Georgia did not sack Ian Book once and had just three tackles for loss on the night.

The Notre Dame defense played their hearts out

While the offensive line had a disappointing night, the Irish defense played their damn hearts out last night.  Georgia has one of the nation’s best rushing attacks, and for about three quarters, the Irish defense bottled them up.  Then they wore down after the three-and-outs on offense mounted.  Even still, Notre Dame held Georiga to 23 points including a touchdown on a 3rd and long that was simply a perfect throw and incredible catch.

Notre Dame’s linebackers – specifically Drew White, Jeremiah Owusu-Koramoah, and Jack Lamb – played their best games of the year.  White specifically showed out last night.  JOK was JOK.  Some plays he got fooled, but he rebounded really well when he did and led Notre Dame with 2.5 tackles for loss. Lamb blew up a key third-down early in the game.  Those three backers combined for 5.5 of Notre Dame’s 6.0 TFL on the night.

Chip Long had a great first half, awful second half

I loved what Chip Long was doing in the first half.  He was creative and aggressive with his play calls.  He was missing some firepower, and he called a hell of a first-half that masked those deficiencies with misdirection.  We saw plays last night we never saw from Notre Dame before.  That was the first half.

In the second half, Chip Long got conservative.  Play after play after play was a pass that was designed to be at or near the line of scrimmage.  Once Notre Dame finally fell behind by two scores, he opened things up and called some downfield passes, and they worked.  It got Notre Dame back in the game.

Credit Georgia for adjusting to what Long was doing in the first half and taking it away, but at the same time, Long needs to be able to anticipate those adjustments and make his own to counteract them without having to waste an entire quarter where nothing works.

Getting Cole Kmet back was huge, but Irish need more playmakers back

In his first game of the year, we saw a glimpse of what this offense can do with an elite tight end.  Cole Kmet hauled in career highs of 9 receptions for 108 yards while scoring the first touchdown of his career.  Early on Kmet was the x-factor for the offense.  Then Georgia decided to take him out of the game, and he went quiet for a little before coming back alive on Notre Dame’s late touchdown drive.

Kmet wasn’t the only offensive playmaker Notre Dame had been playing without though.  Armstrong, Young, and Austin were all still unavailable.  With them, maybe Notre Dame wins this one.  That speaks to the lack of depth Notre Dame has at the skill positions right now.  That should change moving forward, but for the rest of the year, it highlights how critical it is to get Armstrong and Young back and keep them healthy.

Notre Dame struggled once again on 3rd down last night.  This time the Irish were 4 of 13 on third down a week after converting just 1 of 10 against New Mexico.  To win last night Notre Dame was always going to have to be better on third down, but they didn’t fare a whole lot better.

There were opportunities for Notre Dame to convert too.  Chris Finke, a 5th-year senior captain, dropped one sure first down on a third-down that turned into a Georgia interception.  A few drives later, he ran his 3rd down route short and then dropped the ball again.  Those are two plays that a 5th-year senior and captain can’t make and also highlight Notre Dame’s lack of firepower at the skill positions.

It was a frustrating night for Notre Dame because even with the injuries, even with the discrepancies in skill-position talent, it was all there for the taking for them.  They had every opportunity to win on the road against a top 5 SEC opponent.  They just couldn’t do it in the end.  It was an all too familiar story.

Highlights from Notre Dame's Near Miss: Irish Fall 17-23 to Georgia

5 Things I Liked in Notre Dame's 'Quality Loss' to Georgia 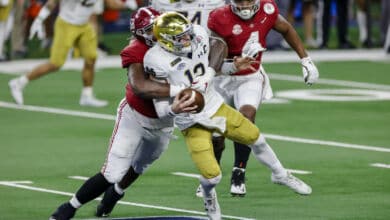