Ryan Harris is on schedule with his rehab
Starting left tackle Ryan Harris had been reduced to stationary bike duty for most of training camp, but has begun participating in drills and will begin contact drills on Thursday. Weis commented that Harris’s conditioning is very positive despite him being limited in what he can and can’t do thus far.

“As a matter of fact we just ran ten 80 yard gasers at the end and he ran all ten of them. More than anything else I was concerned about his conditioning and the fact that he ran all ten of them is encouraging. We’ve followed proper protocol. We started a day or two ago, I’m not sure, I think it was Thursday, he was allowed to start hitting bags and getting in a three point stance. He’s allowed to this Thursday start hitting people.”

James Aldridge Still not 100%
Freshman running back is still not at full strength. There’s been plenty of speculation on the internet as to whether Aldridge is either hurt worse than Weis is leading on to or whether he is actually not hurt much at all. For now, I’ll trust Weis’s assessment that Aldridge is hurt, but not seriously. If I had to pick a side in the conspiracy theories, I’d lean toward the thought that he’s hurt worse because Weis was similarly coy about Rhema McKnight last year, but that is pure, 100% speculation.

“Well, he’s not ready yet. You know, he’s running great, but he’s running straight great. As a running back you need to be able to run lateral. He’ll run straight with anybody. We’ll run sprints and he’ll run with anyone when it comes to sprints. I’m concerned with the plant and the pressure you put on with cuts.”

Wooden Having a Good Camp
One player who I think is really going to turn heads this year is Wooden. He drew praise for his hustle last year, but I think he is ready to become a legit lockdown corner for the Irish this year. He’s got all the tools and in his second season as a starter (and second under Bill Lewis) I think he is going to having a great season. Thus far in camp, Wooden has been performing well according to Weis:

“He’s had a good camp and one of the reasons, besides him working hard, is he has people breathing down his neck….. He’s been way better in camp this year than he was last year.”

Secondary Depth Improving
Much has been made of Notre Dame’s secondary this off-season. Most people point to the secondary, particularly the abundance of big plays surrendered by the secondary as the main road block to a Notre Dame national title in 2006. Weis has been nothing but positive about the secondary thus far in camp and that continued Saturday. Weis pointed out that the Irish will have 9 or 10 defensive backs capable of playing rather than the 4 or 5 he felt comfortable playing last year.

With the entire secondary back as well (as well as nickel back Leo Ferrine) as some of the younger players like Terrail Lambert, Ray Herring, David Bruton and Kyle McCarthy developing this summer it might not be all doom and gloom in the secondary as some have suggested. Throw into the mix the talent freshman including corners Raeshon McNeil and Darrin Walls and we should see a much improved secondary in 2006.

“I’ll give you an example. Terrail Lambert. He didn’t see the field very much last year. I’m not saying he’s a starter, but Terrail Lambert has had a great camp. I have a lot of confidence in him and I’ve told him that a number of times.”

Kicker Undecided
Weis hasn’t picked his starting kicker yet and doesn’t plan on doing so until the week of the Georgia Tech game. Kicker will be one of the most pivitol positions for the Irish last year as we saw just how important the position is even in a high powered offense in the Stanford game last year. Freshman Ryan Burkhart has the strongest leg of the group but Weis will be looking for consistency, not just a strong leg. Still, my money is on Burkhart to land the starting position come September 2.

“I won’t announce that till game week. Im charting everything that happens right there and the guy that is doing it the best and most consistent will be the guy that goes. Once again, I’m working a couple guys at kickoff and a couple guys at field goals every day, and I’m round robbing in things. You know, different guys are kicking it and here in the next few days instead of it being more of an open competition its going to start closing down some.“

Bragg Challenging for Time
Converted quarterback Darren Bragg has looked pretty good in the limited practice video that he has been shown in so far and is poised to challenge for playing time. Bragg is an intriguing prospect at wide receiver since he came to Notre Dame as a wide receiver but he has shown good speed and quickness to this point and could see significant time this year depending on how he continues to develop.

“He’s has a chance to be anywhere from four to ten. That’s where he can be. But the best part about that is you know who controls that? Him. I really don’t control that. He controls that.”

Anthony Fasano Getting Welcomed to NFL 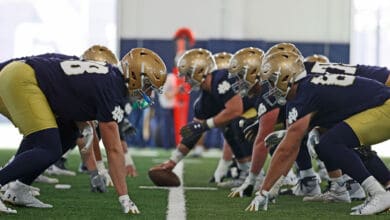 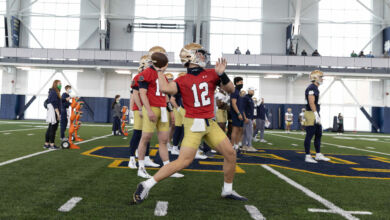 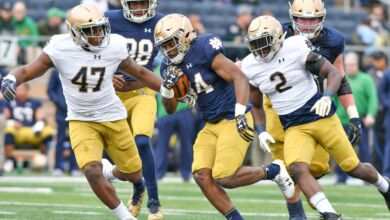