Notre Dame, IN (UHND.com) – Charlie Weis not only surprised the 80,000+ fans in Notre Dame Stadium and the millions of Irish fans watching on NBC when his 5th ranked team emerged from the tunnel wearing green jerseys yesterday, but he also surprised the team itself with only captains Brady Quinn, Tom Zbikowski, and Travis Thomas knowing it was coming.

“It gave an opportunity to let this special group of seniors, which we really feel that this is a special group, is kind of like our gift from the team, the coaching staff, the under classmen, to our seniors,” said Weis of why he had his team in green.

The idea behind the green jerseys, however, didn’t original with Charlie Weis – at least not Charlie Weis Sr. Weis’s son, Charlie Jr., came up with the idea last week and suggested it to his dad.

Weis said he was a bit apprehensive towards idea at first because the green jerseys are usually reserved for “when you’re playing against the No. 1 ranked team in the country,” as the Irish did last year in Weis’s first year when Southern Cal traveled to South Bend.

Charlie Jr. made a good case for the green jerseys with his dad. In his post game press conference, Weis said his son convinced him by saying, “Dad you tell me how special this senior class is. It just doesn’t seem right that they don’t get an opportunity to be honored as seniors going out.”

Before going ahead and ordering up the green jerseys for the locker room, Weis wanted to swing the idea by his captains.

Weis said he needed to call Quinn a “Whimp” because Quinn was a little leery of wearing the green jerseys against a team like Army, but eventually all three captains agreed to wear them. “As a matter of fact when I asked Quinn, he said that was the toughest question he was asked all week”

Quinn had a tough time keeping the secret from his roommate and best friend since seventh grade, safety Chinedum N’Dukwe. Nedu said after the game that, “”Brady did a good job. All the captains knew about it and did a good job. I am glad because it was a great surprise going into the locker room and seeing them out there.”

Ending the Jinx
Prior to beating Army this weekend, Notre Dame had lost its previous four games when they wore green jerseys, most notably last year against Southern Cal. Weis surprised his players last year as well when he busted out the green unis for then #1 ranked Southern Cal’s trip to Notre Dame. The game itself was one of the best regular season games in recent college football history, but unfortunately the Irish came up on the short side of the stick and lost 34-31.

Prior to the USC loss last year, the Irish lost to Boston College in 2002. The Irish entered the game 8-0 and were ranked in the top 3 when the Eagles came into South Bend and knocked starting quarterback Carlyle Holiday out of the game in the first half and then went on to win 14-7 ruining another national championship run for the Irish.

In Bob Davie’s second season as head coach at Notre Dame, he decided to let his players wear green for the 1999 Gator Bowl. Jarious Jackson was coming off the injury he suffered taking a safety against LSU in the final home game of 1998. Jackson and the Irish came up short, however, and lost 35-28 to Joe Hamilton and Georgia Tech.

The first game of the “jinx” came in 1995 when a 6-4-1 Irish team got an invite to the Fiesta Bowl against a very talented Colorado team led by Kordell Stewart, Heisman winner Rashaan Salaam, and Michael Westbrook. The Buffalos where heavily favored over the unranked Irish who were able to still make it to the Fiesta Bowl since there was no BCS or bowl coalition in the ’94 season.

With the “jinx” of the green jerseys over, Weis is not sure if or when he will use them again. “We won, so we got that out of the way, you know. So we can’t say, if we’re in the green, we’re going to lose, so at least they got that stigma out of the way. We’ll have to see how it goes,” was Weis’s answer when he was asked if he’d wear them again.

Heisman Most Likely Out of Brady Quinn’s Reach 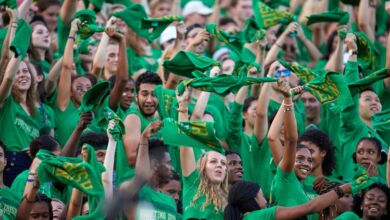 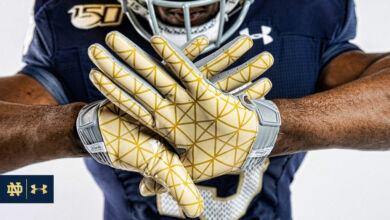 Is Notre Dame Destined for an Annual Green Out?