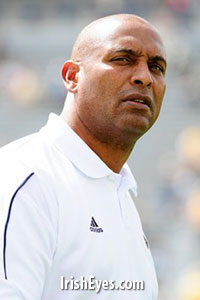 Notre Dame is 2-0 against former Irish head coach Tyrone Willingham since his departure after the 2004 season and now his tenure in Washington ending after being fired resigning a few weeks back, it appears as though current Notre Dame offensive coordinator Michael Haywood make end up with his old job.  It was reported Wednesday night by several sources, including the Seattle Post Intelligencer, that Haywood is interviewing for the open head coaching position at Washington.

Haywood, 44, missed the Irish practice Wednesday. He has the support of head coach Charlie Weis and was granted permission to visit the UW, a source within the Notre Dame athletic department said.

Still, Haywood’s name surfacing is a surprise for several reasons — none bigger than the facts he has no head coaching experience and was in his first year of calling plays before Weis reclaimed that duty last week before the Irish played Navy.

Weis said yesterday that Haywood would be missing practice time yesterday for personal reasons and that he supported Mike in the matter, but wouldn’t give details.  It seems obvious now that those personal reasons were to interview for the Washington position.  Haywood was up for a couple of head coaching positions the last few years, but has come up short each time.

Like the Seattle PI, I am a little surprised by this as well.  Not so much for the fact that Haywood is being interviewed, but because of the timing.  It seems likely that Washington’s search is not close to being over so its curious that Haywood is interviewing with two games left in the season.  Some Washington fans might be surprised by Haywood being a candidate, but when you consider how poorly of a job Willingham has done recruiting over the last four years, the Huskies might have a hard time attracting a big name for their vacancy.