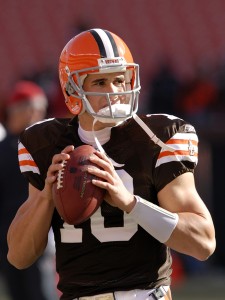 Yesterday I posted some comments Kellen Winslow made to Sirus Satellite Radio about the quarterback position in Cleveland and how he thought that Brady Quinn should be the Browns quarterback of the future.  According to Michael Lombardi of the National Football Post on Sunday, however, the Browns could likely end up trading Quinn in the near future.

I hear from more than one NFL team that the Browns have a No. 1 pick on the table for Brady Quinn and are looking for more. However, it appears to the teams that I’ve talked to that the Browns will make the move to trade Quinn. There seem to be two teams very interested. They also will move Braylon Edwards and have at least a No. 1 pick on the table right now. Expect the Browns to have their team reshaped by the time the draft ends.

There has been a lot of speculation this off-season that the new regime in Cleveland is not exactly enamored with Quinn as their QB of the future and it seems the talk won’t go away.

A trade from Cleveland would be bad news for Quinn in the sense that they were his hometown team and it was his dream to play for the Browns.  Depending on where he may potentially end up if he gets traded though, it could potentially be good news for him career wise.  There are multiple teams in the NFL who will head into the 2009 a quarterback short of being legit contenders – the Vikings and Jets the most prominent.

For Quinn’s sake though, most Notre Dame fans would probably rather see him win the starting job in Cleveland and turn into the top notch pro most of us were sure he’d be by now.  Personally though, I wouldn’t mind seeing Quinn wearing a green #10 jersey next season if Donovan McNabb ends up talking his way out of town this off-season.

"USC Could Face One Big Problem"

Beware of the Blue/Gold All Star... Sometimes - Part I