ESPN/ABC released the coverage map for this weekend’s game against USC and from the looks of it, a lot of Notre Dame fans are going to be watching the game online or shelling out $24 for ESPN’s Gameplan for the weekend.

Here’s the map with Notre Dame vs. USC in teal. 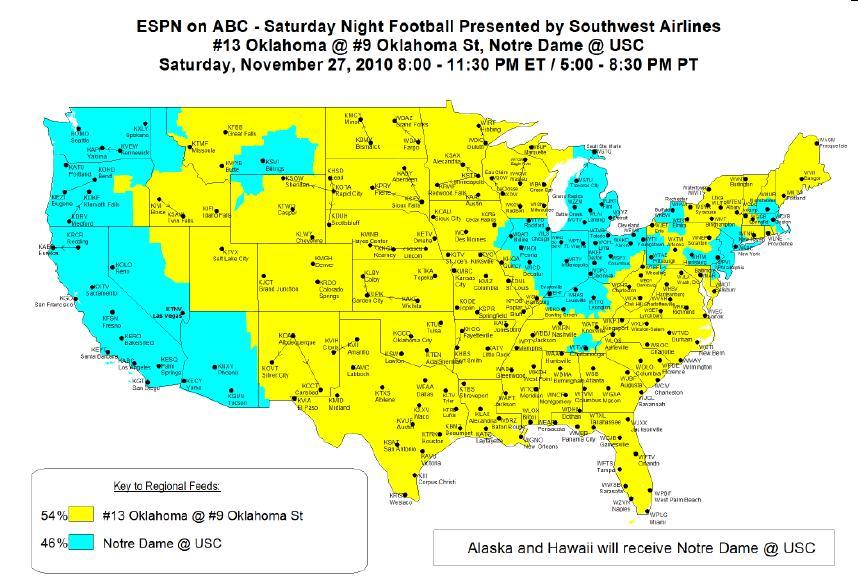 UPDATE (11/24/10 12:15 PM): As of Wednesday afternoon, Philadelphia, New York, and Pittsburgh ABC affiliates will be carrying the Notre Dame-USC game.  Alternatives for viewing in areas still carrying the Oklahoma-Oklahoma State game outlined below are still applicable.

As you can, most of the country will be getting Oklahoma and Oklahoma State outside of the west coast and parts of the Midwest including Chicago, Indiana, and Michigan.

Luckily, the game will be available on ESPN3.com for free for users whose internet service provider makes the service available to them.   If you are not lucky enough to have access to ESPN3, the game can be purchased as part of ESPN’s Gameplan.  The weekend pass runs $24 and is available through most cable providers.

There is also a chance that the map changes slightly by the end of the week.  In years past, some local ABC affiliates have changed their games when Notre Dame was not originally slated to be on their stations.

Never thought I’d see the day when a Notre Dame-USC game takes a backseat to Oklahoma-Oklahoma State, but this is what happens when the two teams come into the game with a combined a combined 9 losses are combining for 10 losses a season ago.

UPDATE: This coverage map is not on ESPN.com yet, but it was posted on the official USC website.

Riddick, Jones Back on Practice Field