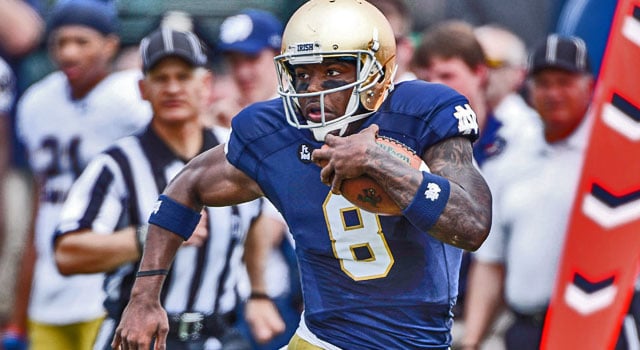 Throughout the spring quarterback competition, Notre Dame fans heard a lot from Malik Zaire.  They didn’t hear a word from Everett Golson.  Even after Golson announced his intentions to transfer last week, he did so through a statement – not by speaking to the media or by answering any questions.  And therein lies one of the key differences between Golson and Zaire.  One has tried to avoid the spotlight, the other  has been seeking it out.

The quarterback position at Notre Dame is one of the most high profile positions in all of college football.  With that attention comes the bright lights of the media and the scrutiny that some NFL quarterbacks don’t even see.  That was one area where Everett Golson struggled throughout his career at Notre Dame.  His media blackout during spring practice only highlighted his struggles in this department.

On the opposite end of the spectrum is Notre Dame’s new starting quarterback Malik Zaire.  Zaire was not shy to talk about wanting to be THE quarterback for Notre Dame to anyone with a microphone this spring.  He may have raised some eyebrows when he said that “there’s only one Jack Sparrow” and he wanted to be it for Notre Dame, but that confidence might just be what he needs to excel in the areas where Golson fell short.

Throughout Everett Golson’s career, he struggled when things started to breakdown as they did in the second half of the 2014 season.  While Notre Dame’s second half collapse was not solely the fault of Golson (far from it), he didn’t help matters much either once the turnovers started to mount before eventually being sat down in the second half against USC.

While the turnovers were the most obvious shortcoming for Golson in 2014, perhaps the most troublesome problem for the now former Notre Dame quarterback was his body language on the sidelines when things broke down.  There were times against both Northwestern and Louisville where Golson’s body language screamed that he had lost confidence in himself.  As the NBC cameras showed a somewhat surprisingly clam Brian Kelly trying to coach up his quarterback, the player he was talking to appeared to be staring out into space.

I’m not sure what’s more surprising there – Golson’s reaction or Kelly’s.  Even as the turnovers piled on top of each other, we rarely saw the purple faced Brian Kelly that routinely tore into Tommy Rees over the last few years.

Even as Golson’s body language and facial expressions on the sidelines looked like a quarterback who had lost all confidence in himself though, Kelly stood behind him and kept giving him chance after chance until finally making a move at half time against USC and then starting Malik Zaire against LSU in the Music City Bowl.

No one can argue that physically speaking, Golson has the better tools at this present moment.  Zaire’s got a big arm as we saw in the Blue and Gold game, but he doesn’t have Golson’s accuracy or experience.  Zaire also still makes decisions that the coaching staff describes as inexplicable based on the looks they throw his way in practice – an area where Golson did show improvement in 2014.  In fact, Notre Dame’s best chance for a playoff run in 2015 is almost unarguably with the Golson from the first half of 2014.

Where Zaire appears to have the edge, however, is in the intangible department.  Zaire’s bravado this spring and his lack of apprehension when stating his clear desire to be the one and only quarterback for Notre Dame when asked about a possible time share at the position was almost a bit cocky.  And that is a very good trait for a quarterback to have – to a certain extent anyway.

Zaire does not lack in confidence in himself.  Granted, Zaire hasn’t had to face too much adversity to this point although being removed from the Music City Bowl in the first half after engineering scoring drives is just the type of thing that could have derailed a young quarterback who wasn’t mentally strong.  Remember, Kelly was playing musical quarterbacks at times against LSU and even played both quarterbacks on the same drive at times.  For a young quarterback who has been aching to play, that is just the sort of thing that could destroy confidence and create a ton of frustration.  Zaire, however, handled the situation like a pro and stayed focused and engaged.

Contrast Zaire’s reaction in the LSU game to Everett Golson on the sideline against Michigan in his fourth career start when it was clear that he was lost and disengaged after being benched in favor of Tommy Rees after two early interceptions.

Now, Golson hasn’t always had that problem.  Against Alabama when everything that could go wrong, went wrong for Notre Dame; Golson was one of the few players on the field for the Irish that looked like they belonged.  Golson didn’t have a confidence problem Halloween night in 2012 in Norman or even in Tallahassee this past fall.

Something changed along the way though.  Even after he came back from his year long suspension, Golson looked clearly in control of the offense as Notre Dame raced off to a 6-0 start and falling just short of 7-0 against Florida State.  It wasn’t until things started to unravel in November that he looked lost on the sidelines.  That look that we saw against Michigan returned as the losses mounted and that smile we had seen earlier in the season never returned.

All of the confidence in the world won’t make up for inconsistent accuracy, bad decisions, or turnovers; but confidence can carry a young quarterback a long way – especially when they have enough time to prepare to be THE man like Zaire now is for Notre Dame.

We know Zaire has confidence in himself.  What we don’t know yet is if Zaire can have the kind of success he saw against LSU when a defense has time to fully prepare for him and the style of offense the Irish are likely to play with him at the helm.  Can Zaire stretch a defense?  We saw a glimpse of that ability with his bomb to Fuller but can he do that when defenses are throwing exotic looks at him?

Can he keep defenses honest enough with his arm so that the zone read plays he excels at are as effective as they were in the first against LSU?  He’ll have the weapons at his disposal to spread the ball around if he’s able to consistently make throws down the field. The Tigers adjusted at half time of the Music City Bowl and the zone read became less effective.  Now defenses will have all summer long to scout the limited film of Zaire.

These are all questions that we won’t know the answers to until Texas comes to town in September.  Until then we know that Zaire has gotten his wish to be the Captain Jack Sparrow for the Irish in 2015 and that he has all of the confidence needed to succeed in one of the most pressure packed positions in college sports.

In a few months we’ll know if he’s got the physical tools to carry the Irish on the playoff run its roster suggests its capable of making.