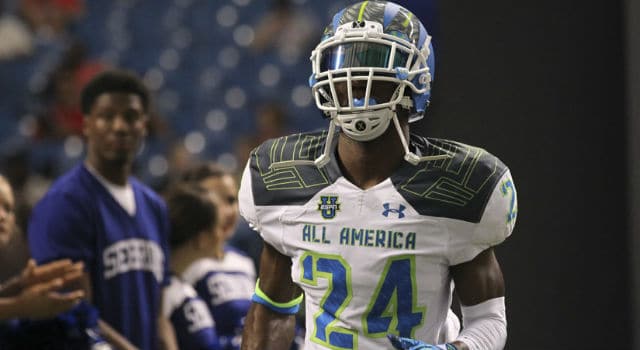 Notre Dame suffered its second season ending injury in as many weeks on Wednesday when true freshman cornerback Shaun Crawford reportedly suffered a torn ACL that will sideline him for the 2015 Notre Dame football season.

Normally when a true freshman cornerback suffers a season ending injury in training camp it’s unfortunate news but not too much of a hit to the depth chart.  Normally a 5’8″ corner doesn’t rocket up the depth chart in the first two weeks of camp either though.

Crawford was one of the fastest rising freshman in a class that has already been drawing rave reviews since hitting campus and taking part in fall camp.  As recently as this week, Crawford was working with the first team defense as the nickel back and would have likely been an opening day starter for the Irish if the defense came out in it’s base nickel package.  Despite lacking ideal size, Crawford had been very impressive in camp with his cover skills and recovery speed.

With Crawford out, Matthias Farley is likely to retain the role in which he played very well in a year ago.  Farley, a 5th year senior is the most versatile defender in the Irish secondary with the ability to play in the nickel or at safety where he has been a starter at times throughout his career including all 13 games during Notre Dame’s run to the national championship game in 2012.

Keivarae Russell, who was finally cleared by the NCAA this week, has also spent time at the nickel position to give Notre Dame some more flexibility as well.  How much Russell plays inside with Crawford out remains to be seen though.

Crawford’s injury makes the return of Farley for a 5th season all that much bigger for the Notre Dame defense.  Farley was one of Notre Dame’s biggest playmakers on defense a year ago from the nickel position so the Irish are in much better shape to sustain the loss of Crawford than they are at nose tackle following the loss of Jarron Jones.  In the case of Jones, Notre Dame is now reliant upon a true freshman, Jerry Tillery, and a sophomore, Daniel Cage, at one of the most physically demanding positions on the football field.

Crawford will retain a year of eligibility by sitting out the season, but based on his rapid ascent up the depth chart that 5th year might not matter if he comes back healthy and continues to develop at the pace has so far.

Avery Davis Injury Brutal for Him and Notre Dame Football