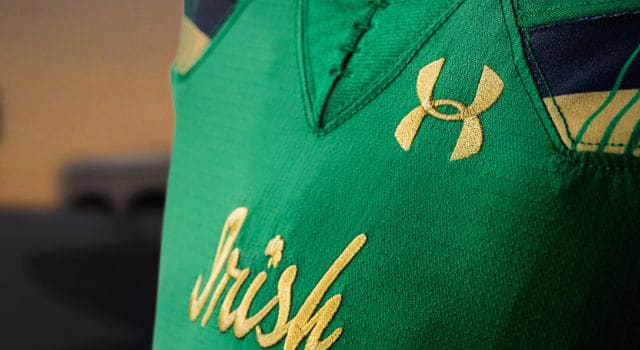 Notre Dame heads to Boston this weekend for a home game in Fenway Park against Boston College in this year’s Shamrock Series.  The Irish will look to remain undefeated in the Shamrock Series this weekend against the Eagles and hold on to their #4 position in the College Football Playoff Rankings.  Notre Dame will also be looking for their second 10 win season of the Brian Kelly Era this weekend which would make Kelly the first Irish head coach since Lou Holtz to have multiple 10 win seasons during his tenure.

Get your 2015 Notre Dame Shamrock Series Gear from Fanatics!

Here’s what the Fighting Irish have to do to make it all happen.

Notre Dame is walking into Boston, plastering its logo and signage all over historic Fenway Park, and playing a home game miles from Boston College’s campus.  In real world terms, Notre Dame is basically walking into Boston College’s favorite bar, walking right past them, grabbing its girlfriend and kissing her right in front of them and then turning around and smiling when they are done.  It would be naive to think that Boston College is not going to come out tomorrow extremely fired up.  Hell, Boston College comes out like world beaters any time they play Notre Dame let alone under these circumstances.

With that in mind the biggest thing Notre Dame needs to do is fight off the initial surge from Boston College and not let them gain too much early momentum.   On paper Notre Dame has more talent at pretty much every position and as long as they survive that early push from the Eagles, talent should take over.  If Notre Dame comes out and lets Boston College knock them on the ground after kissing its girlfriend in front of them though, well then things will get a little too close for comfort.  The good news here is that this is really not a good Boston College team so even if they do swing back and connect, it shouldn’t knock the Irish off their feet.

Air it out and get Will Fuller going early

We’ve all heard all week long about how great Boston College’s defense is, but that same defense gave up 420 yards through the air to Clemson’s Deshaun Watson earlier this season – Watson’s season best and the second highest total of his career.  So the Eagles defense is not invincible by any means.  With that being said, if Notre Dame tries to come out and play smashmouth football with the Eagles the way they tried against Temple a few weeks back, the offense might have a tougher time getting going.

With Stanford on the horizon next week, saving some hits on the running backs and the pounding on an offensive line that has been a bit banged up would be wise.  Notre Dame has the weapons to spread Boston College out and attack them through the air.  A week after Wake Forest kept All-American candidate Will Fuller in check, the Irish need to get their star receiver involved early.  Fuller caught just three passes for 37 yards last week and failed to reach the endone for just the second time this season while tying his season low in yardage.  Boston College doesn’t have anyone who can cover Fuller – get #7 the ball early and often.

Keep it simple on defense

There isn’t really a nice way to say this.  Boston College’s offense is bad.  Like really, really bad.  They average just 123.4 yards a game through the air and haven’t scored more than 17 points on a single FBS opponent this season.  In fact, take away their 76 point outburst against powerhouse Howard and Boston College is averaging 10.7 points a game – and even that includes the 24 points they scored against FCS opponent Maine.  They’ve been shut out twice at the hands of Florida State and Wake Forest.

While the Notre Dame defense hasn’t exactly been a juggernaut this season, this will be the worst offense they will have seen all season – perhaps by a wide margin.  With that in mind Notre Dame needs to keep things simple this weekend and just let its talent shut down the Boston College offense.  There shouldn’t be a need for too many all out blitzes or anything like that.  Just play sound defense this week and force Boston College to move the ball down the field.  They haven’t proven they can do it all year.

If Notre Dame forces Boston College into third and long situations, it will be a long evening for the Eagles offense.  Romeo Okwara has blossomed into a legit pass rushing threat on this defense with his sack outburst the last five weeks.  He should be able to generate pressure on Boston College and hopefully add to his steadily rising sack total which currently sits at 9.0.  If Okwara can pick up another sack or two this weekend, the senior defensive end will have Justin Tuck’s Notre Dame single season record in his sights in the season finale and post-season.

Get CJ Prosise some work, but not too much

Star running back CJ Prosise was cleared to play this week, but Notre Dame would be wise to ease him back into action and not let him take too many hits unless absolutely necessary.  It will be good to get Prosise some carries and used to taking some hits again before next weekend’s tilt with Stanford, but with Boston College’s tough run defense, this isn’t the type of game you want to throw him back into the mix full time in.  Josh Adams has back to back 140+ yard games and set a Notre Dame record last week with a 98 yard touchdown run.  Run the frosh again this week and see if he can top 100 yards for the third straight week.

Please throw to the tight end

This one is a recurring theme, but it certainly be nice to see Notre Dame get the tight end position involved in the passing game more.  If Boston College commits a safety to help cover Will Fuller as they should, the middle of the field should be open for Alize Jones to work.  Jones hasn’t caught a pass since his huge 45 yarder against Temple and it’s time to get the frosh more involved in the passing game.

Well, last weekend’s prediction was pretty off as I over estimated how many point the Irish offense would put up on Wake Forest.  This week I think the game will be closer than most.  Add a rivalry game that is almost more important to one side (ahem, BC), the take over of Fenway, and the possibility of Notre Dame overlooking Boston College with Stanford up next week and I would be lying if I said I wasn’t more worried about this game than any other this season with the exception of Clemson and Georgia Tech (since we all though the Jackets were a legit team at that time).

All that said, I expect this one to be close at half causing a meltdown on all of the Notre Dame message boards and major over reactions on Twitter – especially from Oklahoma fans.  Notre Dame’s talent will allow the Irish to pull away in the second half though.  I hope I’m wrong and Notre Dame comes out and dominates from the opening whistle but we’ve only seen that once this year and that game in week one.