On Saturday afternoon Notre Dame something they haven’t done in almost 30 years – they beat a top 15 team in back to back weeks and they did so in convincing fashion.  On the heels of a 49-14 beatdown of USC a week ago, the Irish dispatched a NC State Wolfpack team who thought they had arrived 35-14.  Two weeks, two top 15 ranked opponents, two wins by a combined 56 points.  That’s dominating folks.  That’s Notre Dame football 2017.

All we heard about all week long was NC State’s #6 ranked rush defense and how this game would be strength on strength and how Notre Dame could have a hard time running.  Someone forgot to tell that to the Notre Dame offensive line and Josh Adams.  Adams topped the century mark by half-time and finished with 202 yards including a customary 77 yard touchdown jaunt.  It was the 4th week in a row Adams ripped off a 70+ yard touchdown run.

As a team, Notre Dame ran for 318 yards.  Notre Dame’s 4th string running back – Deon McIntosh – ran for 63 yards on 11 carries in mop up duty.  Notre Dame stared down one of the nation’s best run defenses the last two seasons – statistically speaking – and said “we don’t care, we are gonna run right at you.”

Now that Notre Dame has run for 300+ yards in 6 of 8 contests this year this could get a bit glossed over but it shouldn’t.  In years past, Notre Dame would have gotten cute and tried trick plays and tried to air it out.  They didn’t do that yesterday.  They lined up and played smashmouth football and in this battle of strength vs. strength, they imposed their will on the #14 team in the country.

Brandon Wimbush was efficient and that’s all Notre Dame needed

I really thought this would be this week that Brandon Wimbush had a pretty stat sheet passing wise because I didn’t think Notre Dame would gash NC State like they did.  Wimbush didn’t need to use his arm much, but when he did he was efficient.  He only threw for 104 yards but he found the endzone twice on two beautifully thrown passes to Durham Smythe and Kevin Stepherson.

Now, Wimbush could have had over 200 yards if he connected on a few deep balls to Kevin Stepherson, Miles Boykin and Equanimeous St. Brown but it’s pretty clear he is still working on his downfield timing with Stepherson who was MIA the first four weeks of the season while supposedly not being suspended.  That timing will come and when it does this offense will be even more dangerous. Boykin may have come down with one too had he not been dragged down by a NC State defensive back in one of the most egregious pass interferences that wasn’t called.

What was encouraging this week with Wimbush was he didn’t look to run first.  He stayed in the pocket and went through his progressions more than we have seen in the past.  Some will complain that this shouldn’t be celebrated at this point, but this is still a first year quarterback who we are seeing develop week to week.  He is not a finished product by any means, but he is taking steps forward each week and that is important.

You could have fooled me as to which team had the vaunted run defense this week.  While Notre Dame gashed NC State for over 300, the Wolfpack managed a measly 50 yards on 24 carries yesterday.  That total isn’t being inflated by a lot of lost yardage for sacks either.  Notre Dame only got to Ryan Finley one time on the afternoon.  That total is just a product of Notre Dame’s sound tackling and swarming defense.

Tevon Coney played a major role again this week as Greer Martini was worked back into action and Coney led the Irish in tackles again.  He added another 9 this week and I am calling this now.  Tevon Coney will be an All-American linebacker for Notre Dame next season.  I have no question about that at this point.

The Notre Dame defense allowed just 7 points.  The last two weeks I thought each opponent would finally be the first to top 20 points on the Irish, but neither have.  Notre Dame also recorded the first interception of the season on Ryan Finley who was closing in on an NCAA record streak for passes without an interception.  Julian Love changed that with his second pick six of the season.

This team showed some mental toughness

The absolutely most crazy stat from yesterday was 7.  That number represented Notre Dame’s largest deficit of the season and it came after NC State blocked a punt in the endzone and recovered it for an early lead.  Notre Dame never trailed Georgia by more than one point.  We didn’t know how this team would respond to a little adversity since they hadn’t really experienced much of it this season.  And remember, this team last year frankly folded at the slightest bit of adversity. Notre Dame held leads in every loss last year except USC and in many cases they coughed up double digit leads.

We have known for a while that this year’s team is nothing like last year’s though and Notre Dame showed that again on Saturday.  After NC State took that early lead, the Irish didn’t flinch.  Notre Dame went 60 yards on two plays and tied the game 29 seconds later.

NC State retook the lead in the second quarter on a hell of a touchdown catch by Kelvin Harmon.  This time Notre Dame responded with a methodical 14 play, 72 yard touchdown drive to tie the game on the ensuing drive.  The Irish never looked back from there.

Instead of a seesaw game developing, Notre Dame’s defense forced a three and out and the Irish offense marched 60 yards on 8 plays to take its first lead of the game.  NC State wouldn’t score the rest of the day and Notre Dame would go on to record another win over a ranked opponent.

Last year’s NC State game was in many ways the 2016 season in a microcosm.  Terrible game plan, stubborn Brian Kelly, and players getting thrown under the bus by the head coach.  Mustipher had a bad game against NC State last year, but he was also asked to launch shotgun snaps in a damn hurricane all day.  He didn’t deserve to get thrown under the bus by his head coach afterwards, but he was.

Mustipher has been a monster in the middle of the offensive line all year long but gets overshadowed by Mike McGlinchey and Quenton Nelson.  Notre Dame keeps ripping off long runs right up the middle of the line thanks in large part to Sam Mustipher.  It happened again on Saturday.

Mustipher remembered the 2016 game and so did some of his teammates.  Just look at this Twitter interaction with Isaac Rochell. 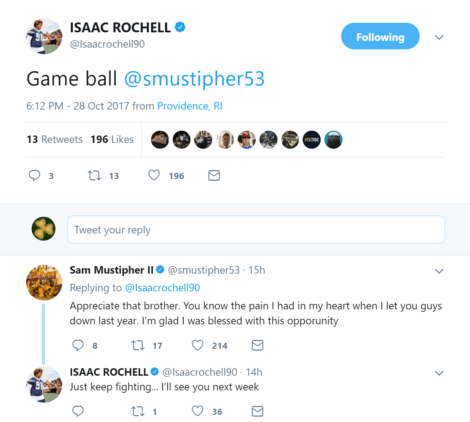 That is pretty special right there.  Hats off to Sam Mustipher for a hell of a game and for having one hell of a great attitude.  This kid will be playing on Sundays in the near future.  For Notre Dame’s sake, let’s just hope that is happening in 2019 and not 2018.