Notre Dame walked into Yankee Stadium yesterday in a home game hundreds of miles from Notre Dame Stadium and acted like they owned the place.  The Irish dominated from start to finish and are now just one game away from reaching the playoffs for the first time in program history thanks to a 36-3 beatdown of the previously #12 ranked Syracuse Orange.  Let’s crack open the post game 6er and enjoy this one.

1. Syracuse was struggling BEFORE Eric Dungey got hurt

The narrative that you will likely hear from Syracuse fans and Notre Dame haters is that it would have been a different story all together if Eric Dungey had not gotten hurt early on in this one.  And, while it is true that Dungey is a great player and would have made a difference, guess what?  Syracuse was struggling even before Dungey left the game with the back injury.

Syracuse’s first drive was a 3 and out featuring two incompletions.  Their second drive ended after one play with Dungey throwing an interception to Notre Dame safety Jalen Elliott. On their third drive, Dungey completed his first pass of the game to his own team one play before his injury.  At the time he left the game his stat line was 1 of 4 for 10 yards with an interception.

Now, this isn’t to disparage the kid in anyway whatsoever.  The point I am trying to make here is that if anyone wants to say that Syracuse was moving the ball at will and that Notre Dame got lucky that Dungey had to leave the game, that narrative simply isn’t true.

2. Kicking the field goals in the 4th quarter was ridiculous of Syracuse

With Notre Dame up 29-0 with less than 9 minutes remaining in the 4th quarter, Syracuse faced a 4th and 4 at the Notre Dame 5 yard line.  Instead of going for it, Dino Barbers decided to kick the field goal.  The football gods threw some well earned karma at Barbers when the 29 yard kick hit the upright.  If that wasn’t bad enough though, Barbers did the SAME thing with 15 seconds remaining.  Instead of going for a 4th and goal he kicked a field goal to avoid the shutout to try to save some face.

Now, Barbers explanation for why he kicked both field goals is even more ridiculous.  Essentially Barbers told reporters he did it out of concerns for player safety meaning if Syracuse ran a play in either situation a player on either side of the ball could get hurt.  Guess what is wrong with that logic though?  Assuming a successful field goal attempt, the very next play would be a kickoff which is widely considered one of the most dangerous plays in the game from a player safety standpoint.

Maybe if Barbers would have manned up and just said that he kicked the field goals to avoid the shut out I would have had a bit more respect for him.  To hide behind player safety concerns though when successful kick attempts result in the most dangerous play in the sport occuring was pretty much gutless.

3. Chase Claypool is really coming on at the end of the season

Based on his play the last few weeks and the chemistry he is building with Ian Book, I wrote in my preview post that I expected a big game from Chase Claypool again this week.  Claypool delivered with a six catch, 98 yard, 1 touchdown performance against Syracuse yesterday.  If you take out last week’s 1 catch, 12 yard outing with Brandon Wimbush at QB, Claypool has steadily been improving each week and becoming the wide receiver many felt he would become this year.

With yesterday’s output, Claypool is up to 43 receptions for 558 yards and 4 touchdowns this season.  Still modest numbers but considering he had just seven catches in the first three weeks of the season combined, that is a nice turnaround.

With Claypool’s size and speed, Notre Dame is really starting to use him well and not just asking him to run down the field and try to come up with jump balls like they had earlier in the year.  In the 7 games that Ian Book has started this season, Claypool has 35 of those 43 receptions, 446 of those 558 yards, and all 4 of the touchdowns.  Average that out over 12 games and you get 60 receptions, 764 yards, and 7 TDs.

Chip Long‘s play calling abilities have really come into the spotlight the last few weeks.  Ever since Book took over at quarterback and the passing game really opened up, we have gotten a glimpse into how creative and aggressive of a playcaller Chip Long really is.  We know he wants to run the ball, but when faced against a terrible pass defense, Long wanted to attack.  While Book is deadly accurate, it is also easy to be accurate when you are throwing to wide open receivers.  That’s what Chip Long’s play calling allowed for yesterday.

My favorite call of the day by Long, however, was the Jafar Armstrong touchdown run.  Getting Dexter Williams and Armstrong on the field at the same time is a mismatch nightmare for an opposing defense.  The play call got Williams headed one way which took the entire attention of the defense and then handed it to Armstrong headed the other direction for the easiest touchdown of his young career.

The reason I liked this play so much was because Notre Dame had been struggling in the redzone up until that point.  Long found a play that created misdirection and it was an easy score.

5. This game should have been even more lopsided than it was

I will get into the red zone offense much more in the 5 Things I Didn’t Like column this week, but for now it is suffice to say that if the Notre Dame red zone offense would have been able to finish off drives, this game should have been into the 50’s for Notre Dame.  The Irish had to settle for two field goals early on in the game, a 3rd first half drive ended in a failed 4th down attempt from the one, and another 3rd quarter drive ended at the 12.  Those four drives netted just 9 points out of a possible 28.

Notre Dame has been good in the redzone for most of the year so hopefully this was just a blip on the radar and nothing to worry about.  The 36-3 beating is already impressive, but if the Irish could have pushed that into the 40’s or 50’s perhaps we would all have completely ended the stupid “eye test” argument.

6. The running backs getting involved in the passing game is a great new wrinkle

Another aspect of the offense I expected to see utilized that came to fruition this week was getting the running backs more involved in the passing game.  Prior to Jafar Armstrong’s injury the running back was becoming a real weapon in the passing game.  After the injury it seemingly disappeared for a few weeks.  It returned this week very early into the game.  The Irish converted a 3rd and 15 on the second drive of the game with an 18 yard pass to Tony Jones Jr.  That drive was capped off with a 9 yard pass to Dexter Williams for a touchdown.

If Notre Dame can get the running backs even more involved in the passing game next week and into the postseason, the offense will only continue to evolve as we have seen it do all season long.  Jafar Armstrong specifically can be utilized in this area much more than he has been.  He was targeted a couple of times this weekend but didn’t come down with them.  Look to see him get more of those opportunities.

Beyond the Boxscore: Breaking Down Notre Dame's Blowout of #12 Syracuse 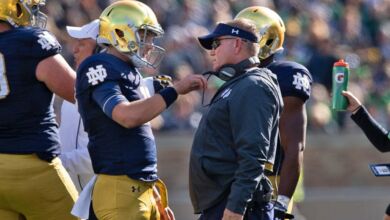