When the new redshirt rule was announced for the 2018 season, one thing became immediately clear for Notre Dame football.  Freshman quarterback Phil Jurkovec will play for Notre Dame this fall.  The question now is, just how much football with he play this fall?  Will the staff keep him within the limits of the new rule? Or will he simply be too good to keep off the field?

Here’s a quick summary for those unfamiliar with the new rule. The NCAA is now allowing freshmen to play in up to four games at any point in their true freshman seasons without losing a year of eligibility.  Previously, a true freshman was eligible to retain eligibility only if they didn’t play at all or if they played in the first four games and sustained an injury that caused them to miss the rest of the season. The latter applying to any player regardless of their year.

There was a good chance that Phil Jurkovec would have played in 2018 even without the new rule.  With it, there’s almost no way he doesn’t.

There are some who will be clamoring for him to start the second Brandon Wimbush throws his first interception this fall. Fans should have some patience here though.   Jurkovec’s Army All American Bowl performance showed that while he has an extremely high ceiling, he still has a lot of work to do.

Still, there is some belief that Phil Jurkovec will be able to challenge Ian Book for the backup role this fall already.  Should Jurkovec win that backup role, the Notre Dame coaching staff will have an interesting decision to make.  Either play Jurkovec in any mop up duty, or be strategic in when/where they use him to try and preserve that year of eligibility.

While Notre Dame has a pretty rough schedule this year with the likes of Michigan, Stanford, Virginia Tech, Florida State, and USC; they also have a number of games where the backup quarterback should play if the season goes as planned.  Ball State, Vanderbilt, Wake Forest, Navy, Syracuse, and Pitt are all games that a backup quarterback at Notre Dame should play in.  That alone is six games.

Last year Ian Book severed as the backup quarterback to Brandon Wimbush and played in 10 games with one start mixed in.  Book filled in for an injured Wimbush on the road against North Carolina.

Speaking of Wimbush, his development will likely be one of the determining factors in how much Jurkovec plays this fall. If he takes the necessary steps forward as a passer this fall, nether Jurkovec of Book will be called upon for much more than mop up duty or filling in for injury.  That, however, is a very big if and is the number one question facing Notre Dame football this fall.

[Related: Who will lead Notre Dame in receiving in 2018?]

If Wimbush is indeed a vastly improved passer actually, the need to preserve Jurkovec’s redshirt year becomes much more important.  Wimbush still has another year of eligibility left after this year.  Should he take a big step forward this year he would head into the 2019 season as the unquestioned starter. Again, a huge if right now but still a possibility.  Should that happen, Kelly and his staff will undoubtably want to preserve that year for Jurkovec.

What if Wimbush Doesn’t Improve?

Now the flip side outcome is also possible.  What if Wimbush doesn’t take the step forward?  What if the quarterback we saw against Stanford and Miami last November is the same quarterback that we see against Michigan and Stanford in September? If that’s the case, Kelly and staff will be forced to either turn to Book or Jurkovec.

Let’s say the worst case scenario for Notre Dame plays out.  Wimbush falters in September and Notre Dame has to turn to a backup and Jurkovec isn’t quite ready in October.  It will still be in Notre Dame’s best interest to get him as many snaps as possible to ready him for 2019.

What if Jurkovec Comes in and Lights it Up?

A year ago at this time, Jacob Eason was coming off an OK true freshman season for Georgia.  He then had to fight off a hot shot true freshman named Jake Fromme in camp.  He did just that through the summer.  His reign as starter was short lived though.  Eason was injured in the season opener and Fromme stepped in and grabbed a hold of the starting job.  After a “road” win at Notre Dame Stadium in his first career start and Fromme was off and running towards leading Georgia the College Football Playoff Championship game.

The same scenario is not all that far fetched for Notre Dame this fall.  At least in terms of the starting quarterback position, not necessarily the playoffs.

Brandon Wimbush makes a lot of plays with his legs and had a tendency to get banged up in 2017.  Wimbush left the Georgia game briefly for injury. He missed the entire North Carolina game allowing Book to start .  He also got banged up at home against Wake Forest running in for a touchdown.  Then there were the Miami, Stanford, and LSU games where he was pulled for ineffectiveness.

Should Jurkovec win the backup gig, he could easily see himself inserted into the lineup early in the year.  If he is and he performs well, Brian Kelly has shown in his career that he will go with the hot hand.

Freshman Have Taken Over at Notre Dame Before

We’ve seen this happen at Notre Dame before.  There have been a number of occurrences of true freshmen or redshirt freshmen getting earlier than expected opportunities.  No one thought Matt Lovecchio would start most of the games in 2000, but he did.  And he ended up guiding Notre Dame to the Fiesta Bowl.

No one thought Brady Quinn would unseat Carlyle Holiday after Holiday guided Notre Dame to 10 wins in 2002.  Quinn did, however when Holiday stumbled and then went on to rewrite the Notre Dame history books.

Just three years ago Malik Zaire lit up Texas in the 2015 season opener.  It looked like the start of a brilliant career. The next week he broke his ankle and Deshone Kizer stepped in and never really let go of the starting gig again.

So How Much Will Phil Jurkovec Play this Fall?

This is probably the second most difficult question to answer this off-season.  That’s because it requires answering the most difficult question first.  How improved is Brandon Wimbush really?  As Greg pointed out on Saturday, a lot of Wimbush’s problems in 2017 stemmed from indecisiveness that led to bad mechanics.  That actually gives me hope for Wimbush’s improvement in 2018.  It indicates that IF the game slows down for him, then the rest should follow.

I will say that Jurkovec plays exactly four games and retains his year of eligibility.  I think we’ll see him make his college debut in a September tuneup game.  From there on out, the staff will use him more strategically throughout the rest of the season.

The reason I see Jurkovec playing four games is I think we will see enough improvement from Wimbush this fall that Notre Dame will live and die with him each weekend.  We saw the moments of brilliance from him so we know what’s possible when he puts it all together.  If he starts putting it all together, Jurkovec will be given the time he needs to develop this fall.  If he doesn’t, well then all bets are off.

A Look at Notre Dame Football's New Starters in 2018 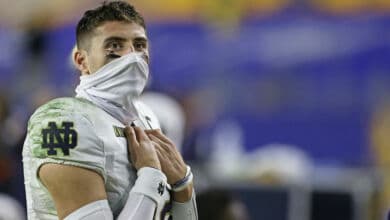 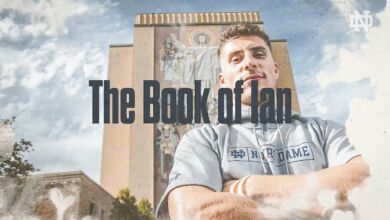