Penn State’s first visit to Notre Dame since the 1992 Snow Bowl in 2006 was the last time a Notre Dame home-opener had such ratings. Since then, Notre Dame’s had the following opponents before hosting Duke to start the 2020 season.

Notre Dame and NBC benefited from a lack of competition to score those ratings. The Big 10 and Pac 12 were both still sitting out the fall season as of last weekend, and the SEC doesn’t start its season until the weekend of September 26.

NBC will have to count on cable subscribers for another Notre Dame ratings win this weekend with the US Open and Premier League soccer conflicts pushing Notre Dame’s contest with South Florida to USA Network.

A lackluster slate of games this weekend could still help the Irish score another ratings win during the afternoon time slot, but #17 Miami vs. #18 Louisville in primetime on ABC should be the most watch game of the weekend.

It will be interesting to see how the numbers hold up for Notre Dame ratings-wise once the SEC starts their season in two weeks and if/when the Big 10 returns to play as has been speculated.

Here Are The Keys To Unlocking Notre Dame's Passing Attack 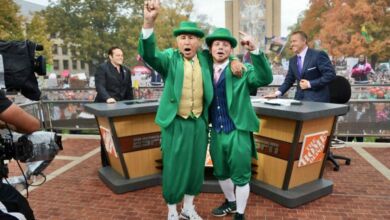