The 2020 season has been the ultimate introduction of Notre Dame’s stars to the rest of the country. Ian Book is being recognized as a winner after criticism all last year. Kyle Hamilton and JOK are both seen as 2 of the most athletic defenders in the country, and even Tommy Rees is gaining some credit as a play-caller.

Perhaps nobody has lacked recognition over the past three seasons more than the defensive coordinator Clark Lea who has turned the Irish defense into one of the most formidable units in the country, is finally getting that notice.

It appears that Lea interviewed for the Vanderbilt job on Saturday, which recently became open. Lea played fullback for the Commodores, and it is rumored he would happily accept the position if it were offered to him.

Lea’s name, as well as Coastal Carolina’s Jamey Chadwell, Army’s Jeff Monken, and Charlotte’s Will Healy, are current front runners, but the Vanderbilt AD has expressed interest in an offensive-minded coach.

Vanderbilt has also said it’s more concerned with picking the right coach than rushing a decision, so hopefully, that means Lea will at least be with the team through the season.

Notre Dame’s defense had become a joke under Brian Van Gorder and was mainly the reason for the miserable 2016 season that now seems it was a lifetime ago. Notre Dame’s talent on defense in 2015 covered up a lot of its then playcaller’s incompetence, but in 2016 the wheels came off.

Brian Kelly brought in Mike Elko, who immediately had an impact with help from his Linebacker’s coach Lea. Notre Dame’s defense improved in almost every category, including the 2, where it was worst at getting turnovers and getting pressure.

2017 was a success on defense, but Elko’s departure to Texas A&M after just one season left a question mark. Rather than start from scratch again, Kelly promoted Lea to the position.

It was a controversial decision at the time, being that Lea had no experience as a DC, but retrospectively it’s one of the best decisions Kelly has made at Notre Dame.

The D didn’t skip a beat as the Irish went undefeated until the CFP loss to Clemson. National media will never recognize it, but the Irish defense was actually holding their own against the eventual national champions until Julian Love went out of the game.

Notre Dame has found an identity with Lea as the DC having a defense that can not only hold its own but can bail out an offense that starts slowly from time-to-time.

2018 wins against Vanderbilt, Pitt, Northwestern, and 2019 wins against Virginia and Virginia Tech all probably would’ve been losses under Van Gorder.

With high-end NFL talent in JOK and Kyle Hamilton, Lea might have his best defense yet as the Irish are outstanding in every statistical category that matters.

The Irish lead the ACC in 3rd down defense, scoring defense, and rand 2nd in rush defense.

If the 2020 ND can count on anything, its defense will likely smother an opposing offense.

Lea certainly fits what Vanderbilt needs, and I personally think it would be crazy not to hire him, but it is rumored that they like Chadwell of Coastal Carolina at the moment. Nevertheless, Notre Dame has to be prepared for when Lea inevitably does receive a well-deserved head coaching job somewhere.

A talented coach like Lea being up for head coaching jobs is ultimately what you want as a fan because it means your team is hiring well. The big dogs in the sport like Ohio State and Alabama are replacing a coordinator almost every year.

A big part of Clemson’s success stems from its ability to hold onto its own talented DC, Brent Venables, who seems quite content as the DC of national power.

Lea was deep in the running to take over at BC last year and already interviewed with Vandy, so it would appear he is not content in his current role, so one would hope Notre Dame has some candidates in mind for a replacement.

No one on the current staff seems like a good fit for the position. Mike Elston has been with Kelly his entire tenure at ND, and if Kelly thought he had DC potential, he probably would already be it.

Mike Mickens has proven to be a solid recruiter, and that was primarily part of his hiring, but he’s only been with the team one year, and the corners don’t look significantly better than they did with Todd Lyght.

Terry Joseph has been with the team a few years, but if we are frank is probably not up for this promotion, nor would ND fans be happy with his appointment.

The Irish have been successful at promoting from within recently, but it appears the Irish might have to look outside of South Bend for a replacement.

One would hope they go for a hungry up and comer versus a veteran DC set in his ways. The disasters at LSU and Michigan with Bo Pelini and Don Brown should serve as a hiring warning to Kelly.

At the time, Clark Lea is still the defensive coordinator for Notre Dame and might be even after the season, so in the meantime, let’s enjoy watching his unit take the life out of opposing offenses at least a few more times. 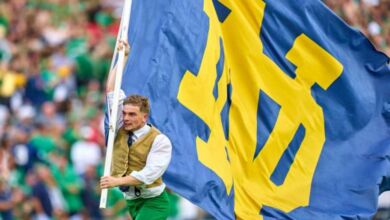 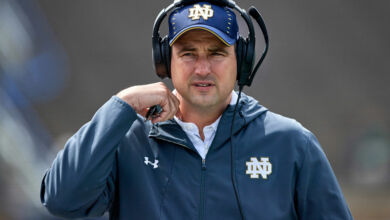 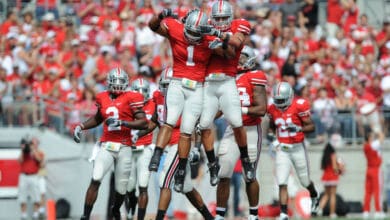 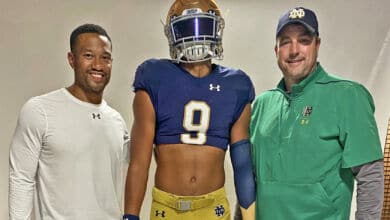