The Notre Dame Fighting Irish entered Friday’s Rose Bowl as heavy underdogs to the Alabama Crimson Tide and unfortunately lived down to oddsmakers expectations in a loss that ends their season at 10-2. The two defeats ending the season marked the first time since the disastrous 4-6 2016 season that the Irish have concluded a campaign that way.

Indicative of the entire 2020 college football season, the California-based Rose Bowl was moved to AT&T Stadium in Arlington, Texas because of the continuing issues related to the COVID-19 pandemic. Any hopes that the new surroundings might somehow help the Irish came up short.

Below are some key takeaways from Friday’s clash:

Alabama scored on each of their first three series and wasted little time in putting points on the board. In those three series. the Crimson Tide needed only a combined 18 plays and used only 7:14 of clock to put their 21 first-half points on the scoreboard. That was in contrast to the 15-play, 75-yard scoring drive by the Irish that took 8:03 and gave them their lone points in the first half.

Bama largely relied on the passing arm of Mac Jones to collect those three scores, with Jones completing 14 of 16 during the first two quarters for 182 yards and three touchdowns. Yet, Tide running back Najee Harris’ leaping 55-yard run helped set up Alabama’s second score and was part of a rapid five-play, 97-yard scoring drive.

After Alabama quickly notched their first two scores and the Irish had problems sustaining their offensive drives, the prospect of a rout appeared to be in the offing. Notre Dame then slowed things down as part of their 15-play scoring drive, picking up the score on fourth down after quarterback Ian Book had been stopped at the goal line.

While the Crimson Tide answered with another touchdown to boost their advantage back up to 14 points, the Irish defense held them on their last drive of the first half. With just 37 seconds remaining before intermission and the Irish starting at their own 11-yard line, Book managed to get Notre Dame into field goal position, but the three-point attempt came up short.

A 14-point halftime deficit was certainly not insurmountable for Notre Dame, but some key mistakes after the break helped seal the Irish’s fate. The first of these came after they had stopped Alabama on the first drive of the second half. The Irish got the ball back at their 10 and quickly picked up a pair of first downs. However, Book committed the first turnover of the game with an interception that gave the Crimson Tide the ball on their own 38.

Alabama converted that miscue into another touchdown, followed by a field to take a 31-7 advantage. Starting at their own 25, Notre Dame moved down the field and appeared to have scored on a scoring toss from Book to Michael Mayer. Unfortunately, the Irish were flagged for an illegal shift and eventually turned the ball over on downs, ending their final comeback bid.

One of Notre Dame’s main challenges in any victory attempt was to limit the damage from the passing combination of Mac Jones and DeVonta Smith, an effort didn’t succeed. By the time the game had ended, Jones and Smith had connected seven times for 130 yards, with Smith reaching the end zone on three of those grabs.

Jones entered the game as one of the most precise passers in college football history, completing 76.5 percent of his throws during the 2020 season. The Irish were on the receiving end of 25 Tide catches on 30 throws for a total of 297 yards, with Bama picking up plenty of yardage on passes across the middle.

Notre Dame finished the game with 375 yards of total offense, which was actually their third-lowest amount for a game this season. Yet, even that number was aided by the fact that 180 of those yards came during the fourth quarter, when the Irish were trailing by 24 points..

By that time, Alabama appeared to ease up on defense, allowing Notre Dame to pick up half of their 24 first downs for the day over those final 15 minutes. Yet despite having the ball for 30 plays and holding possession, the best that Notre Dame could do was a single touchdown in the final minute of the game.

With the chaotic 2020 season now at an end, the hope is that the end of the COVID-19 pandemic will have subsided by the 2021 season opener. That’s currently scheduled to be the Florida State Seminoles in a Labor Day road matchup.

Beyond the Boxscore: Breaking Down Notre Dame’s Blowout by Clemson 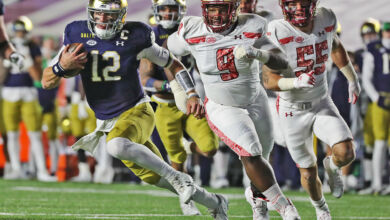