Targeting wide receivers makes a whole lot of sense for Notre Dame, given the lack of depth in the upper classes, thanks to the recruiting of the previous staff. With Braden Lenzy set to move on, Joe Wilkins in the transfer portal, and the uncertainty around Avery Davis and a potential 6th season, Notre Dame is looking at heading into the 2023 season with the junior-to-be trio of Jayden Thomas, Deion Colzie, and Lorenzo Styles and sophomore to be Tobias Merriweather along with an incoming quartet of freshman in the class of 2023. And that is all assuming there is no attrition from the Notre Dame wide receiver room.

Dante Cephas would be a potential electric receiver for the Irish. In 2021, he caught 82 passes for 1,240 yards with 9 touchdowns. His numbers fell off in 2022, along with the quarterback play at Kent State, but he still hauled in 48 passes for 744 and 3 touchdowns, averaging over 15 yards a reception in both seasons. No Notre Dame receiver with at least 10 catches averaged 15 yards this season – Deion Colzie averaged 16.3 on nine catches, and Tobias Merriweather had 41 on just one catch.

Notre Dame has some serious competition for Cephas, though. He tweeted out offers from Oklahoma, Kansas, Miami, Penn State, West Virginia, and Pitt already on Monday, in addition to Notre Dame. Cephas has two years of eligibility remaining.

Here are some of his highlights from his monster 2021 season.

Keagan Johnson burst onto the scene for the Hawkeyes in 2021 with 18 receptions for 352 yards and two touchdowns. In Iowa football terms, that might as well be 1,000 yards. He was limited to just two games in 2022, however, with a lingering hamstring injury that shouldn’t impact him in 2023.

Landing Johnson now could help write one of the recruiting errors of old wide receivers coach Del Alexander who never wanted more than three receivers in a single class. Notre Dame and Johnson had mutual interest when he was originally recruited, but the Irish were “full” at receiver in that cycle with Styles, Colzie, and Thomas and ultimately didn’t offer. It’s ironic now that Notre Dame is in pursuit in part because of the failures of Alexander on the recruiting trail.

Like Cephas, Johnson is a downfield threat. He averaged 19.6 yards a reception in 2021 for the Hawkeyes. It seems as though Notre Dame offensive coordinator Tommy Rees and head coach Marcus Freeman are targeting speedy downfield threats in the portal to supplement a roster that has a lot of bigger outside guys, but not a lot of elite downfield speed. Either Cephas or Johnson would certainly fill that need.

We know Notre Dame will be targeting a quarterback in the portal as well – we just don’t know for sure who yet. A lot of quarterbacks entered the portal on Monday – some of them very intriguing, like NC State’s Devin Leary. So far, however, there hasn’t been a lot of public reporting connecting Notre Dame to any one quarterback.

There will likely be more names from the 2022 Notre Dame roster to enter the portal in the coming days, along with more names connected to Notre Dame. By all reports, the Irish are expected to be more aggressive than they have been with the portal this off-season as Freeman looks to continue to upgrade the roster. 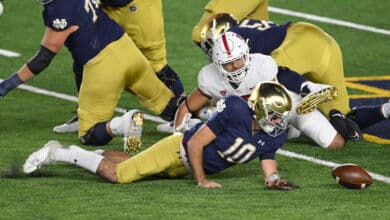 Beyond the Boxscore: Flat Notre Dame Jolted in Stunning Loss to Stanford