A Look Back at Every Notre Dame Shamrock Series Uniform

Later today Notre Dame will unveil the 2016 Shamrock Series uniforms and helmets.  When they do, half the fan base will rejoice while half will roll their eyes.  The Shamrock Series uniforms have been one of many points of contention among “old school” fans who cringe whenever they see them, but over the years there have been some excellent designs and innovative helmets.

Tonight’s uniforms will be the seventh in the series and the third iteration from Under Armour.  Notre Dame did not wear any special jerseys or helmets in 2009 for the first Shamrock Series against Washington State, but have worn unique uniforms ever since. Here’s a look back at all of them to whet your whistles until tonight’s announcement. 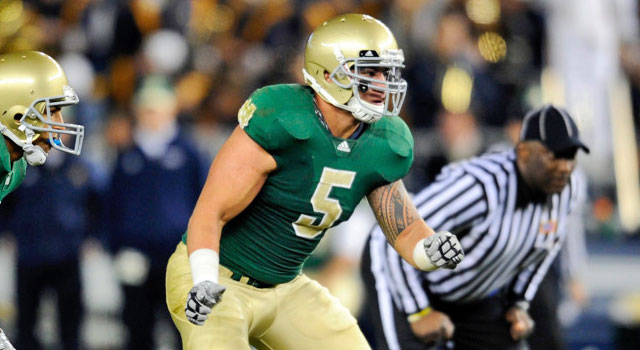 The first “special” Shamrock Series uniforms (above) were not unfamiliar to Notre Dame fans.  Notre Dame wore the same green jerseys in 2010 that they wore in both 2005 against USC and 2006 against the same Army program they faved in Yankee Stadium.  They kept the classic helmets – at least at the time – for the first go-round with special uniforms.  Aside from people complaining about wearing green jerseys against Army in a meaningless game, the jerseys didn’t ruffle too many feathers. 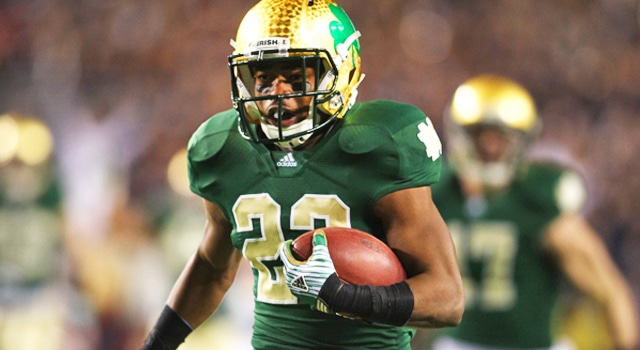 The feathers began to be ruffled in 2011 however when Notre Dame busted out some pretty wild helmets.  Not only did they have  foil stamp look to them, but they also included giant green shamrocks on the sides.  It was the first time that the Notre Dame helmet featured anything on them at all since 1964.  The Irish stuck with the same green jerseys from the year before, but this time no one seemed to care as much because oh the humanity of putting a shamrock on the helmet! 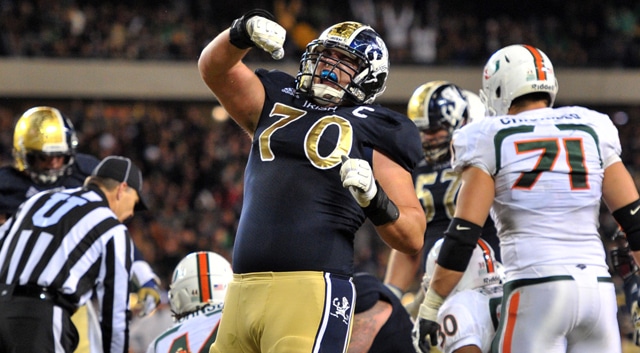 Ok, here is where things started to get fun.  In 2012, Notre Dame let adidas have some fun with the uniforms and as a result, Notre Dame wore gold pants with a blue strip with the Leprechaun featured on the side.  The jerseys weren’t too crazy although they were a touch darker than the normal navy and the numerals were a different font and in shinny gold.  The helmets took the 2011 design a step further with one side in gold and the other in navy.  The Leprechaun made another appearance on the helmet too.

To this day I still don’t know if I really liked these jerseys because they looked good or because they ticked off so many fans as much as they did.  Either way, I still rank these as one of the better Shamrock Series uniforms because it was so far out there and took a big chance. 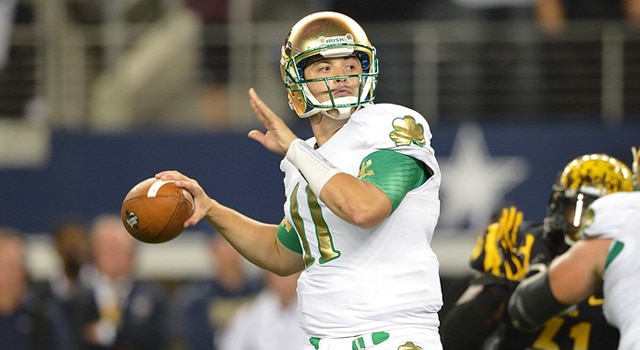 In adidas’s last Shamrock Series uniform before they lost the deal to Under Armour, they knocked it out of the park.  The 2013 jerseys were pretty much a perfect balance between a unique and flashy designed without being over the top like they were the year before.  The helmets the Irish wore in the 2013 Shamrock Series were hands down my favorite of the series and the white on white uniform combination was a good look for Notre Dame.

The one knock on these from some was the kelly green mixed in throughout mainly because some don’t like green being used in the jerseys.  if you’ve seen our new logo, you know that clearly I don’t feel that way.  I don’t own any Shamrock Series jersey, but if I did, it would be this one.

In Under Armour’s first attempt at the Shamrock Series uniform, they did a great job of designing a clean looking jersey that still appealed to the younger crowd.  The helmet featured the interlocking ND on the sides for the first time in Notre Dame history in addition to a pretty sweet looking matte finish.   Notre Dame also wore blue pants for a blue on blue look a year after donning the white on white look from 2013.

Notre Dame wore the same color jerseys and pants for the third year in a row with a green on green jersey/pants combination. Under Armour incorporated elements of Notre Dame’s storied past into the design of the jersey by using 11 slashes on each shoulder in reference to Notre Dame’s 11 national championships. The helmets, meanwhile, featured a styled Leprechaun.  These jerseys definitely caused some moans and groans from a good portion of the fan base, but the players loved them and recruits widely praised them when Notre Dame unveiled them.

With last year’s jerseys, Notre Dame has run out of colors to use for a single color scheme unless they bust out gold jerseys to go with gold pants later today.  Something tells me that is highly unlikely.  Although this tweet on Monday from Notre Dame might just be suggesting that.

It will be interesting to see if Under Armour pushes the envelope again this year or if we see a more conservative design this year.  Last year’s green on green combo was in part inspired by playing in Boston in front of the Green Monster.

It will be interesting to see if this year’s incorporate any of the history of Notre Dame – Army or any homages to the Army given they will be playing in a city – San Antonio – with a strong military presence.