Yesterday we took a look at future Notre Dame wide receiver Kevin Austin’s senior film as we dive into the senior films of all three of Notre Dame’s wide receiver signees.  Today we take a look at Micah Jones from Gurnee, Illinois.  Like Austin, he is already signed, sealed, and delivered as part of the early Signing Period.

Micah Jones has been a mainstay in the Irish recruiting class; he jumped aboard in February of 2017. There is disagreement about him as a player according to the recruiting services. 247 ranked him as a three star, and the 832nd ranked player in the country. Rivals lists him as a four star and the 179th ranked player, a smooth 653 player difference. Whatever the case, Irish coaches targeted him early and got him in the fold. 6-5 receivers with good athleticism almost always prove to have some value over time, even if they never become what we imagine.

Just as reference, another receiver who I liken Jones to below, Equanimeous St. Brown, was ranked 144th by Rivals out of high school. So if those two players end up being similar, I’d call that a win.

I’ve struggled with comparisons for Jones, but I’ve settled on current receiver Equanimeous St. Brown. Both possesses similar size and playing style. Jones is a big guy, but he’s pretty thin, and doesn’t carry a lot of bulk. For such a tall player, he isn’t the long strider that someone like Miles Boykin is, which helps in short areas and he has good quickness in and out of routes. Showed good strength in contested passes and is tough to bring down in the open field while one on one.

He’s the lowest ranked receiver, but I think that could be more a function of where he plays. Put him in Southern California with better teams and overall play and I think a ranking closer to St. Brown out of high school would be more accurate. The type of offense he plays in, with the quarterback he has, doesn’t really allow him to accumulate the type of numbers that generate attention. Plus, his athleticism isn’t off the charts.

Similar to St. Brown, Jones doesn’t have great top end speed, and St. Brown might even be faster than Jones in that regard. Can he get down the field in college? He’s not much a run after the catch player, except when in one on one situations against corners on look routes. He’s not the type of person you’d run a slant with and expect to weave through traffic or throw a screen to and look for a big gain. 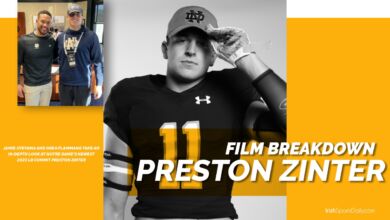 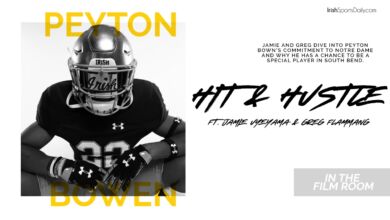